Here in the North, it is getting dark quickly and the end of the year – what a year – marches towards us.

It’s Friday evening, though, and time to cast a glance backwards at the week that’s just wrapped and the RPG news it contains.

As a result, Geek Native ran a feature on them… or tried to. They disbanded. Not in response to the interview quest, I note. Instead, I talk to Julio Tassinari formerly of Target Role to find what happens next.

It’s Geek Native’s Patrons who get to vote in each month’s RPG Publisher Spotlight and determine which creator gets featured. The poll for December is open, and even if you’re not a Patron, you can still see who has been nominated.

Did you know you can follow Geek Native via the Google News Reader?

Now on with with the tabletop RPG news! 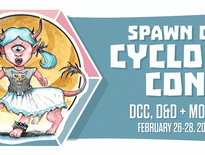 Sites Top 10: D&D Beyond had a record-setting Cyber…
wpDiscuzComment Author Info
Manage Cookie Consent
This site uses cookies 🍪, and links are ads that may earn bloggers some money 💰, and with this alert, I very much hope that these dark truths 🧌 are acknowledged.
Manage options Manage services Manage vendors Read more about these purposes
Preferences
{title} {title} {title}
Loading Comments...