[The following is a transcript of Audio EXP: #130]

Thanks to Patreons for voting. I’ve reached out to As If via email I found on their YouTube channel, no response yet, so I’ll try social media on Sunday. On Geek Native’s Instagram, you’ll find a reel of the live dice off, which settled the tie-breaker.

The company that used to own Battletech and Shadowrun but couldn’t make either commercially successful has been bought for $500m.

That company is Topps, who once owned WizKids, and they’re the Shadowrun bosses. Topps, instead, makes most of its money from trading cards, although I think they sell sweets to Americans as well.

Who are the buyers? The company is called Fanatics, another American brand and probably best known for clothes. However, their trading card business is worth $10bn. It just doesn’t have shop fronts, so it isn’t front of mind, but $10bn is a staggering figure. That’s three times the amount Asmodee was bought for.

Fanatics has secured some exclusive deals for sports cards in the States, so I think buying Topps is about buying up the marketplace.

Hasbro has a new boss, Brian Goldner, the old boss, sadly passed away last year after doing so well as the CEO.

The new boss is Chris Cocks. I saw some so-called D&D experts snigger at the name on Twitter as they read it for the first time. However, Chris has been the D&D boss for years, and he runs Wizards of the Coast.

That’s how important Wizards is to Hasbro and how well they’ve done; they’ve made the Wizards of the Coast boss the new big boss.

They’ve also confirmed that this means Wizards of the Coast will get a new boss. So, that’s D&D 5.5 coming up, and there will be a new captain on the ship. It’s hard to predict what that might mean; the new person might want to make their mark with more significant changes, play it safe with smaller ones or be hands off entirely.

Well, that’s the headlines covered off in record time. What else happened this week? Plenty!

Firstly, the Geek Native Discord is still in soft launch. That means I chat on it but have not been organising events. You’re free to join. I’ve been tweaking the structure and have added a channel for sharing cool stuff you might have found online such as tech, world-building inspiration, writing tips, etc.

One idea is to use this podcast to highlight discoveries from it. For now, I’ve kicked off with a nice visual summary of CES. You’ll find the link to that in the transcript via the show notes or, yes, in the Discord.

There are lots to find, as Wizards of the Coast’s new boss will soon find out. We have no shortage of games.

The 2021 write-up of What’s Hot in Indie TTRPGs calculates there were 8 new and complete roleplaying games released every day last year.

8 a day, wow. I thought my Kickstarter problem was terrible, but I’ve barely scratched the surface.

With so many RPGs coming, do any of them stand out? Anything worth saving your money for? The EN World community have been voting on it and have come up with their top 10. That’s right, here comes a list, and it’s the RPGs gamers are most looking forward to in 2022.

Growling into place in position 10 in the top ten is Werewolf: The Apocalypse 5th edition. That’s the 5th edition of World of Darkness, not 5e. I’ve moaned before and will again at how unhelpful WotC’s use of 5e as a name tag is.

In position 9, the fantasy Swords of the Serpentine from Pelgrane Press. That’ll use Gumshoe.

Then, in position 8, Cy-Borg the Mork Borg sci-fi from Stockholm Kartell.

Coming in at position 6, there’s Chaosium Basic Roleplaying powered Rivers of London, an urban supernatural thriller. It’s based on the hugely popular fiction by the same name.

Then, in position 5, there’s Mothership, a sci-fi horror from Tuesday Knight Games, which recently Kickstarted its first edition in book form.

In position 4, there’s the Kickstarter mega-smash-hit from Magpie Games and the Powered by the Apocalypse-powered Avatar Legends.

In position 3, Chaosium has another hit with the 6th edition of the Pendragon RPG.

I’ve backed Broken Tales, will stick with my current Pendragon sets, am tempted by Werewolf and Rivers of London.

Additionally, I’ll add the Cowboy Bebop RPG to my list; although I concede we’ll probably get a Kickstarter for it this year, it might be a 2023 delivery.

Those Dark Places is a heavy story game about the dangers and bleakness of space travel. Spacecraft are confining, hard to repair and scary places, but much better than the cold of space.

I think it’s surprising to get a skirmish game, but perhaps the contrast works well. I can see campaigns cleverly hopping from one to the other style of play.

A game that’s just around the corner, and out already in Germany because of the publisher is Dungeons, Dice & Danger. It’s a Roll & Write game, which means you roll to see what happens and then write it down – sounds obvious, but the mechanic often means you can play the game yourself.

The publisher is Ravensburger, and that’s news because here we have a big board game publisher edging closer to the roleplaying space. However, it’s also true that Roll & Write games started off safely as tabletop games and got closer to the RPG space.

It’s also news because the designer is none other than Richard Garfield. He invented KeyForge, and Vampire: The Eternal Struggle and, oh, Magic: The Gathering.

I really liked it. The rules are super-light and are light like narrative storytelling games. However, Nova leans heavily into the Destiny computer game and is all about action. Your character is hard as nails, impossible to kill and will kick butt.

It’s an innovative mix, and it works. I said so in the review published earlier this week on the blog.

All of which brings me to places you can go, in meatspace or cyberspace, to sample these games and find people to play them with you. I also updated the Geek Native convention calendar this week. I added more than 40 events then, and the total is nearer to 50 now.

We’ve events like Mars Con 2022, ConTingency and Fan Expo Portland coming up in the next two weeks.

If you play remotely and have been using the Astral tabletop to do so, there’s some good news. The DriveThruRPG-partnered virtual tabletop ceased development last year but did not cease operation. Now, in a New Years message, it has been revealed that the membership levels are stable and the hope is that it will continue.

Competition, which is fierce, in the virtual tabletop space is excellent for customers but challenges the operators. It’s not easy making money from them, even if they’re sticky and people are generally unwilling to leave after establishing themselves on one.

Gallant Knight Games has tested a new way to make money through a pre-order/crowdfunding hybrid called GallantFunding. They’ve succeeded on test one and with War of the Magi.

That’s a story in its own right, but another angle is Gallant Knight and the other RPG indies it works with to bring their games to market.

Imagine if companies like Gallant Knight or Modiphius offered their own crowdfunding options. Imagine is OneBookShelf and DriveThruRPG did it.

That’s looking more possible, and wouldn’t it change the hobby forever? Customers but also creators would have a very different landscape. I’m sure it would have its ups and downs, but hopefully more pros than cons.

Of course, another way to use crowdfunding is to rally fans for a legal assault. That’s what the latest group of people calling themselves TSR are doing. As discussed before, their first attempt ran into “you-did-it-wrong” problems but they have re-filed their case against Wizards of the Coast.

Sadly, they did it wrong again. I think it’s fair to speculate whether these errors have now burned through all the money their 100 or so backers gave them.

If they’ve corrected the latest mistakes, then the claims against Wizards of the Coast are the same. That’s that the name TSR is being tarnished by the legacy disclaimers on actual TSR products. According to some legal commentators, a hurdle they’ll have to cross is that new TSR has to argue they had no idea TSR was a games company when they bought the name. The American system doesn’t let you purchase old rights just to pick a fight with the legacy.

That might be why the new TSR admit they don’t think they can win the case. It’s not clear why they’re taking money from supporters anyway, if this case, but they are.

We know they don’t think they can win because an actual employee of the old TSR, the cartographer Darlene has spoken up about it.

Darlene has revealed that she’s been pressured into supporting the new TSR, even though she doesn’t want to and doesn’t like what they’re doing. Without Darlene’s backing, the new TSR thinks they’re doomed.

As a side note, Darlene created The Game Wizards head logo, and new TSR are using this without permission, she says.

Okay, okay, let us inject some more upbeat news. We have that.

Sean K. Reynolds, an actual D&D designer, has released the Five Moons RPG for free. All the supplements for it are free too.

It’s based on Pathfinder and D&D 3 but made quicker, easier and more straightforward. It did well during Kickstarter but had a laboured launch, and I think that stole some of its thunder.

DriveThruRPG publishers have access to new and expert advice from this week. Posthuman Studios’ Adam Jury has been hired by the platform to work as a creator rep there.

I asked what this means for Posthuman, and there are apparently no expected changes. I guess that makes him a frenemy with other publishers competing with games like Eclipse Phase, and I’m sure it’s a good talent appointment.

We’re still in bundle and sale season. There’s a few to mention before we wrap up.

Like The Expanse? That hard science sci-fi smash hit? The official RPG from Green Ronin Publishing is in The Bundle of Holding this week and next.

Indie publisher Sigil Stone has two OSR games there too; 5 Torches Deep and Vagabonds. Both are DTRPG best-sellers.

There are comic book deals of note over at Humble. One is the Abrams Comic Arts bundle which has award-winning stories like Parable of the Sower as well as non-fiction like graphics into the history of Magic: The Gathering. Another is from Ed Brubaker, the co-creator of The Winter Soldier. Ed has some of his indie titles on offer.

There’s no such sale for Pathfinder but the Storytellers Vault does have up to 35% off with New Year, New Story.

Lastly, there’s a new competition on Geek Native and it’s for UK listeners. If you’re any good at hidden object games, then I’ve two hardback copies of Boopers of the Borg to giveaway. Yep, the Star Trek baddies.

And on that note, let’s wrap there, beam up, and see you next week. 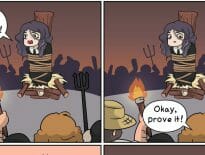 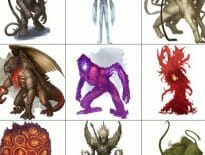 Art These are the D&D monsters created by AI
wpDiscuzComment Author Info
Manage Cookie Consent
This site uses cookies 🍪, and links are ads that may earn bloggers some money 💰, and with this alert, I very much hope that these dark truths 🧌 are acknowledged.
Manage options Manage services Manage vendors Read more about these purposes
Preferences
{title} {title} {title}