You are here: Home / Geek Stuff / Sites / Astral Tabletop stabilises its VTT user-base and will continue

Astral is a virtual tabletop for RPGs that ran into problems and announced it would cease development.

That didn’t mean it would close, just that it would stop developing and effectively be on a form of life support. The platform had been generous with its free access during the lockdown and had a partnership with DriveThruRPG but had struggled to take market share in the fiercely competitive world of VTTs.

Since we recently ceased new development and have shifted into maintenance only, I’m glad to announce that we’ve done well in the subsequent month, which is when we expected our drop-off rate to be the worst. Astral has weathered this first major hurdle well, and all signs are positive that we can continue to provide the current level of support going forward.

The lack of drop off suggests that users who are happy with Astral before the shuttering are still happy now. It’s indicative that virtual tabletops are “sticky” – gamers don’t want the hassle of leaving if they can avoid it.

The stickiness of VTTs was one of the challenges that Astral faced. Users turning away from Roll20 or Fantasy Grounds turned to Foundry rather than Astral, and there are other regarded alternatives such as the free for life and open-source Mythic Table. Demiplane has been cutting deals with big publishers such as Free League, Paizo and the World of Darkness and has a VTT deal with TaleSpire.

DriveThruRPG took up the maintenance of Astral, having a vested interest in the tightly coupled relationship between module marketplaces and VTTs. Fandom, which operates D&D Beyond, has disclosed their intent to build a marketplace for RPGs, bought a game site with Fanatical and seems to skirt ever closer to offering a VTT.

For now, Astral users don’t need to look for a new home. Future development remains an unknown but a possibility.

Astral Tabletop stabilises its VTT user-base and will continue 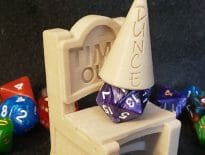