Do you like to have suitable background music playing in your tabletop RPG?

Some DMs use a musical score to add to the flavour to their game. Creepy music might be appropriate for characters trying to sneak through haunted tombs when they are underpowered for the area. An encounter with the fey folk might be all the more memorable with the right whimsical tunes.

A sudden change of music is a powerful way to get your players interested, grab their attention and let them know that something is about to happen.

Gamer Brian Davis has helpfully collected hundreds of different musical scores and tracks on Spotify. He’s put together hours of music and grouped them all into themes.

Hit Ctrl+F to bring up your browsers search functionality and see whether there’s some musical background suitable for your needs.

Ambient music is best in the background. Turn the volume down, so it doesn’t distract too much and let it play softly while you talk over it.

In this section, we’ve music suitable for exploring through caves, caverns and underground tunnels.

Ambience for forests, woodlands and trekking through trees.

Are your players walking through the mountains, the tops of hills, along through chasms or the steep valleys of the highlands?

Music appropriate for the mysterious, supernatural and magical. This collection of tracks will fit for most mystical encounters your PCs might face.

Sailing over the sea, or across the ocean (timely since Ghosts of Saltmarsh is just out) and encounters along the shore.

Backgrounds appropriate for bad weather; everything from tempests to gales, thunder and storms.

Atmosphere music is a little more noticeable than ambient music as it exerts itself a little more forcefully into the theme. In exchange, it’s a good tool for helping complement your descriptions of what the players can see, smell, touch, and hear.

Looking for tracks to play when the PCs are in a big city or bustling town? Perhaps the PCs are here to visit the Guilds, parliament or royal palace?

Background music suitable for trips to churches, temples and other large holy buildings.

The desert can be a hard place to describe other than by mentioning the sand, dunes, the extreme heat of the day or the cold of the night. These atmospheric tracks should help complement your DMing.

In games like Dungeons & Dragons the dungeon, of course, is a familiar setting for adventure. But what background music to put with it?

If your characters encounter the mercurial fairy-folk, they should remember it. The fae are often responsible for strange scenes, successes and problems for the PCs to deal with.

A visit to the town mayor or local noble. The manor could be the estate house outside the town or a big building inside.

A playlist of music for travelling along the road can help ease the challenges of describing the repetition to the players. Of course, when the familiar road music stops and the combat music starts… expect your players to sit up and take notice!

Drinks and games of chance. There might be live music, someone on the piano or perhaps even a singer. Prostitutes tout their wares and adventurers looking for a place suitable to relax and recover after their adventures.

More down to Earth than the Saloon, taverns focus on the necessities of food, drink and sleep. PCs could meet all sorts of interesting strangers in taverns; local merchants, guards, travellers and perhaps even ranger or two.

The town on market day is very different from the town at night or a quiet village but different again from the wild places outside the safety of the walls.

Danger lurks here. The shadows are the home to monsters intelligent or otherwise, brutal and cunning. Home of the Drow and final resting site of many a would-be hero.

The savanna or plains, woodlands and hills. The wild is not a place to let your guard down, and threats may come from bandits and robbers, goblins and orcs on the prowl or monsters roaming the lands.

The effect of suddenly playing combat music to players can be dramatic and is a favourite DM tip. Not ever melee is equal, though, and not every fight is fair.

Music to play when the big baddie makes their appearance. Whether this is the evil lord, the mad wizard at the top of the tower or campaign villain, a change of music is a good way to make sure the players sit up and notice.

A one-on-one fight with skill and, in theory, fairness. Duels do not have to be fought with rapiers (or pistols) but are fought when tension and passions are high.

Memorable, heroic and triumphant combat can make or break a gaming night. This is the music to play when the PCs swing the tide of battle, or when they ride to action in support of friends and allies, and then the stakes are high.

It won’t always go well for the PCs, and in some fights, it seems there can be no winner. If characters end up struggling against demons, unholy creatures from the grave, ghouls and other horrors then change the music.

Struggle is often at the heart of adventure, and many RPGs have no shortage of combat. Sword fights against raiders, ambushing trolls or being ambushed by minotaurs, there will be plenty of opportunities to use these combat tracks.

If a PC goes down in combat and the tide begins to turn against the heroes… change the music. Or if a giant towers above the party, a dragon approaches the defenders in the town or necromancer gains access to the crypts then let the PCs know they’re in for a tough fight.

Many RPG settings are cosmopolitan places packed with all sorts of races and creatures. Once your players associate a specific type of music, a track or two, with a monster type or race, then you can play it at your leisure to summon thoughts of those creatures back to your players’ minds.

These monsters are unnatural and out of place. Whether it’s Cthulhu, the dangerous Elder Brains, Fell Beasts or a Tonberry, these tracks will let your players know something is wrong.

Bears, griffins or even sabretooth attacks. These beast backing tracks will conjure up primal images and the threat of attack.

Powerful and deadly. Wise and ancient. Angry or patient beyond the understanding of mortal man.

Hill giants, cloud giants, frost or fire giants, and that’s just a start. These people tower above most groups of heroes.

Sneaky and sly, goblins should not be underestimated. While they might not be a challenge for a powerful or able group, these critters are a constant threat to travellers, traders and farmers.

Cackling laughter, sinister huts in the swamp and dark power. Hags are especially cunning and often a significant threat to would-be heroes.

Are orcs roaming tribes of uncivilised brutes? Barbaric? Or noble savages? Perhaps they’re wise in ways humanity can no longer see. In any case, orcs are likely to be the primary opponent in many a night’s tabletop gaming.

Some RPGs talk about different races of human, some present different cultures, whereas others put forth a homogenous view of humanity.

Ghouls, zombies, skeletons, vampires, ghosts and shambling corpses. Can your heroes kill what has already died?

If you can’t find something specific – or don’t need something so precise – as mood music for your game, then this list of themes, emotions and reactions will hopefully have something for you.

The characters are trying to investigate a haunted house, the remains of a dark ritual or occult ruin. Perhaps sinister magic is on the loose, nightmares are coming true, or the murderer has somehow managed to strike again.

It’s the final episode or the conclusion to the campaign or scenario. Make it clear to the players that things are wrapping up …

Success and high spirits. This collection of mood music is good for when the PCs are happy and relaxed.

The clues don’t add up, or there’s a puzzle the characters will have to solve.

Your players have a danger sense… get the most out of it. These ominous backing tracks will help heighten the players’ paranoia and help you set the scene.

Chatting to NPCs, shopping, riding through the pleasant countryside or down the well-patrolled King’s Road. Not every scene in an RPG is a fight or the promise of a fight.

What? How did that happen? Sometimes scenes just get or feel silly, unexpected or quirky, and that’s okay.

If you need your players to settle down and shut up, then play the right music. Let the background sound help clue your players off to the fact that things are getting serious for their characters or the NPCs in the game.

Will there be grave consequences for failure? Have things gone wrong, and the characters now face the depressing and gloomy new reality? If you need subdued or restrained background music.

Is something about to happen? If it isn’t the time to relax and is the time to be nervous, then this collection might help.

The characters have been victorious. They’ve conquered and are jubilant with their success, and you want to let them feel proud.

Brian Davis’s impressive collection of curated playlists for D&D and other games even includes some setting specific lists.

Barovia is the dark and sinister setting for Ravenloft in D&D. Curse of Strahd is the official 5e sourcebook for Ravenloft and a popular adventure.

Part of Faerun and the Forgotten Realms once cut off by the Spellplague and then reunited with the mainland, Chult draws adventures searching for danger and riches. In 5e’s the Tomb of Annihilation the heroes might end up in Chult.

A dystopian future in which mega-corporations are as powerful as governments and man finds new ways to interface with machine. There isn’t an official D&D cyberpunk setting but Carbon 2185 and GeneFunk 2090 are two popular Kickstarters that hope to bring 5e to the setting. Shadowrun 6e has been announced and the man who created the first and most iconic game in the genre, Mike Pondsmith is working on a new game.

The latest D&D adventure is Ghosts of Saltmarsh. It might just be you need some sea shanties sung in the background to your game.

Striving for a more cinematic RPG experience? Do you have characters chasing thieves across town roofs? Horseback chases in which the messenger must be stopped or a mad dash through the cavern to stop the goblin calling for help? Cue the chase music.

It may seem counter-intuitive, but sometimes you need noise to indicate the absence of noise. If player characters are trying to be stealthy and you want people to hush up then find the right track on this soundboard.

Man! Those are great.

I highly recomend you to check the app “DnDify”. You already have all the hard work done!

Are these all Non copyright?

Hi Gabby, I checked the Spotify page of several and they’re all marked copyright. So, while this means you can totally use them for your private tabletop games you shouldn’t use them for anything public or broadcast like YouTube or Twitch. 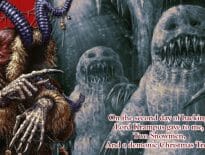 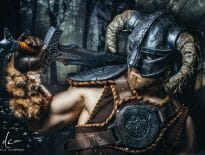