This is Audio EXP for the 22nd of October 2022, and the title of this episode is “Changes at the head of D&D”.

[The following is a transcript of Audio EXP: #169]

The interview with Dapper Rabbit is up, and we talk about Tales From Dungeon Deep which the Rabbit crew describe as an odd game, and we discover the indie publisher is angling towards computer games.

Geek Native has begun the traditional countdown to Halloween. It’s not the 12 Days of Christmas but the 12 Masks of Halloween. That started on October 19th with a simple but cult High-Rise Invasion killer mask.

That’s an anime in which people find themselves transported to a world of rope bridge-connected high-rises, and if getting around wasn’t scary enough, there’s a tribe of mask-wearing killers after them.

But it’s not Halloween yet, and there’s big behind-the-scenes D&D news to distract us. Later, we’ll touch on Wizards of the Coast alternatives.

Ray Winninger isn’t at Wizards of the Coast anymore.

He was the boss of D&D. We don’t know why he left, but we know that Dan Rawson was recently hired and in a newly created and more senior role. I called him digital Dan, and I’ve certainly seen speculation from fans on the digital future of D&D.

I’m not sure there should be any speculation. Wizards have been clear; D&D’s future is digital.

Ray says that gamers have not heard the last of him. It’s pretty common for ex-tabletop names to pick up computer game gigs as writers, directors and storytellers. The money is often better, and the terms kinder.

It’s possible, though I suspect not as likely, that Ray will go to another tabletop publisher. Where would he go? Paradox, the owner of the World of Darkness? CMON? A dramatic twist would be a move to Embracer, the group that now owns Asmodee, Edge, Dark Horse and many computer games.

There’s the important and hopefully good distraction of the D&D movie to catch gamers’ attention first. It’s not a surprise, though welcome, that Hasbro are flying the movie’s stars over to the United Kingdom for MCM London, aka London Comic Con.

What caught my eye in the press release was this bit;

Become a wizard, rogue, or fighter with a quick introduction to the Dungeons & Dragons RPG that leads into the recently released Starter Set: Dragons of Stormwreck Isle.

That sounds like a prequel to Dragons of Stormwreck Isle, even if it’s a small one. It may or may not get published later or given away for free as movie-supporting merch.

Some official but third-party D&D merch that also stood out this week is the D&D Sticker Art Puzzle book. Each of the 15 monsters is a jigsaw-like puzzle of over 100 stickers, and your successes combine to form a poster.

Let me stick with merch for one more story, as the Demogorgon pot fascinates me.

It’s a Stranger Thing Demogorgon which means Sarlac-like teeth-flaps that open up around the pot mouth. The suggested use for it is a pen pot, and I don’t need one more of those. Another is as a small plant pot, and I love the juxtaposition of monster flesh with the plant, but there are no drainage holes, so watch for that. Besides, I don’t need another plant pot. I still find myself wanting the weird-looking thing, though.

You can pre-order the D&D sticker book from Forbidden Planet or the Demogorgon pot from Truffle Shuffle, and the links are available from the transcript of this podcast episode.

I mentioned alternatives to Wizards of the Coast and speculated where Ray Winninger might go. The two big names this week might be new names to many. One is Mana Project Studio, and the other is Crowbar Creative.

Geek Native followers will know both. Mana Project with allies Fumble and Don’t Panic Games have launched the Cowboy Bebop RPG on Kickstarter this week. They’ve asked for €20,000 and have raised €265,000 from 2,356 backers with 25 days to go.

So, perhaps a gaggle of names there that not all tabletop gamers will have heard of before, but I think there’s a high chance all involved start 2023 with significance.

It’s not all about the money. Many people in this hobby are in it for the love of the game. Let’s call out 280-page and entirely free starter set for The Calling, a sci-fi god RPG.

Heck, there’s even now a free quickstart for Cowboy Bebop.

In bundle news, there are two GURPS offers at the Bundle of Holding, including GURPS Horror, which takes us back to Halloween.

Geek Native has two competitions running. One is for UK listeners only and is to win Horizon Zero Dawn: Peach Momoko Poster Portfolio. Peach is an incredible artist; I’d win this prize if I could! But I’m disqualified.

The other is over in a few days and is a digital bundle of the core rules of Babies and Broadswords with the adventure Crawl of Cthulhu. I’ve not been pushing that competition outside of gamer circles, so while you may have to rush to get it, you’ve a good chance of winning.

Lastly, just a reminder that there’s no Audio EXP next week. No podcast. I’ll be at an anime festival.

It looked like the energy crisis in the UK was going to ruin that holiday. The indie cinema hosting the week-long event suddenly went into administration, and I’m sorry that people lost their jobs. It cost £200,000 more to heat the building, and fewer people were visiting.

The good news is that a nearby cinema agreed to host the event but the charity running it now has had to pay twice. It’s a sign of the times, I fear.

So, let’s finish up there, support your locals, and I’ll see you the week after next. 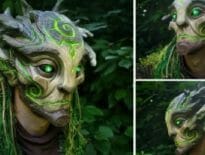 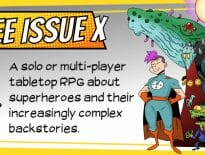