This is Audio EXP for the 15th of October 2022, and the title of this episode is “Assassins and Astroneers”.

[The following is a transcript of Audio EXP: #168]

I’ve got in touch with the Rabbit crew, got some initial questions, and will probably politely send a reminder shortly. Still, success!

How’s your week been? Mine’s been expensive. Amazon’s being clever by running a sale exclusive to Prime members. I try and shop local. Prime is getting more expensive, but this sale is a perk, and I bought some things, including a Bluetooth headset for Teams calls at work. I’ll find out next week whether that works.

I also bought a load of Pixel goodies after Google’s hardware event and am feeling guilty and poor as a result, but I wanted both headphones and a watch that lasted more than 30 minutes. Now I have both.

If anyone can tell me why the Fitbit app shows me burning about 1,000 calories more every day than Google Fit did and does, then I’ll be thankful. Are calories even real? As Has anyone ever seen a 5e stat block for them? No, I didn’t think so!

Despite all this shopping, there was some time for geeky news on the site. There’s the strangely understated news that CMON and their Guillotine Press imprint will publish an official Assassin’s Creed RPG.

We’re talking about some of the designers who made The One Ring so good.

Perhaps we’re just used to Assassin’s Creed everywhere, or perhaps it’s not 5e, or perhaps CMON isn’t close enough to the RPG community to be noticed.

Or did I just miss the buzz? Have you been in any chats about it?

I saw more excitement over the news that Titan Comics will release Astroneer Countdown.

That graphic novel will be based on Gearbox and System Era’s Astroneer computer game. It’s not a super new game, but it clearly has a loyal and devoted fanbase.

More franchise news? You betcha. Now, let’s see if I can pronounce this right. NieR: Automata is getting an anime.

I don’t know whether it’ll go straight to Steam or be picked up by Netflix or Crunchyroll, but I imagine Netflix are pleased with the results of Cyberpunk: Edgerunners and will be interested.

Not all cult game-to-anime projects have worked out well for Netflix, though. Did you watch the Ingress anime?

There’s even indie RPG news in among all this wheeling dealing. Nightfall Games have bought SINS.

SINS is a bit like gothic Exalted. Characters are supernatural creatures reborn to fight the undead.

There’s more D&D coming, more computer games that is, and from a company called Invoke Studios. Wizards of the Coast will have spent a lot of money rebranding Tuque Games, and I wonder why.

I can’t say Tuque, so that’s no good; straight off Invoke is better. I notice also dropping Games for Studio, which might be a nod to multimedia or entertainment projects. Invoke certainly, er, invokes more of a wizardy feel.

Or, am I overthinking it?

This week, and last, I also got to use my brain being Human… Almost. That’s a new pamphlet RPG from Egg Embry. That’s the same person who does all those interviews, crowdfunding news and other RPG columns.

I rather liked Human… Almost but I still call it Almost Human almost all of the time. It’s pretty similar.

Lastly, let’s finish up this quick summary with a look at some freebies and bundles.

A generous freebie is the Eternus quickstart. That’s a well-illustrated introduction to the coming Eternus game by Ben Redmond.

In bundles, there’s a Halloween-timed DCC Horror collection. If you can get there before the end of this weekend, that’s the 16th, there’s also all 23 scenarios run at the Mistaktonic Repository convention this year.

So, let’s close the page there, keep safe. Halloween is coming, and I’ll see you next week. 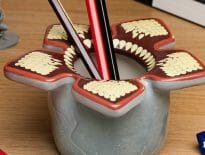 Geek Stuff Dramatic! Feed your pencils to this Stranger Thing… 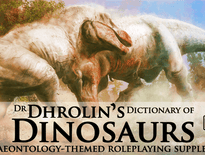