[The following is a transcript of Audio EXP: #145]

Good news. I have all sorts of good responses from Outland, but I’ve not yet written up the piece, and I’ll get it done before the end of the month.

If you’re a Patron then you can vote for next month’s winner. The candidates are;

Life is hectic right now. Given all that’s going on in the world, I can’t complain. I’m also now booked into my first RPG convention in years. I’ll be going to Tabletop Scotland in August.

Lemme know if you’re going too.

I’ll use the Events channel for live updates in the still-in-soft launch Geek Native Discord.

I’m also pumped for Love, Death + Robots which returns to Netflix for season 3 fairly soon. The first trailer is out.

The animated shorts are what happens when Deadpool’s Tim Miller collabs with Mindhunter’s David Fincher.

I’m also pumped for Midnight. What’s that now, three pumps? And on a podcast. Dear me!

Midnight is a 5e setting in which the Dark God won. I find it hard to get that excited by 5e settings now, and this is a second edition too, but I’m interested to see what Edge does with it.

Now, it’s been a big week for 5e, with D&D Direct happening.

Spelljammer: Adventures in Space is coming to 5e. That’s space-opera with flying ships that travel between planets. There will be three books;

A new Starter Set with digital integration and the adventure Dragons of Stormwreck Isle is coming.

A Dragonlance board game and adventure book are coming. I’m not sure, but I sense WotC is being a bit sly here as there’s something not quite lining up with the language they’re using to describe their plans.

A partnership with WizKids is bringing the board game D&D Onslaught, and WotC’s efforts will produce two physical Campaign Cases of terrain and creature tokens.

We know that the D&D movie will be called Honour Among Thieves, that improvements continue to happen to Baldur’s Gate 3 and that reminded me the game was still in Early Launch.

There’s also a Dragonslayer update coming to the MMORPG Neverwinter, and an actual play series with Deborah Ann Woll and other big names called Legends of the Multiverse will start this week.

What do you think of Wizards of the Coast’s directions and topics?

I can tell you that Alta Fox isn’t that pleased with the parent company, Hasbro.

To recap, the shareholders urged that Wizards of the Coast be spun-out and I suggested this was a precursor to sales plans.

Officially, Alta Fox has hit back with six questions, and some of them feel very personal. They’re singling out the brand new Wizards of the Coast boss Cynthia Williams.

These six questions are;

It feels like Hasbro is on choppy waters but hardly their fault. The company, thankfully, pulled out of Russia.

Combine that hit with lingering COVID-19 warehouse and shipping delays, and the next few months will be rough.

Prices will go up. I expect future D&D books will be more expensive, but I think they’ll include digital and have other form factors which will obscure the costs a little.

A more personal Ukraine invasion and money story comes from Steve Jackson Games. They and Munchkin artist John Kovalic have a fund-raising t-shirt on sale at Redbubble. It looks great.

But scammers have ripped off the art and are selling knock-offs. That means the Ukraine food charity gets nothing. What a double-scum thing to do.

I think Steamforged Games have had a rough time but are a good example of not being scum. Their new Dark Souls RPG is riddled with mistakes.

They’re owning the mess and have announced they’ll re-print and re-do it all. Steamforged Games did so quickly. Expensive, bold, but fair.

They also, this week, drew our attention to the first official RuneScape minis they’re releasing for the next RuneScape board game.

I’ll forgive them the distraction. It might have been planned news; it’s surely welcome news.

As with last week, I’ve been keeping my eyes open for freebies that might be worth looking at. There are a few more to consider this week.

Ahead of a Kickstarter launch, there’s Alan Tucker’s The Eye of Everywhere. That’s a sci-fi 5e with a portal and a disc of a city.

No Kickstarter in sight and with the final product out anyway, but only recently, Knight Errant Media has released a free jumpstart for Titan Effect: Declassified Edition.

Lastly, before I scurry off to do a walking challenge for Earth Day and turn my steps into trees, let me share some bundle news.

In the Bundle of Holding, there’s Zozer Games’ Cepheus Engine-powered sci-fi Hostile. Imagine the Aliens movie and you’ll get it.

And on that note, let’s wrap up there, save the planet and see you next week. 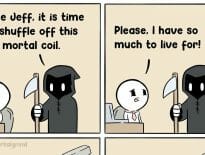 Comics The Immortal Grind: Living life to the fullest 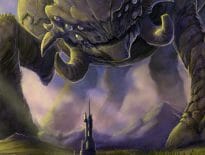