[The following is a transcript of Audio EXP: #86]

Last week, in this highlights podcast, I asked whether you had learned any real-life skills from playing games, and this week I’m going to start with stats about cheating on games.

An infographic created by the marketplace OnBuy revealed those puzzles that people cheat the most on. In this case, the definition of cheat is turn to Google for help.

The Water Temple in the Ocarina of Time is in 5th place, with about 183,500 people Googling their way out of that three-hour puzzle.

In 4th and 3rd place are two puzzles from Skyrim, with over 250,000 people needing helping with boiler rooms and other challenges there.

In 2nd place, there’s the Magic Lamp from the Witcher 3.

Then, in the top place, with more than 300,000 people searching for solutions, there are the Corridors of Time in Destiny 2.

That does surprise me. I used to play Destiny 2 back when I had time; although I never did raids, I can say the rest of the game is pretty well sign-posted.

What game has driven you to distraction the most?

Right, and on the topic of distractions and drama, let’s get into that as that’s what the title of this week’s show promised.

Drama one comes from the tail end of Zine Quest 3 when the guy who started it, Luke Crane, launched his own Kickstarter. Luke Crane is the well-known RPG talent behind The Burning Wheel. That’s a smart game, and the hobby owes it some respect.

Crane also works for Kickstarter. He was a boss in the game’s department, but now he’s Head of Community.

His project was an expensive Zine called the Perfect RPG. Confident, huh?

Well, he had reason to be. Crane had lined up a list of talent and the project funded within hours.

Then people noticed one of the contributors was Adam Koebel. Koebel had previously quit tabletop gaming publicity after getting death threats. He got death threats after running a sexually distressing scene, without permission, on a live stream.

The kicker? Crane hadn’t told his other contributors that Koebel was involved, and they were displeased.

Perfect RPG contributors began to back out of the project, at least insisting their name was removed, and people got increasingly frustrated.

Crane pulls the funded Kickstarter, noting that those contributors who hadn’t yet pulled out were harassed.

Harassing creators over social media is wrong. If Crane had intended to sneak Koebel in deliberately rather than accidentally, then that’s wrong too.

It’s the designers who swiftly pulled out of the project who’ve behaved responsibly in this mess. It’s a shame that they had to do anything at all.

The whole drama is one of those times I end up getting comments on the blog, which I like, but unable to approve any of them. The creeps came out in force. One guy called it a communist takeover.

I didn’t approve the comment because of other obscenities, but the idea that the free market in action was a communist takeover tickled me. What happened here is the exact opposite. People spoke with their money and with their keyboards. Lacking a mandate from the government to force the Kickstarter through, it was cancelled.

Zak S is an artist and game designer who had allegations made against him by his ex. These have not been proven in court. However, those companies who looked into them found enough reason to take action and, for example, Wizards of the Coast had his name purged from the credits of D&D.

Gen Con banned him from attending and publically reassured people they had done so.

Now, Zak S’s legal challenge is that the public nature of that ban has defamed his character and cost him money.

The artist has been litigious, and there’s a crowdfunder in place to help support the legal costs of his ex.

Drama number three was one I went looking for. I spoke to companies as large as Chaosium, savvy traders like All Rolled Up and indies like Imaginarium Games. I even talked to the Federation of Small Businesses, and it was conclusive; Brexit is making life harder for tabletop companies.

There’s no doubt that the impact of Covid-19 has obscured the impact of Brexit. There are companies with staff on furlough, for example.

However, it’s now harder and more expensive to get products in and out of the UK. That helps neither tabletop companies nor their customers. The FSB is suggesting the practical idea of raising the import and export threshold to £1,000.

Drama number four is sorted. It was a mistake. Previously, I reported that both Precis Intermedia and Wizards of the Coast had published competing copies of Palace of the Vampire Queen.

Now we know who really owns the license for the first-ever commercial D&D standalone adventure ever sold; it’s Precis. It was added to Wizards of the Coast’s catalogue on DriveThruRPG by mistake. Drama over.

The next bit of news isn’t a drama, but it’s absolutely connected to D&D. Robert J. Kuntz’s is a game designer and author who not only played in some of the first-ever D&D games, but he then went on to DM Gary Gygax.

Kuntz has not been liberal with his licensing agreements, but that’s beginning to change.

TLB Games and Legends of Role Playing now have permission to publish some of his original work, some of it never made public before and possibly dating back before 1974 and the release of D&D.

We had the 13th anniversary of Gary Gygax’s death this week. March 4th has become International GM’s Day or, as I’ve seen it called more recently, GM Appreciation Day. Both work for me.

DriveThruRPG and DMs Guild hold their most significant sales of the year; both are still on and offer up to 40% off on some games. When I took a look at the top 10 sellers in the sale at DriveThruRPG, I was pretty surprised.

Not a single one was a fantasy. The top 10 was dominated by horror and dystopian sci-fi. There was one superhero game.

What do you think that means? It is a reflection on society today? On the lockdown? Perhaps we’ve all bought our fantasy RPGs already, and a 40% sale is time to experiment with something else?

The best-seller, when I looked, was Cyberpunk RED.

You don’t have to spend money, though. This week Kevin Crawford made good on a Kickstarter promise and released the very impressive Worlds Without Number free download. That’s the fantasy sibling to Stars Without Number, although I suspect the clue is in the name.

Last week, we also chatted about virtual tabletops, marketplaces and looking for group sites. Well, they’re back in the news this week.

Adam Bradford, who set up D&D Beyond, which is now part of Fandom, left recently, and we now know where he went. He’s gone to a website called Demiplane.

Demiplane is a match-making site for gamers looking for groups or GMs looking for gamers. I touched on the math challenges for such sites last week. There’s a catch-22 that Bradford now needs to solve; he needs people to sign-up before it’s worth signing up.

If I was him, I’d absolutely be talking to conventions, Kickstarter and other organisations who already have an impressive reach and customers who are looking for group.

Demiplane doesn’t care which virtual tabletop if any, you use. However, the software requirements are relatively front and centre in their marketplace of games.

Those virtual tabletops are getting pretty impressive, by the way. Demeo demoed this week.

I can only describe that as a virtual virtual table. You can use your PC to use the interface and game associated with it, but it’s really designed to let you pop on your headset and look down over a virtual tabletop.

It’s a HeroQuest style approach to gaming but imagine being able to do that in a virtual space. Technology and tabletop gaming are merging.

This project, which will produce a $5 a month app and a free version, lets you create augmented reality maps and put digital assets – like monsters and special effects into it. You know how you can see Pokemon in the real-world through the lens of Pokemon Go? Yeah, Cartographr is like that but written with tabletop RPGs in mind.

It’s not a full-fledged virtual tabletop, though I imagine time and investment can take it there. It’s a companion piece. You could use it to see if a skeleton standing at your front door was within fireball range of where you are right now.

AboveVTT is a Chrome extension, no money required, that turns D&D Beyond into a virtual tabletop.

Once installed, and please remember there are security risks for every extension you add, you can visit the campaign section of D&D Beyond, activate the extension and begin a mashup of virtual tabletop assets.

Wizards of the Coast, who are now the digital bosses at Hasbro, are believed to be working on maybe 7 or 8 digital games too. We found out about another one this week, from Hidden Path Entertainment.

That’s a studio that usually does war-tactics games like Age of Empires, but working with Wizards of the Coast, they’re now starting a triple-A open-world, third-person adventure.

It’s not only Wizards of the Coast who are investing in digital. Monte Cook Games are too. They’re about to launch a Kickstarter for The Darkest House and they say it’s a new type of RPG product.

I have a concern that they’ve set the bar of expectations very high.

As Kickstarter hasn’t launched, they’ve not said that much more. We know it’s a digital product, but not a virtual tabletop, and it is, in fact, virtual tabletop agnostic.

Apparently, it’s a sort of Rosetta Stone, and you can even use it to introduce characters from different games. Well, I’m eager to take a look at it when it launches.

We’re getting to the end of the podcast but in recent weeks I’ve been highlighting bundle deals that have caught my eye. Let’s do that again before we move on.

First up, Runehammer Games have an Index Card RPG deal going on in the Bundle of Holding. Then, the second bundle that I think is worth looking at is a fantasy, horror and sci-fi fiction deal at Humble Bundle.

You’ll find the links in the transcript via the show notes.

As it’s the start of the month, it means the RPG Publisher Spotlight is on the move. If you’re a Geek Native patron, thank you, and you’ll get to vote for one of the following five companies;

The winner for March is  Dyskami Publishing Company, whom I’ll reach out to. In some ways, Dyskami is the reborn Guardians of Order who have a controversial past and allegations of bills unpaid. I’m a bit worried about this one, but I think offering Dyskami the chance to talk is the first step. It’s also worth noting that the Spotlight is intended to be publicity, not integration.

Lastly, and you’re among the first to find out about this, Geek Native has soft-launched a Discord server. You’ll find the link in the transcript. There’s a 10-minute cooldown on arrival and rules to agree to before you can speak, but you’re welcome to pop in and see if you like the vibe.

On that note, let’s wrap there, so please keep safe, stay out of melee range, and we’ll speak next week. 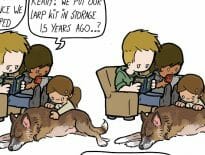 Comics Could Be Worse remembers LARP weapons in the lockd… 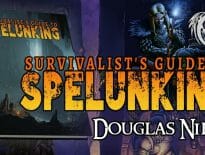