This is Audio EXP for the 12th of February 2022, and the title of this episode is “Wizards of the Coast to rent a private island”

[The following is a transcript of Audio EXP: #135]

Shawn Merwin is in the spotlight this month, as voted for by Patreons.

Guess what. Hands-up. I’ve not yet sent Shawn any questions. I will. I promise. It’s on me.

So, er, I need a distraction to move on.

If you’re looking for distractions or perhaps inspiration, then the Geek Native Discord, which is still in soft launch, has a new “curated inspiration” channel for sharing cool things that might become aspects of player characters or worlds. We’ve had designs for an actual colony on Mars, a Scottish mansion that’s protected by a massive box of chainmail, I swear that’s real, and new scientific development of a fabric that can both harvest energy and act as a screen at the same time.

The point of building £3 million worth of chainmail for a house is to protect it from the elements without locking all that moisture in.

This week, we have got an assortment of news but let us start with a quick trip to Crunchyroll’s Anime Awards 2022.

I was a judge. I swear that’s real news, too.

Attack on Titan won Anime of the Year for the first part of the final season.

Other shows that did well are;

The headline of this week’s podcast, Geek Native’s weekly highlights show, is Wizards to hire a private island.

It’s true and all okay; it’s part of a charity effort with Red Nose Day. The location is Osea Island which is in the Blackwater Estuary, in the UK. Winners of a charity draw go there, get to throw axes and play D&D with members of the actual play group Oxventure.

So, yeah, it’ll cost money unless Osea is donating the space, but it’s money for the greater good.

On the thorny subject of money, let’s briefly risk a flame war and talk NFTs. Both DriveThruRPG and Itch have come out as anti-NFT. Itch aggressively so.

I suggest there’s a risk of a flame war because this is a subject people are invested in. I mean that people have money in this debate in an absolute sense.

The concerns with NFTs, which on the surface seems like a good idea – a way to prove you own a digital thing – are complex, but my understanding is that there are two main reasons.

What about D&D and NFTs? Hasbro’s old boss did sound bullish on them and described them as a real opportunity. You can certainly see how they could allow people to pay fortunes to own the original digital version of Magic: the Gathering.

Let’s move on from NFT but stick with the idea of limited supply and demand. The pre-orders for the 5e-powered Dark Souls TTRPG is open.

Steamforged Games, the publisher, have also announced a Collectors Edition.

The pre-orders for that gold-trimmed book go live on the 16th, and there will only be 5,000 copies. 5,000 copies used to be a considerable number for RPG sales, so let’s see what happens.

I’ve seen plenty of debate around Dark Souls. People are either hyped or angry that it’s 5e. I see the reasons for a discussion, but an RPG engine choice should never be significant enough in your life to make you angry. Well. That’s my opinion, and I’m sharing it.

Personally, I think the system impacts gameplay, but systems can and should be adapted.

An example this week, is Wickerpunk. Geek Native has a free preview.

Wickerpunk is a rule and toolset that adapts the high fantasy of 5e to folk horror. It’s become an indie hit and a best seller on DriveThruRPG.

Indie gamers like it. There’s an overlapping Venn with people moaning about Dark Souls using 5e, but that doesn’t mean they’re wrong.

Dark Souls could have used a different system, and in a bit, we’ll talk about a Dark Souls-inspired RPG that does just that.

Let’s talk about new RPGs as there have been plenty of announcements this week.

Son of Oak Game Studios has announced a Kickstarter for Tokyo: Otherworld.

It’ll use a version of the RPG engine behind the City of Mist. In fact, Tokyo: Otherworld is set in an alternative future of the City of Mist. That’s a world in which people inherit mythic selves, like Thor, or Titania, or Medusa, and become part of a noir mystery.

Tokyo: Otherworld is that but cyberpunk-ish.

And Tokyo: Otherworld is just the first setting of the new :Otherworld series.

I think it’s a great move from Son of Oak.

Another system that’s growing and getting new titles is Monad Echo. You might not have heard of Monad before, as it’s hardly famous. It’s the engine behind Broken Tales from The World Anvil Publishing, and that was the second most highly anticipated RPG of the year as voted for by EN World readers.

This month, The World Anvil Publishing announced the Monad Echo SRD, allowing third-party creators to use it and profit from selling the associated games.

This is the dark fantasy inspired by Dark Souls and Bloodborne. It’ll be a game about Atonement, and playtesting is now open.

Yet another new RPG, and not a 5e-powered RPG, is Gran Meccanismo.

This clockpunk game is set in an alternative version of Florence, in which Machiavelli used the science of Leonardo da Vinci to advance the science of war and politics. It’s been published by Osprey Games.

If you’re tempted to get into publishing, it seems to be getting easier. Not only do we have platforms like DriveThruRPG and Itch, but other publishers are offering helping hands. For example, Izegrim Creations are currently offering $1,000 to a small scale indie publisher with the idea they like the best.

There’s no publishing deal, no transfer of ownership; just convince Rod that your idea is the best and the money is yours.

That’s not to say 5e has been stagnant or predictable. Well, we’ve already looked at innovations like Wickerpunk, but here’s another example; Everyday Heroes.

It’s the 20th anniversary of d20 Modern, and that was the old D&D system from two editions ago. d20 Modern was the contemporary setting version.

Everyday Heroes will mashup 5e with d20 Modern, and it has some of the original d20 Modern design team involved.

On the other side of the coin, there’s also a potential discussion about whether a game is so innovative whether you’d still consider it an RPG.

In the run-up to Valentine’s Day, I reviewed So You’re Dating a Kaiju. Even if I bought it as a solo RPG, I enjoyed it, and I think it’s better as a group game.

I’m not sure there’s any roleplaying, though. Instead, it’s a structured conversation in which you imagine what it might be like to date a giant creature.

You can grab So You’re Dating a Kaiju for a few bucks from DriveThruRPG.

Some innovations are just fun, clever and fall safely into the category of “why the heck not?”

A case in point is the latest addition to By Night Studio’s website. The Vampire: The Masquerade live-action roleplay shepherds are now selling Vampire Blood Tea.

It’s not really blood, no surprises, but a red coloured tea. What’s the harm?

Vampires will take us to the outro section of the podcast. Let’s start that with Humble and Dynamite who have a Vampirella deal.

It’s the usual shape of things, four-tiers, the lowest less than a quid and hundreds of dollars in retail value for only a few dozens at the top.

On the Bundle of Holding, there’s EABA. That’s the End All, Be All system from Greg Porter and with a name like that, it probably doesn’t suit a platform called Humble. However, it’s a good simulationist universal RPG engine and worth checking out if you’re looking for that.

Lastly, and also with a Valentine’s Day theme, there’s the third year of For Two. These are RPGs like Beak, Feather & Bone and Dead Friend designed for two people.

And on that note, let’s wrap there and see you next week.

Audio EXP: #135 – Wizards of the Coast to rent a private island 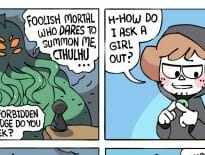 Comics Here’s why you should summon Cthulhu this Va… 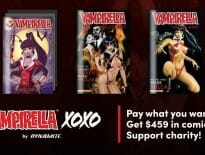