This is Audio EXP for the 5th of March 2022, and the title of this episode is “Platforms”

[The following is a transcript of Audio EXP: #138]

It’s a new month, so a refresh of the spotlight, and I’m already in touch with Wider Path Games.

It also means there are five more candidates for Patrons to pick from. They are;

The start of March also means International GM’s Day. That was on the 4th, but the sales at OneBookShelf’s stores, DriveThruRPG, Pathfinder Infinite, DMsGuild and Storytellers Vault are running for one more week.

I counted up over 90,000 RPG products in the discounts, showing how many people publish these days. Pathfinder Infinite still feels very new, but more than 400 downloads in the sales there.

While the bundles like GMing in Space are probably the headline deals, that one dropping over $50 worth of sci-fi tools to about $15, I took a look at the individual titles selling the best.

It’s just a snapshot in time, of course, as these charts are fluid until the sales are over, but when I did this research, here’s what comes out top.

At DriveThruRPG the top seller was Mongoose Publishing’s Traveller: Explorer’s Edition. The already cheap introduction to the sci-fi game in the sale is reduced to below $1.

At the DMsGuild, it’s Wizards of the Coast’s own Minsc and Boo’s Journal of Villainy.

Lastly, at the Storytellers Vault, a creator using the alias TableGoth has the best seller with their take on a V5 Vampire Player’s Guide.

So, that’s International’s GMs Day we’ve had, and we also had World Book Day this week. Next up is International Women’s Day, and I was pleased to see what Wizards of the Coast didn’t wait for the 8th of March, and the temptation of a PR-win and with much less fanfare announced that they’ve joined Women in Games.

Women in Games describe themselves as an activist group, but they want more women in the games industry, which seems like a modest request to me.

As far as tactics go, they seem able to sign up corporate backers like Wizards of the Coast, Rockstar, Outplay, Ubisoft, Riot and others who, I imagine, pledge to do better.

Of course, Wizards of the Coast are doing well enough when it comes to market share! Some might say they’re doing too well.

The latest and last for 2021 Orr Report is out and shows us just how dominant D&D is. The Orr Report is the write-up of what games people are playing on Roll20.

Dungeons & Dragons edged even higher, generally at the expense of Call of Cthulhu. However, Call of Cthulhu had been booming, so a drop might simply be a plateau of stability. The horror RPG is nearly twice as dominant as Pathfinder. And it’s Pathfinder 1e as the next highest named system.

Over half the people who use Roll20 use it to play D&D 5e, which is impressive, but then games like D&D need virtual tabletops more than games like Vampire the Masquerade.

You need digital maps to track battling kobolds for your online play more than you do to follow the dramas of undead politics.

Roll20 is one of the platforms getting a mention in today’s highlights podcast. While it shows how strong D&D is it’s also worth noting Roll20 has its own rivals, many of them, in fact.

One to watch is FoundryVTT. You do have to pay ongoing costs for server space if you want an always-on solution, but gamers seem to like the pay-once approach to the license and the functionality.

Foundry is in my mind this week because of a new gaming magazine called Crucible. Crucible is having a good run on Kickstarter right now and bravely promises a print version as well as PDF.

Actually, Crucible promises more than that. It will have a Foundry edition as well.

Now, how’s that for platform innovation? Using a VTT to distribute a magazine.

We’ll have to see how well that works but the PDF launch edition, Crucible 0, is currently free to download from DriveThruRPG.

The next bit of news is about another platform is of a type I spent much of 2021 debating. As you may recall, I think there’s gold in the hills of gaming subscription packages.

Clearly not in Google’s Stadia, but perhaps in other areas.

I think a Netflix of board games is a candidate, and I wonder if Xplored has an early runner.

Their system is called Teburu, and it’s a game board that connects to the internet to be your GM, control monsters, tell the story and update the display. Last week they had a World of Darkness deal. This week they’re with fellow Italian publishers Ares Games and plan to bring the popular Sword and Sorcery board game to the platform.

There’s a Kickstarter for their first game, The Bad Karmas, coming up, and that’ll be a good judge of public confidence. Over 3,000 people are watching the launch page right now.

Kickstarter, of course, is another platform. It’s also had its own battles with technology but had a good year. It’s also working wonders for prolific author Brandon Sanderson.

Sanderson flirted with clickbait with an announcement about coming clean. That turns out to be a book announcement and what seems to be a bit of a snub at the traditional publishing model. You don’t need Kickstarter if you’re using your usual publisher to bring your latest book to market, after all.

How much has Sanderson taken in the first week of the Kickstarter campaign? We’re above $23 million, and there’s nearly a month for that figure to grow.

But there’s one big platform story still go and it’s not measured in millions but billions. Crunchyroll was sold to Funimation’s owners for $1.2bn.

Now, Funimation’s library is being merged into Crunchyroll.

The official advice is that you don’t need accounts at both. If you have a Funimation account, delete that one. I’ve not yet because I’m waiting to see if the Sony tech teams can merge play histories and queues, and that’s not yet a thing.

Let’s outro with our usual look at interesting bundles, and I suppose those sites are platforms as well!

At the Bundle of Holding, there are two deals for TORG Eternity. That’s a rebooted RPG about realities and battles there.

On Fanatical, owned by the same people as D&D Beyond, but with a focus on computer games, there’s an Indie Must Play Bundle. Must Play bundles are for games with reaaaally high ratings.

There are two good ones on Humble as well. First up, there’s Oni Press who are celebrating 25 years of comics.

Next up, there’s a host of 5e content from Goodman Games.

Lastly, over at Itch, and with thousands of dollars worth of RPG content for a mere $5 there’s Trans Rights in Texas.

Sorry to outro with an example of what’s wrong in the world, but this generous offer is an example of how gamers can coordinate to try and fight back.

And on that note, let’s wrap there, keep fighting and see you next week. 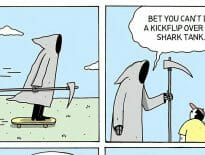 Comics When Death says, “I love my job” 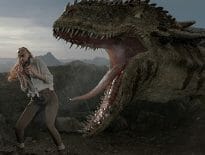