This is Audio EXP for the 20th of November 2021, and the title of this episode is “Mistakes, stupidity and bundle deals”

[The following is a transcript of Audio EXP: #123]

I finally got the Q&A over to Alan, but, er, my bad – I’ve not given him much time to respond. It’ll be my fault if we don’t get anything live this month, but I hope it doesn’t come to that.

This week we’re going to talk about mistakes, stupidity and bundle deals. There are a lot of bundle deals, and I guess it’s the time of year for it but let’s save those to last. We’ll find that we actually spend time talking about licences in this podcast. Perhaps they’re the unifying thread?

Let’s start with what may or may not be a mistake and find some silver linings.

Days before Star Trek: Discovery was returned, it was cancelled, and the old episodes vanished.

If you’re in the US, none of this is true. This is only true for everyone else. Netflix was home to Star Trek, but Paramount has grabbed the license and pulled it into Paramount+.

Of course, this is all business, and they’re perfectly entitled to. The problem? Paramount+ doesn’t work outside the US. That’s Paramount’s own restriction. The internet is global.

The studio says it’ll bring Star Trek and Star Trek: Discovery back at some point in 2022.

The silver lining is that not all Star Trek licenses are caught up in this. FOr example, Hero Collector and Eaglemoss have added three Discovery ships to their Star Trek Universe Collection. You can still buy the models, and if you’re a subscriber, you should still get them.

However, I don’t imagine other licensees like Eaglemoss are exceptionally thrilled with the news either. How can they sell this year’s Star Trek Discovery models if no one in the world, except people in the US with Paramount+, has seen them?

Well, we’ll see how that goes for Paramount. It’s a gamble, for sure.

Paizo President Jeff Alvarez apologies for exposing customer details on the forums, a breach of the company’s policies. There was also an apology for the company’s old travel rules, which were transphobic and have been changed.

Paizo is working with the new union these days, so we might still see more uncomfortable updates. They’ve said that they are being inspected, at their request, by the law firm Moritt Hock & Hamroff, because of other serious allegations. However, we are unlikely to get public updates due to those concerns’ personal and legal nature.

These bits of news follow on from the launch of Pathfinder Nexus, a partnership between Paizo and Demiplane that will provide virtual tabletop and digital tools to tabletop games.

Gosh, Demiplane is surging recently, isn’t it? Those are some excellent licenses to land.

I have to wonder what Paizo made of the news, tho. They could be excited. They got there first, and the more successful the Nexus program is, the stronger the brand “Pathfinder Nexus” will be. A rising tide lifts all boats.

However, they might be annoyed. Paizo might not have known that their marketing efforts would build the Nexus brand only for the World of Darkness to piggyback on.

I also took note that the deal was between the World of Darkness and Demiplane. Not been Renegade, the publisher, and Demiplane, or Paradox, the owner. I think this was the first time I’ve seen the “World of Darkness” referred to as an entity that makes deals. Well, so to speak.

Roll20 is the market leader, despite fierce competition, and they shared their roadmap at Roll20Con this month.

The mobile app is out. I suspect this will be important for new and younger gamers. If you have got a phone but not a laptop, then a mobile app is big news.

This feels like a good point to remember the newcomer Role. I must admit, I don’t hear too much about it, but it did raise nearly $3 million in August. So! Yes! One to watch.

As I mentioned, licenses seem to be the thread that binds the podcast this week.

Ludofilia, which might be better known as GameZone Miniatures, tried to run a Kickstarter for the 25th anniversary of HeroQuest a few years back.

It didn’t get far. Chaosium’s lawyers had something to say. Back then, Chaosium owned the trademark. Since then, they’ve sold it to Hasbro, who have crowdsourced their own return to the board game.

Now, Ludfilia says they’ve had but have renounced European trademarks on HeroQuest.

As a result, those of us in the UK and Europe can now pre-order the game.

I guess it was a mistake by GameZone to think they could ever produce a 25th-anniversary edition, even if they had some sort of trademark on the word itself. However, if they hadn’t tried, Hasbro might not have suspected there was still interest in the game.

A licensing deal that will take games away, at least in the short term, rather than make them available is the one between Rebellion and EN Publishing.

EN Publishing has not renewed Judge Dredd and the Worlds of 2000 AD. We don’t know who’s the decision this was. Still, since this edition of the Judge Dredd RPG entered the market, Rebellion has gotten into tabletop and even RPG production with Rebellion Unplugged.

If the big games company has taken back Judge Dredd, I hope they do something with it.

As it stands now, you won’t be able to buy Judge Dredd after March 2022.

Sometimes, though, old books come back.

Case in point is The Endless Stair.

The Endless Stair is Ed Greenwood’s first-ever published D&D module. Shortly after this adventure went to print in 1987, Greenwood went on to release the Forgotten Realms.

You can now print on-demand The Endless Stair from DriveThruRPG.

Sometimes books are just delayed. The example, in this case, is Nightfall Games’ Demon Dog.

This will be a Mork Borg-appropriate punk game, and it was heading to Kickstarter. It still is, but with Kickstarter’s crackdown on running too many projects at once, Nightfall needs to delay it until more SLA and Terminator product ships.

Now, I also mentioned stupidity in the headline. That stupidity is mine.

I feel a fool for not realising you can do this. You can visit Waterstones, and I imagine other websites for high street book shops, and buy signed books.

I assumed there were only two routes to a signed book;

It’s great to see you can buy them at really sensible prices just by popping them into your cart at a retail website. Once I made this discovery, I rushed to suggest it as a geeky Christmas gift idea.

Now, speaking about gifts and retail, here come the bundles and competitions, so buckle up. There’s a lot.

At Humble Bundle, we have;

At the Bundle of Holding, we have;

On Fanatical, there are loads of bundles, but the one I want to highlight is James Axler’s Deathlands which gets a host of sci-fi ebooks and three audiobooks as a bonus.

On Geek Native, there are two competitions.

There’s one to win Beyond the Fire, A Manual of Perilous Creatures from Across the Black Diaspora, Volume 1: Shapeshifters.

If nothing else, that might be the longest title in your library.

That’s designed to go with Flames of Freedom, and you can get the quickstart for that for free.

Lastly, with only a few days left to run and only for UK listeners, go to the blog to try and win Gears of War – Ephyra Rising. That’s the latest in the novel series, which must be good as the competition is popular.

On that note, let’s wrap there. Keep safe, beware of stalking license deals and see you next week. 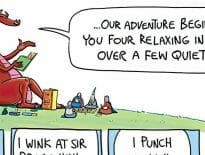 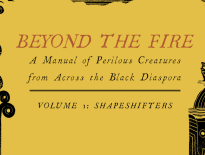 Tabletop & RPGs Competition: Beyond the Fire, A Manual of Perilous…
wpDiscuzComment Author Info