This is Audio EXP for the 25th of September 2021, and the title of this episode is “A week of big news”

[The following is a transcript of Audio EXP: #115]

Sanguine are probably best known for the RPG Ironclaw, but Netflix is making a series for Usagi Yojimbo, and Sanguine publishes the RPG, so maybe that will change. You can read my interview with Jason Holmgren of Sanguine over at the Geek Native blog.

This week we’re reading about state-controlled Chinese media beginning to get a bit worried whether certain forms of RPGs encourage belief in the paranormal. A Satanic Panic for 2021? Perhaps. The RPGs in question stray heavily into LARP territory, and some sound pretty hardcore.

China hasn’t taken action yet but do you know who did? GAMA.

In this case, GAMA wasn’t worried about ghosts. Wrong sort of white sheets over the head. They had an even more serious concern and banned a tabletop games company from Origins Games Fair with alleged connections to White Power.

GAMA’s statement doesn’t go that far. They say the publisher was banned after breaches of their ethics code. But, importantly, they did just kick someone out.

GAMA’s new logo has Diversity, Equity, and Inclusion written on it. But actions are louder than words, and this was the right sort of exclusion.

That was one small change in the tabletop landscape, except some more, but not really with RPG market share.

Perhaps the biggest change from Roll20’s quarter report was the infographic format. No one expected D&D 5e to be challenged in the top spot, and with over 50% of games played on Roll20 being D&D 5e, no other system does.

Uncategorised games, often homebrews, are in second place with fewer than 20% of games.

Next, there’s the Call of Cthulhu. In relative terms, Call of Cthulhu has had a jump. Chaosium is a slick operator, but Cthulhu games don’t tend to run for years by their very nature.

Roll20 suggests we watch Ironsworn as a candidate, and with solo play, I understand why. They mention Blades in the Dark, and with a TV series probably, I know why.

They also mention Mutants & Masterminds, and isn’t that a superhero RPG that’s been a long-lasting and stalwart hit for Green Ronin. I wonder how the upcoming official Marvel RPG will shake things up.

While China is worrying about RPGs corrupting their youth, GAMA is toughing up, and the RPG marketplace being a fierce knife fight for survival and market share; do you know what Geek Native has been doing?

All Patreons will get one in the post if I have your address. It’s not too late to join in, by the way, and if my supplies don’t dry out – so to speak – you can get a superhero rubber duck too!

The big news is €2bn worth of rumours around game giant Asmodee.

That’s the company that owns so many of the world’s most famous board games and some big RPGs like Star Wars and Legend of the Five Rings.

It’s owned by private equity, a type of company that makes money by buying and selling other companies. Sometimes they strip out assets on the way, sometimes they buy more, stick them together and hope that the sum of the parts is even larger than the pieces.

So, it’s likely that PAI will want to make a profit on Asmodee at some point. That doesn’t mean that these €2bn rumours this week are true. Nor does it mean there’s a buyer.

One piece of Asmodee news without speculation comes from Edge Studios, one of the companies they own.

Edge inherited the RPGs from Fantasy Flight Games, including Legend of the Five Rings. At Gen Con, the studio announced a 5e version of L5R was coming.

The book will be called Adventures in Rokugan and the company, which still doesn’t have an English language website, insists there will be no change to the current L5R line.

In other words, the D&D’s 5e system applied to L5R via Adventures on Rokugan will be as well as the main RPG, not instead of it.

What do you think? A good idea, or a risky one?

Asmodee doesn’t license Legend of the Five Rings, they own it, so in that respect, it might be a safer title to experiment on than, say, the Star Wars RPG.

Speaking of licenses, Mutant: Year Zero and Conan have new owners. In this case, we’re talking about the game rights to Conan and other Robert E Howard titles, which includes Soloman Kane. PEG once published a Soloman Kane RPG.

The new owner is Funcom, who have bought Cabinet Entertainment.

I don’t imagine this will change much for the RPGs. It’s just a guess, but I suspect the tabletop games’ rights had been renewed or not dates already established.

Still, one to watch, in the same way as new owners for Asmodee might be one to watch. All it takes is for some big publisher to hatch their own tabletop plans, and these ripples become tremors.

I have my own license ethical dilemma. If you’ve thoughts on this, drop me an email, as I’m keen for input. Or leave a comment on the blog transcript, link in the show notes.

One of the RPGs reviewed on Geek Native this week is a Pay-What-You-Want called This Is The Way.

This Is The Way is a two-page The Mandalorian RPG, and I’m sure the publisher doesn’t have any Star Wars rights. So, should I be looking at the RPG? Should I support an indie creator? Should I respect the IP of even big powerhouses to the extent where I won’t even acknowledge games like this?

It’s easier when I’m sure the publisher has permission. That’s a strong connection to other big news this week. Free League Publishing will release an official Blade Runner RPG.

I trust Free League to do a great job. They have my money, but they’re not the only ones likely to get my wallet to open. I’ve a few previews to call out this week as I think they might be of interest.

To my shame, I hadn’t heard of Arthur Rackham before, but he’s a pretty big deal in fantasy. Not only does Geek Native have a preview of the setting, but there’s also a guest article to introduce the illustrator that goes with it.

Another strong temptation is Inferno.

Written by Martin Lloyd, the designer of Amazing Tales, Inferno is a card-based steampunk game of secret societies and magic.

Then, and these are in no order, there’s EIDOL which will hit Kickstarter soon.

EIDOL is a weird-fantasy 5e setting in which the whole planet is a dungeon. It comes with a new rule set called Delve, which creates megadungeons without the usual faff.

On Itch, you can find a free to download quickstart of a game called Children of Midnight.

In this setting, witches are real, gone public, led us to a world of harmony of wonder and then lost that in the Witch Wars. Now they’ve been replaced by a ruling authority known as The Radiance that hates them.

I’d call this a Jeeves and Wooster inspired RPG, and The Wanderer’s Tome, the publishers, will launch it on Kickstarter in the next few days.

On Geek Native, you’ll be able to find a generous preview.

I also want to mention Kalymba. I will have pronounced that wrong.

The RPG is on my radar for two reasons. Kalymba is a Brazilian RPG based on African folklore. So it’s clearly not just another Euro-centric fantasy. Also, I’ve only heard praise for the original. There’s no date yet, but a crowdfunding campaign is being worked on to translate it from Brazilian Portuguese to English.

Also, this week, there are many bundles to tempt you with and not all from the usual suspects.

There’s Killer Bundle 19 from Fandom’s Fanatical. This is their big one of the year, and if you’re into computer games, it’s the one for you.

Next up, a niche charity bundle from IDW to support The Hero Initiative of Shadowman comics. It’s being hosted at Groupees, which lets you build your own bundle, rather than the take it or leave it the approach of the others.

Goodman Games is at the Bundle of Holding with Mutant Crawl Classics. That deal holds the core rules at the entry-level tier, so it is worth a look at if you’ve been stalking the game without pouncing.

Lastly, Satine Phoenix’s The Red Opera has been included in Humble Bundle’s Tomes of Lost Magic. Most of the RPGs in there are from Frog God Games, and I know that that will rule it out for some of you, but I’ll mention that a physical book is included at the top tier. That’s pretty rare.

One last thing before we go, the first-ever Tabletop Gaming Magazine awards just gave the Best RPG of 2021 to Modiphius’ Dune: Adventures in the Imperium while Free League’s Alien: Colonial Marines won the Best Way to Die in an RPG award.

On that note, let’s wrap there. Keep safe, beware of temptation, beware of aliens, and we’ll see you next week. 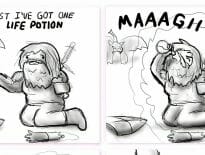 Comics Get a life… wait, it works like that? 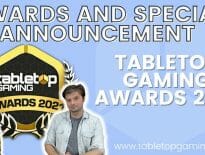