This is Audio EXP for the 16th of November 2019, and the title of this episode is ‘Murderous aliens invade D&D and the Genre Police’.

[The following is a transcript of Audio EXP: #18]

What’s killed you the most? Oh, I don’t mean which type of monster is responsible for most of your character deaths, I mean which genre is.

Perhaps you’ve only played fantasy games, and therefore the fantasy genre is responsible for 100% of your deaths. But, if you’ve experienced more than one genre as a gamer, which do you find the most dangerous?

That’s a question I put to Geek Native readers after disqualifying the horror genre because it is in a league of its own. There were seven genres to pick from in the poll, which I’ve reopened on the site, and so there are two things you can do. You can go answer the poll after this podcast, or you can try and guess the answer most people are giving.

Yep, that’s right. I’ll tell you the current leader at the end of this highlights show. First, though, let’s get on with the news.

This week I reviewed Blades & Blasters by Seth Tomlinson. It’s a genre-mashup of a Fifth Edition sourcebook.

Is that something you’ve ever thought about?

I must admit; I have. I’ve even tried it… but when I did it, I was playing on an internet forum, in a play by post set up, without much need for rules. The game was short-lived, as is often the case, but the silver gods falling from the sky certainly made for a memorable scenario. The aliens, those silver gods, had strange weapons, but we had magic.

I would not have even attempted the game if we had had to agree on balanced Fifth Edition rules beforehand. That feels overwhelmingly complex to me.

However, that’s exactly what Blades & Blasters seems to have done. This book adds aliens and their technology and does not seem to mess up the mechanics.

The trick seems to be with batteries. That feels true for real-life technology too. In the case of Blades & Blasters, there are rules for power cells. Simply put; the better and more dangerous the technology, the better the power cell needs to be, the rarer it becomes and the harder it is to recharge.

Blades & Blasters also contains a fully designed and very dangerous alien empire. The rulers of which have used their psionic powers to conquer all the planets they’ve found so far and either completely destroy their rivals or co-opt them into their growing armies.

While I liked Blades & Blasters, I think you should think twice and then one more time before adding it to your current D&D game. It’s a development that’ll change your world forever and not every player will appreciate it.

Aliens don’t fit the established but often unspoken rules of the fantasy genre.

This week I also reviewed my copy of Free League Publishing’s Alien RPG.

I experimented and did it differently. The problem I made for myself was that I had already reviewed the cinematic preview rules given out early to people who pre-ordered. While the full set of rules add in the important campaign mode, they don’t change the mechanics of the game, or the atmosphere or production values.

So, I did a video review.

In other words, I flipped through the quality pages on video with a heads-down camera rig and dubbed on an audio track.

If you’re familiar with Free League, the people who gave us Tales from the Loop, Mutant Year Zero and Forbidden Lands to name but a few, you won’t be surprised to discover that the Aliens RPG is just as good.

This book focuses on the Fallen. They are an alien race who once worshipped the Traveller and who were abandoned by it.

The once-proud aliens have fallen into the role of galactic pirates and raiders, hence the name, and are now the enemy of humanity.

It makes you wonder about the Traveller, doesn’t it?

Destiny 2 looks like it might also be the only thing that works for Google’s Stadia when the streaming service launches this month. I’ve pre-ordered that too, and so it’s entirely possible you’ll be hearing about my experiments with Stadia here on Audio EXP in the future.

If you feel like experimenting with traditional tabletop RPGs when it comes to genres, then there’s a popular column on Geek Native that you might want to know about. It’s called Genre Police.

Written by Ben Jackson-Ellery, Genre Police takes one genre at a time and studies it with running games in mind. It’s been going for two years, with two articles a month and so we’re fast approaching article number 50.

Genre Police #48 has just been posted on Geek Native and it’s a look at B-Movies. Are B-Movies even a genre? Well, Ben sets out his logic and dips into the history of them.

It seems obvious now, but I hadn’t considered the origins of B-Movies. They were initially a whole free movie that came with your cinema ticket. They were a freebie and so could explore into other genres; like fantasy, sci-fi or superheroes, that mainstream movies at the time wouldn’t touch.

So, in terms of adding B-Movie elements into your RPG one of the many tips Ben gives is called “Triumph of the Working Man” and it reminds us that form of the movie was for working-class cinema. Everyday people are the heroes and so in your RPG make sure that ordinary people the characters meet are useful. Equally, perhaps big organisations are less than helpful or even ill-equipped to deal with the unfolding drama.

The previous Genre Police, number 47 was all about conspiracy theories. Ben suggests RPGs like GURPS Illuminati, Over the Edge and Delta Green, are games to try if you want to go deep into that genre.

At this point, let’s take a break from talking about aliens and genres. Let’s talk about the RPG Publisher Spotlight. The studio Geek Native’s Patron supporters picked for this month is Dias Ex Machina Games.

Thanks to Patrons, this month’s Spotlight has a dramatic story about the origins of the Open Gaming License for D&D 5e.

Chris Dias, the creator behind Dias Ex Machina, wrote a roleplaying game called Amethyst that used Dungeons & Dragons 3.5 license. It’s a game set in our world except where creatures like orcs, fairies and elves have emerged.

Amethyst did well. When D&D 4e came out, Dias updated the game for those rules and used the Game System License that Wizards of the Coast operated for that version of D&D.

As you may know, D&D 4 was not as successful at D&D 5. Chris Dias ended up writing an open letter to plead to Wizards of the Coast that everyone would benefit if the parent company only offered better support for little indie studios like Dias Ex Machina Games.

Then, years later, when D&D 5e was launched, Chris Dias was quick to launch a Kickstarter for Amethyst 5e.

What’s the problem with that? Well, at the time, there was no Fifth Edition Open Gaming License. There was no official way for him to publish Amethyst, using 5e rules without getting into a legal fight with Wizards of the Coast.

The latter was true. A senior person in the D&D team had told Chris that the OGL for 5e was coming.

You can imagine all the pressure Chris Dias came under to spill the beans and reveal what he knew about D&D. In the end, he did just that. Off the record, he told someone who runs a significant RPG news site.

The way Chris sees it, that confidence was betrayed as a few days later the same news site exposed the secret news about Wizards of the Coast’s plans for 5e OGL.

What a story. It was years until Wizards of the Coast officially finished rolling out the OGL and working with OneBookShelf to set up the DM’s Guild.

Right now, Dias Ex Machina Games are working on a marathon Kickstarter project. One of those deliveries that go on and on and its for Ultramodern5. The Ultramodern series is very popular over at DriveThruRPG, and it’s no wonder he’s working as hard as he can on it.

As usual, if you’ve time, please do check out the monthly RPG Publisher Spotlight winner. These indie studios don’t tend to get any press coverage when they release new games, not in the way the bigger publishers do.

Having said that, it’s not always plain sailing for the large studios either. This week Privateer Press’s founder had to explain why some customers had faced delays in getting their products.

The problem is two-fold. Firstly, Privateer Press moved workshops, and this meant they were offline for a while, not able to make any of their products. They’re still catching up.

Secondly, the whole system of game studios shipping to middle-men distributors who have to try and estimate demand from shops and then sell to shops seems to be under stress. There’s just so much new gaming goodies each and every month these days.

At the same time, shops are suffering from people buying straight from publishers.

2020, of course, is just a few weeks away. Further down the line, and we’re talking 2022, or later, there will be a new Warhammer coming.

This is a game that’ll be set in the old Warhammer World before the Age of Sigmar and before the Champion of Chaos destroyed everything.

It’s nostalgia, but also, I hope, a move to meet genuine demand from Warhammer players.

There’s just one more bit of breaking news that I want to add into this summary before we go back to dangerous genres. Late last night, or early Saturday morning, Wizards of the Coast had to email some customers about a potential cybersecurity risk. An old legacy database had been exposed to the public.

Some Arena and Magic Online accounts are known to be affected. However, Wizards’ email also mentions DCI, and if you used the old D&D character software, then you may have had a DCI account.

It’s embarrassing for Wizards of the Coast, but they seem to be moving quickly and taking no risks. Wizards have also been supporting the Extra Life charity and this week published Infernal Machine Rebuild, a 100+ page adventure of which 70% of proceeds will be donated to Extra Life.

And the most dangerous genre? That’s sci-fi. At the time of recording, 1 in every 2 votes has gone to naming sci-fi as the most likely type of game where your characters can run into real and deadly danger.

What do you think? Does that make sense to you?

Well, that’s a wrap for now. Thanks for listening and we’ll catch up next week. 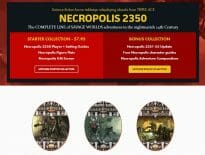 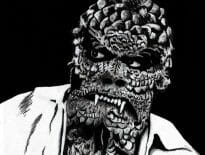 Tabletop & RPGs Genre Police: It Came From The Cinema Screen!
wpDiscuzComment Author Info
Manage Cookie Consent
This site uses cookies 🍪, and links are ads that may earn bloggers some money 💰, and with this alert, I very much hope that these dark truths 🧌 are acknowledged.
Manage options Manage services Manage vendors Read more about these purposes
Preferences
{title} {title} {title}
Loading Comments...