This is Audio EXP for the 16th of July 2022, and the title of this episode is “Gen Con in Court, Roll20 take the reigns of DriveThruRPG “.

[The following is a transcript of Audio EXP: #156]

I’m still trying to get in touch with Long Shadows, even tweeting in public, but it is a holiday season, and I never expect any response.

We don’t need a publisher to talk with to spotlight them, although I think it’s better.

The very first Spotlight was on Rite Publishing, and I tried to reach out to Steven Russell. I didn’t know it then, but he had died in a car crash years earlier. The company was still running, with his wife checking in now and then.

Awkward. However, I still wrote the feature and got a pleasing response from Miranda Russell months later.

That’s one embarrassing story, and here’s another. This podcast is Audio EXP 157. I number them on the blog, not in the audio intro and last week, and I wrote 155 when I should have written 156. What can I say? I’m very error-prone and was in a rush. I’m more relaxed today, although dinner did feature a vegan ale decorated with an Old One-esq squid design. Just the one.

The real challenge today is my new Microsoft L5V keyboard which is about half the size of my old one. My muscle memory is out by a magnitude, and I’m making even more errors than usual. This podcast, with a familiar microphone, and no keyword, is a welcome escape.

So, let’s move on from awkward stories and start with some good news and then on to some big news.

What’s been the most significant news since then? D&D 5e? Since then? What about the don’t call it a merger with Roll20 and OneBookShelf? That means DriveThruRPG and DMsGuild, plus others.

Legally, it’s not a merger. It’s a joint venture, but Steve Wieck is stepping into a new role and, I suspect, will be less hands-on than before. He deserves it. Roll20 boss Ankit Lal is the new big boss. Ankit will be holding the reigns.

What does this mean in the short term? PDF support in Roll20. It means DTRPG publishers will have a new contract to sign for now, with very few changes.

Audio EXP podcast listeners will be familiar with this as the distance between digital marketplaces, and virtual tabletops is limited.

Wizards bought D&D Beyond and may be working on a VTT of their own, perhaps for D&D 6e.

Foundry challenged the market by dumping subscription fees. Fandom, which sold D&D Beyond, still has Cortex, Fanatical and the promise to launch a creators market.

That’s just the tip of the iceberg too. However, as we might see with Marvel movies, people go off the boil. Can the surge of RPG interest persist? Perhaps. The D&D movie and TV shows are coming, and Lord of the Rings is speeding towards Amazon Prime. Tabletop games reinvent themselves often.

Speaking of which, Steamforged Games have brushed themselves off after a bruising Dark Souls TTRPG release, run a few more Kickstarters and have now bought Rivet Wars from CMON. The dark humour steampunk battle game has been out of print for a while, and SFG’s co-founder Mat Hart promises a new direction for Rivet Wars. Progress.

However, sadly, for every step of progress, there’s backwards pressure, too; Gen Con is likely to be back in Court.

What happened? A Washington Court of Appeals found that Zak S had enough evidence to push forwards with a claim that Gen Con hurt his reputation.

The convention had banned him after allegations were made and said why. I think they did so because they wanted people to feel safe.

I understand the argument on both sides. Zak, an RPG designer who had credits as a consultant on D&D before Wizards of the Coast stripped him of them, surely did suffer from more people discovering the allegations about him.

On the other hand, Gen Con was looking after people.

Sorry, I don’t think he’ll back down and, if he has the money, will take the tabletop gaming convention to Court. Gen Con is important for the tabletop hobby community, so we’ll all feel it one way or another.

Right, enough of that bleakness, and let’s wrestle back towards something more wholesome.

What about Back Again from the Broken Land?

It wasn’t a playtest review, but on the blog, I looked at this Tolkien-inspired RPG from Cloven Pine Games. It’s more cooking than combat.

In the game, you play a halfling-sort-of-small person who, having been caught up by accident in a war against a dark lord, a doom lord, must now walk home with friends.

Easy? Not so much as the doom lord’s hunters are annoyed and after you. You’ve no hope of winning a fight against them, so you must run and hide if one gets close.

Most of the time, it’s about talking through the trauma you faced together and your burdens. Healing activities like sharing a meal together are a chance to unburden yourself, to lighten the load, and that’s the count that determines the ending of the one-shot.

It’s not in my nature to be wholesome, especially if pursued by hunters for very long, so let me tell you about HeXXen 1733. This is a German RPG in which demons burst out of the Black Forest during The Thirty Years’ War, making a bad situation in Europe even worse.

In this game, players are hunters, not the hunted, and go after the demons, werewolves and other horrors.

Ulisses Spiele is making noises that might give fans the hope that an English translation is coming. Or they might be testing the water. Either way, it’s still an excellent RPG idea to know about.

A book we know is coming, but in minimal numbers and likely to sell out, is the collectors’ edition of the signed The Art of Love, Death + Robots. Both David Fincher and Tim Miller have signed the 300 copies being sold. At the time of recording, you could still pre-order through the links in the blog, but I’m not sure whether that’ll be possible for much longer. As ever, links are found via the show notes.

A bit of crystal ball retail forecasting there, I know. Another is about what Hasbro is up to. Hidden in a press release and getting almost no media pick up, Hasbro will debut a first-of-a-kind D&D toy range as SDCC this year. It’ll be D&D movie related. I have got a link in the transcript.

I bet we’ll get action models of the characters from the movie. Let me know if you’ve better theories in the blog comments.

I hope the D&D movie is… you know… good.

I also hope the new Bleach anime series is good. The original was a key part of my old life. New me will make room for a new and good Bleach.

If you don’t know the anime, it’s about a guy who can see ghosts and gets caught up in the war of the death gods. Death gods are to ensure that people don’t stay as ghosts, and if they do, they’ll corrupt and start attacking people.

However, power leads to all sorts of fights, and there are lots of other supernatural factions out there. There’s loads of magical sword fighting.

The first trailer is out.

Before we move on to this week’s healthy collection of freebies and bundles, I want to take you out of this world. Not into the supernatural world of Bleach but the outer space of this world.

The MARS Project One is a watch that tells the time for Earth and Mars at once.

Okay, the Mars time is a bit wrong for usability, but the interface does away with the usual clock design in favour of industrial-looking globes and tumblers. If you can pop over to the blog to watch the demo video, I suspect it’ll be worth it.

Right, on to those bundles, and you might need to buckle up for these.

In the Bundle of Holding there are over 6,000 pages of OSR temptation from Castle Oldskull.

There’s also a generous Shadowrun RPG offer from Catalyst. I think you can buy the top tier, which comes with the core rules, for less than the price of the core rules.

That’s not all; Humble also has a significant Judge Dredd comic book deal. You don’t hear Judge Dredd fans demanding that awkward politics are kept out of the stories, do you?

Better than a cheap bundle is entirely free. We have got a few of those this week too, and one is from Wizards of the Coast via D&D Beyond. Spelljammer Academy is free for account holders, for your library, and all to get you in the space-opera mood.

Lastly, there’s a gift from me to you too. Perhaps. Geek Native Patreons have a free Fading Embers book and Grim & Perilous discount. I hope you enjoy it!

Before we sign off, I’m at a sci-fi con next week. The worst-case scenario is the podcast will be a day or so late. And, on that bombshell, let’s wrap, and we’ll speak later. Ish. 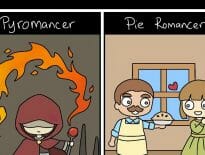 Comics The wordplay is mightier than the swordplay: Know … 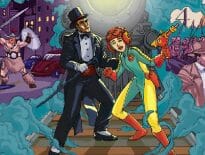