This Article is part of a series about the dials. Find the first dials article here.

The heart of most RPG is a collaborative effort dictated by a conversation. The programming loop of most games is ‘player dictates own narrative, makes check, GM describes narrative until they are prepared to give it up, then they hand narrative back to players’, and it can seem jarring to deviate from that.

In that framework, there’s a lot of wiggle room. Who dictates which parts of that descriptive? And what happens when we change that power structure? Can we let players control outcomes? Why would we want to? Let’s look why we surrender control and some idea of a system you can borrow to use in your games to do it well.

Can I tell you a secret? Sometimes, I don’t plan a session. I just have an idea where the end might be. I just let the players dictate the content. I might have some ideas about where the plot might go, but they are as legitimate as whatever might really happen.

I don’t say this to endorse laziness or to big up my improv skills – I just want to outline how easy it is to just take a step back and allow someone to take over for a bit. How easy it to surrender control.

Sometimes this means by the end of the sessions one of the players has betrayed the rest and has been left to die in a space station full of ghosts or something, so we have to be prepared for some serious road bumps.

Why would I do this? Well, to begin with, this is the very least of concessions to player agency – it’s not exactly a new idea (a LOT of D&D memes are about a DM losing control of a session, often on purpose). If you aren’t occasionally letting players just go in the direction they want to, you may as well be writing a novel.

But also, it’s about building a story together and valuing the input of others. Other people generate ideas you might never have had, and if you place genuine worth in those ideas, they can shape a narrative in entirely new ways.

Embracing ideas the players have and getting excited about them is one of the key touchstones of really good game master practice, regardless of system. So, where and how can we begin to surrender control, particularly if we aren’t used to it?

Level 1 – Character: Early work to establish this level of collaboration is really easy. When a player comes up with rare and cool character ideas, rather than try and alter the idea to fit your world, alter the world to fit the character. When you do something crazy like make their warforged a composite of different personalities collected from fey energy, consider making that true for all warforged. If they want to come from an alien race not already Star Wars canon, just invent a planet.

Level 2 – Setting Details: It’s important to recognise when you are falling into lazy or repetitive behaviours. If something comes up during play and you can feel like you are about to introduce something that sounds a lot like what you’ve already done, asking a player to invent it instead can be quite cool.

The night before I wrote this article, I was about to describe a generic restaurant/tavern to the group and I stopped myself and said to the player ‘where would you take the group to eat’ and now we have a haute cuisine style eatery in the setting that serves diminutive Whifflebeast ribs as an entrée.

This because I relaxed, let the player have options and let them debate the menu. A simple thing but it can be applied across the board. ‘You’ve been to this city before, describe an NPC for me’, and soon you’ll be at ‘what threats are in this land?’ and having them describing obstacles they can come across.

Level 3 – Consequences: So, maybe the first big step is allowing players to dictate consequences. You have to build up to this and allow them to ease into things. Start by giving players choices during the aftermath of a bad roll or choice like ‘Look, you are being swept downriver, smashing into rocks.

You’ve got a choice. Either you can take most of the damage on your body, and I’ll roll extra damage, or you can take minimal damage but lose a random item in the rushing water’. This is a small empowerment that gets players accustomed to designing their own fail states.

Then you can build to ‘You just failed to convince the guard to let you past. What does that look like?’ and a player describes how they bungle it and dictate an NPC’s reaction. In World Wide Wrestling, the player with narrative control describes the actions of both combatants in an exchange, even if that other is being played by someone else.

It means you can describe your own success – or defeat. Whatever works for the narrative and the dice tell you.

Level 4 – Complete narrative control: Some games have a mechanics installed which enable you to grab hold of the narrative.

In the game Masks, players can earn a moment where they take the GM roll for a minute or so and describe a specific event that can resolve a crisis. It’s often used for a standout character moment that moves the plot forward.

When I started running the game, I was wary of it, but it turns out most players are invested in making sure the narrative stays on track and are more interested in telling a cool story. Consider allowing players in whatever game you are playing to exhaust a resource (like, say inspiration) to just take narrative control and decide an outcome. Most of them won’t use it to kill the drama.

These changes to narrative dial don’t have to be all the time – I know for example, that when I run combat, I am trying to engineer a freight train of consequences and drama, and tend to launch into it full flow and get caught up in the description. And that’s fine, it’s where I feel comfortable not falling into ruts and gives a sense that players are fighting for a chance to dictate their fate and chances are limited by contrast to the very open-world design of other moments.

So, we’ve looked a little at how and why we surrender control. How it can make our game look better and a 4 level process you can try to implement and stop when you don’t feel comfortable. Next time, we are going to look at what happens when you tighten control and why you might decide to do so. 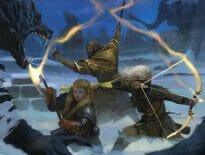 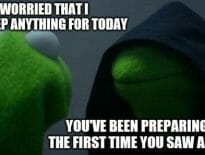