Valiant Fox Gaming’s Fading Embers Setting Primer is now a Pay-What-You-Want with a recommended price of $0.00.

The Primer was previously a $10 product and existed as an introduction to the icy Fading Embers setting that uses D&D 5e rules.

The change in the status of the Primer means only one thing; the full Fading Embers Campaign Set Kickstarter is coming.

The world is dying in snow and ice. Fire magic is terribly rare. It was a midsummer day when winter ambushed the world. Lakes turned to ice, and even the sun grew more distant. Crops failed, and wars over resources erupted. Temples were overrun by the hungry, but the gods were silent.

You can read more about the Fading Ember Campaign over at the Valiant Fox Gaming site, which confirms the Kickstarter as running from October 1st to November 1st and you can check out a little more of the artwork below.

The cover for the new book is shown above.

The Fading Embers Primer was a Result of a Kickstarter itself. As a result, I wouldn’t expect the Primer to say Pay-What-You-Want forever, not necessarily.

The problem John Yackel of Valiant Fox Gaming had to address was “Why would anyone back a Kickstarter to bring this gaming world to life when they know nothing about it?”. Kickstarter is a hugely competitive arena and Geek Native tracks as many failed campaigns as successful ones.

John’s approach was to Kickstarter the proof of concept first, or, at least to bring to life enough of the world of Nyth to show people that Fading Embers was worth backing.

I doubt Valiant Fox Gaming could have predicted that they would be launching their frozen D&D setting while the Rime of the Frostmaiden was still hot off the press.

However, if you’re a DM and want a more harsh version of Icewind Dale or even help on what to do if the characters don’t rescue Ten Towns then there will likely be plenty of help in Fading Embers.

"The same thing we do every night, Pinky - try to take over the world!"
Art 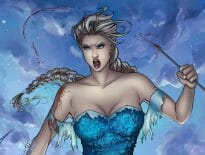