With the Halloween season coming round once again, my mind returns to the subject of horror. I have written a lot about horror before, both generally and in reference to the splatterpunk and cosmic horror sub-genres so I don’t want to retread those boards.

I instead want to look at a specific tradition of horror, one that dates back to the earliest stories, but has along the way mutated into a series of sub-genres.

We’re going to look at horror that purports to be real documentation and along the way, we’re going to steal some ideas. So, follow me into a jagged history of blending the lines between reality and fiction.

More Ancient Than You Know

For most of us, if asked to you name the first piece of horror that purported itself as reality to its audience a large number of answers would likely be The Blair Witch Project or maybe, if you knew your horror, Cannibal Holocaust.

I think that’s because it is easy to forget that Dracula presents itself as a series of diary entries and doctor’s reports. In horror writing, the trope has existed for some time. The idea of the text being the only surviving artifact from a moment of horror continues down through Lovecraft and his contemporaries.

At The Table: Having physical copies of things is a really good way to hook a group into investing in the feel of a game, you’ll notice that a lot of Call Of Cthulhu books and box sets have things players can handle. This briefly puts the players in physically contact with the world of the game, anchoring them in the reality of the setting so that they forget not to be scared. This is an easily replicable technique for any GM with access to decent formatting software.

Maybe you can go beyond as well. Maybe something is hidden in the back of a photograph? Maybe something in the document is a hidden clue? Maybe if the players turn the box over, something horrible is hidden on the bottom? The possibility of delivering an eerie moment or shock in the real world is too good to pass up and will create a sense of dread amongst the players if handled correctly.

The Found Footage genre is the persistent zombie of the horror genre: it never goes away and occasionally, it really bites. While it might seem old hat now, at a time, pretending that your film was a real-life piece of recording really kicked up a fuss.

The originator of the genre, Cannibal Holocaust, convinced so many people that the director had to literally bring his cast to a legal hearing to prove they were still alive. The Blair Witch Project terrified people before they had set foot in the cinema. Through reasons of budget or storytelling, the genre often leaves antagonists as lingering mysteries even when the final piece of footage has rolled.

This unknown element and the feeling authenticity of in the shooting style often creates a feeling of unfinished business in the mind of the audience, leaving them with an itch they can’t scratch.

In a Prep: There’s a couple of things we can do with the found footage genre. The first is to learn from its techniques of obfuscation. While it was mostly budget on the part of found footage creators, the lack of monstrous reveal is an interesting avenue to push down.

What happens when you create an adventure where odd things are happening – not all horrible, some just weird and off-putting – and while the problem resolves itself, the players literally never find out why it happened? It can feel frustrating but played well, it can terrify players for years after the act. A good way to do this is to have the weirdness happen during another adventure and be coincidental to the plot.

That way the players feel like they dealt with whatever was going on with the say, slavery ring, but still have no idea what that horrid thing in the swamp was and why it made odd dragging noises.

At The Table: Let’s return to the idea of props again for a minute. It is possible for a GM to have footage prepared on a laptop or Youtube channel that the players can wander across. Recorded cult rituals, the private tapes of a serial killer or, if you have the budget, some half-glimpsed footage of some abomination. Having these as real, playable elements in a game can really create memorable moments for a player group if you have the skill set.

Obviously, eventually, everything finds its way onto the internet. While we’re clear that it probably evolved from ‘Copypasta’ chain e-mails, the user-generated, continually cut and pasted horror of the Creepypasta genre has no real clear ‘first story’ – although there are a few potential candidates. Arriving as a series of largely text-based tales of terror presented as true, the power of Creepypasta in its early days was that it was largely unprovably true or false and that gave the works a sense of ambiguity, lead to a feeling of telling tales around a campfire.

As the idea began to move platform and format, you could also stumble across them while doing something else, from message boards to Youtube videos to seemingly innocuous blogs. Eventually, sites that catalogued Creepypasta began to appear and log each of the stories. Slowly interconnected mythologies began to arise: The Fears Mythos and The SCP foundation are both now heavily documented labyrinths of canon. While this created some interesting shared universes that are fascinating from an academic storytelling perspective, this has led to many of the antagonists becoming less scary.

It’s the same reason why the fourteenth Friday The 13th film isn’t as scary as the first – we know too much, have seen too much. In many ways, the isolated bursts of stories were scarier to begin with.

In Prep: There’s a great value in just stumbling across horror, throwing it headlong into a game that usually doesn’t do it. That’s why Ravenloft works so well when smashed into Dungeons and Dragons – it’s arresting and upsets the power balance often associated with the game.

It’s worth occasionally looking at the assumptions that the mechanics or unspoken rules that the game you are running makes and very abruptly challenging them. Just watch what happens the first time you tell a D&D group that cure wounds doesn’t work on an injury or the first time someone used to being able to fight their way out of most RPG situations takes a gunshot wound in Unknown Armies.

Those are challenges to boundaries players have imagined existing. Watch which assumptions players make and then kick them out from under them.

At The Table: I think it’s worth mentioning that unless you are talking about explorations of personal horror like World of Darkness style play or a Cthulhu style degeneration, Horror can live out its welcome.

It can sometimes function best as a one-and-dones. Watch for when players are no longer threatened by the horror and back off the gas for several sessions and wait. Find a way for the thing to be threatening in a new way. Reinvent it altogether.

The reason Creepypasta worked at the time is because it felt new and unknown. Now, it is in danger of becoming as known as Nightmare On Elm Street.

Well, that ought to help your players not sleep at night. Next we are going to pitch back into another horror idea but investigate it from a totally different angle – Ever hear the one about the Babysitter and the guy upstairs?

Creative Commons credit: The Musings of a Slender Man by Josh Jenkings, Bloody Mary by Wrath7734 and Killer in the Backseat by Blade Fury.

I really don’t think horror works “so well” on Ravenloft. Actually, it doesn’t. Elves and dwarves versus vampires is not only funny, it’s also not really funny but ridiculous. Horror works only when normalcy is broken, when something out of the ordinary breaks into the ordinary. But D&D is not ordinary, it’s about epic humanoid heroes and wizards and people with all kind of power! Horror is not about having power, much less superpowers. It’s about being vulnerable and nauseated.

I think you have to work at it, but it is possible to deliver horror in a dnd setting. The adventure ‘Ravenloft’ is really what I was referring to, rather than the setting. In that, a lot is done to waste the heroes powers, work against them and make them feel powerless – it is an example of horror done well. I will agree as a setting it doesn’t always work that well. You’ll notice that the better Ravenloft adventures are pretty sparing with the more fantastical elements. But you make some interesting points. The best Ravenloft game would tap… Read more » 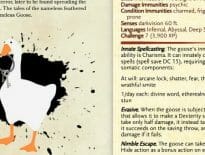 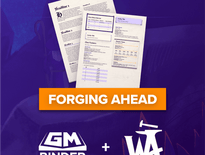