Over the next few columns we are going to be diving into Horror. While we’ve looked at topics that have bordered the genre before, we haven’t dived right into its black heart. The problem with horror is that it very quickly divides into a massive set of sub-genre specifics. Poe, Lovecraft, King, Bright, Barker are all tellers of very different tales. To begin with, I want to examine what those who write horror have as a common toolbox.

I guess…that’s a terrible term, isn’t it? For the purposes of this column we’re going to view this as ‘suspense horror’. I would use the term ‘Gothic Horror’ but I won’t for several reasons. Firstly, I want to avoid repeating myself from the ‘Gothpunk’ column. More importantly, while some of the tropes of the genre are the crumbling mansions and misty graveyards full of undead, it’s not helpful to reduce to these elements. That’s more about the set dressing than the script, We need first talk about how horror does what it does. It creates suspense.

Horror is about a building of pace towards a horrid revelation. Often things seem mundane at the beginning and move towards an unstoppable conclusion. In many ways, horror is a grim form of tragedy, with all the mythological elements that come along with that. The genre defines itself by creating a creeping sense of unease, then a series of revelations that tip the audience into the realisation of unending doom. That’s why we don’t mind so much if horror is predictable, part of the enjoyment comes from watching the tragic fate unfold. It’s our darkest mirror, our fairytale with the worst consequences. It could all have been avoided if they’d just….

The RPG world is brimming over with Horror RPG’s, although a lot have a linked together mythos or dwell very specifically in the gothpunk ‘monster as hero’ tropes. Here we off a few that do not. Those among you with RPG experience might notice I have missed a few obvious entries out. There’s reasons for that in coming columns. Stay tuned.

Dread: Perhaps one the most iconic game due inspirational use of a Jenga(TM) Tower to create a physical ‘Damocles sword’ over the players, dread is a game that can provide real terror if run properly. Giving the players a basic ‘succeed or die’ mechanic really raises the stakes too.

Chill: A game I developed a pathological fear of when I was younger (have you seen the second edition cover?) Chill has always presented itself as a breed above. And it has some really amazing design in it. Grab the second edition and run the adventure with that house. You know the one I mean. That will grab your players, every time.

Eclipse Phase: Take horror. Put it in space. A sense of unease leaks from this setting because you can wrongfoot players at any time, hacking their memory or perceptions. In a game where players can die multiple times, this setting still manages to find ways to keep the tension real.

One, Two, Freddy’s Coming For You….

If you want to add some horror to a game, here are few important things to consider:

Fragility
The best characters in horror have something to lose. They are fragile, lovable glass houses. Stephen King is a great horror author because he writes characters that you don’t want to suffer – then he makes them suffer. You can already see how they are going to break and you are ready to cry for them. In game, the way to do this is to make sure you know the psychology of the PC’s inside out, how to push them. Give out character questionnaires to your players to specifically find the parts you can pull apart.

Creeping Fear
One of the components of horror is that creeping sense of unease. To begin with just make a few things a bit off. Odd, unexpected smells. Slightly bizarre behaviours from NPCs. Observations that later turn out to be false. Slowly build the horror and add to the tension. If the players have encountered a threat before, place familiar signs in their way to build the tension but have it a little different so they can’t be sure. That growing sense of dread should cast a shadow over everything.

Puncturing the mood
When the tension gets too much to take, it’s time to shake up the mood. Shocks, loud noises and banging on the table are great ways to edit in a ‘jump scare’. These allow for a release of the feelings gathered at the table. Once it’s clear, you can begin to build the tension again. It’s a necessary release valve, so use it when you need to correct the pace of proceedings. You can always use comedy here, too. Once you have done this a few times, players won’t know which jump will be the last, making it a bigger shock when it comes.

Show, Don’t Tell
The ‘big horror reveal’ is a really difficult balancing act. Don’t explain too much of the origins of what the characters face. Leave ambiguity. Don’t name a creature – but do describe it. Take a moment to dive into the horrid details of whatever the players face. Add dripping appendages, dwell on the unworldliness. Make an unknowable horror that is too close for comfort.

The Downward Spiral
Once the horror has been revealed, ensure that every choice the characters make cuts off a possible exit strategy. Wittle down the choices, this adds to the rollercoaster of helplessness. Don’t cut off all the exits but give every choice a negative consequence. Make sure they often have to choose between two bad ideas. The idea is to make them feel that although they have options, each of those routes remove a little of their control over the situation until they have painted themselves into a corner.

Image credits: The Dunwich Horror by Marcelo A. Orsi Blanco and Necromancer by the talented Ksenia Svincova.

You can buy Ksenia Svinova (aka Iren Horrors) designs on Society6. 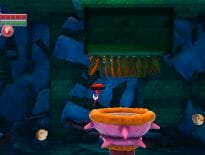 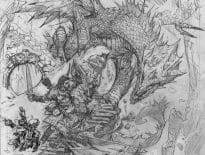