You are here: Home / Books / A review of The Bloody Red Baron 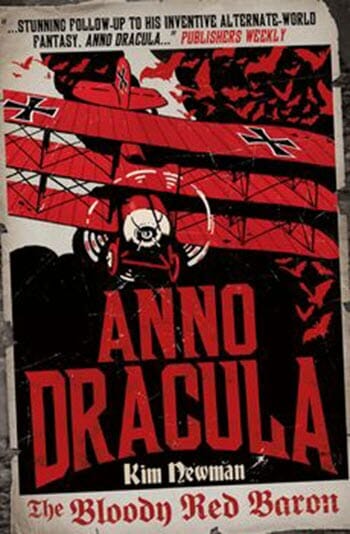 The Bloody Red Baron is the sequel to Kim Newman’s Anno Dracula. It is set in 1918 and Graf von Dracula has surfaced as the commander-in-chief of the combined military might of Germany and Austria-Hungary.

There are some familiar faces in The Bloody Red Baron. There is Charles Beauregard, from Anno Dracula, but this hero hasn’t succumb to the dark kiss and is therefore an aging member of the Diogenes Club.

The “man of action”, so to speak, is Charles’ protégé – one Edwin Winthrop, also in service to the Diogenes Club but who finds himself seconded on Condor Squadron for much of the book. Condor Squadron is an experienced collection of World War I fighter pilots. It’s a group that includes names like James Bigglesworth.

As much as Winthrop is the man in the front lines it might be more appropriate to describe the vampire reporter Kate Reed as the main protagonist. This is the same Kate Reed who makes an appearance or two in Anno. With that said; The Bloody Red Baron is a book that can be read without needing to know what happened in the book before. Knowledge from Anno Dracula simply gives you a different experience of The Bloody Red Baron.

Condor Squadron find themselves up against Jagdgeschwader 1. This is a group of German pilots led by Mannfred von Richthofen – better known today as the Red Baron.

Fighter pilots and vampires – this makes for an interesting mash-up, it sounds like a novel mix. Perhaps the mix was a little too left-field to begin with, I found it quite hard to get into The Bloody Red Baron. There was some scene setting including the appearance of some famous names (as now demanded by the genre).

I’m glad I stuck with The Bloody Red Baron because I thoroughly enjoyed it by the end. It was, without a doubt, the appearance of Kate Reed that turned it around for me. Kim Newman writes to give us an insight into the head of some of the characters but not all of them. Kate’s motivation and determination, I think, makes her the real hero.

The action jumps around in The Bloody Red Baron. We don’t just follow the allies in the war, we leap over to Germany and follow the “Flying Circus” of the pilots over there too. The story teller for the German half of the book is an interesting choice – it’s Edgar Allan Poe.

Poe is a strange choice as a narrator. His world view is very different to that of Kate Reed; in fact it may be the opposite. Poe’s a vampire but one with respect for human life, sort of, but whereas Kate Reed looks out at life Poe spends more time looking inwards. It’s the matchup of Poe and the Red Baron that goes a long way to pulling this key figure into the role of story teller for the readers.

The best of the book comes from those scenes in which things go wrong. It can be gruesome at times – but bloody encounters are appropriate for this title. World War I was an awful and barbaric time. Can you imagine how bad it would have been if most of the leaders were vampires who had either lost their humanity or had only tatters of it left? This is the backdrop to The Bloody Red Baron.

There’s a bonus at the back of the book. Genevieve, the vampire elder and darling of many fans, from Anno Dracula is missing from The Bloody Red Baron. The book, however, concludes with a sizable novella. “Vampire Romance” picks up in the 1920s and follows the politics and drama of putting a new vampire king on the throne. It’s a good look at the power-struggle between the Diogenes Club and the vampires that rule the mainstream politics in Britain – and, I suspect, a strong hint towards the next book; Dracula Cha Cha Cha.

Fans of Newman should scoop up The Bloody Red Baron. Fans of World War I fiction or vampire mash-ups (no sparkle vamps here) should also take a look. The rest of us should begin with Anno Dracula, which is stronger, and decide from that encounter whether we’re ready for fighter ace vampire action.

My copy of The Bloody Red Baron was provided by Titan Books.

A review of The Bloody Red Baron 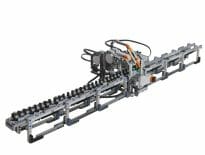