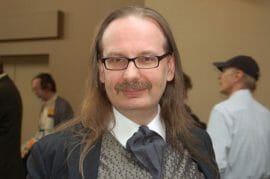 Author and horror maestro Kim Newman is the man responsible for the Anno Dracula series. The first novel – Anno Dracula – was published in 1992 and depicts an alternative history where Dracula arrives in England and survives. Vampires become mainstream and for some people that’s a problem. Johnny Alucard is the fourth in the series.

Kim Newman kindly agreed to do a Q&A session with Geek Native. This isn’t the first time; Kim also spoke to the blog back in 2011.

Johnny Alucard is the latest in the Anno Dracula series. If a Geek Native reader wanted to jump in with this book and read the others later would you recommend against it? If not; what one thing would you tell them to give them context for the series?

Kim: I’ve tried to make each book stand alone, though obviously you get more out of them if you read them in order. The earlier novels – Anno Dracula, The Bloody Red Baron, Dracula Cha Cha Cha – are all set in fairly limited times/places (London 1888,World War One, Rome 1959) but Johnny Alucard covers several decades and takes place all around the world. With the two novellas included in the Titan editions of Bloody Red Baron and Dracula Cha Cha Cha, the series as a whole now feels to me more like one big, expansive, all-over-the-map work on the model of Johnny Alucard. But all you need to know going in to Johnny Alucard is that Dracula was real and has had a big impact on the 20th Century. I admit that the deeper into a series you get, the harder it is to have individual books as standalones … from now on, I might have to do those ‘previously, on …’ montages.

What was the journey from the story “Who Dares Wins: Anno Dracula 1980” to the novel “Johnny Alucard” like? More than just a title change?

Kim: The journey actually starts with the piece published in Steve Jones’ The Mammoth Book of Dracula as ‘Coppola’s Dracula’ – which I wrote before Dracula Cha Cha Cha. I can’t even remember now if I intended that as the seed of a book – it’s slightly different in tone from the first two Anno Dracula books – though it pretty clearly sets up the character who is the spine of the new book. I wrote two other novellas on the assumption that what I would end up with was a collection of Anno Dracula stories, but then found myself doing fill-in bits (Who Dares Wins was one of those) which made me envision the book more as a novel. My Professor Moriarty: The Hound of the d’Urbervilles has a similar structure – a series of individual adventures, but an overall, attenuated focus on one relationship that turns it into a novel. This was often a pattern for books which first appeared as magazine series or serials – though I suspect it has been impressed on me by the way long-form television works these days, with standalone and arc episodes and the notion of a season box set as an entity. Think of Johnny Alucard as Anno Dracula Season 4.

You’ve had the domain name johnnyalucard.com from about 2001. Did you buy it with the Johnny Alucard character in mind? Does that mean you relate your digital identity with him?

Kim: That was about the time I was first thinking of the book so it was in my mind. My first choices were all used – because they were simple things that happened to be the names of companies. I looked at quorum.com and Leech.com, which relate to my novel The Quorum, but they were both taken (though I just checked and they aren’t now – too late). Actually, Johnny is probably the character of mine I least identify with … he’s so changeable in the book, which takes him through many metamorphoses, that his actual identity is hard to pin down. I don’t really have a separate digital identity – I’m on Twitter as @AnnoDracula, but that was simply because I joined Twitter at about the time Anno Dracula was reissued and it made sense to highlight it. At other times, I might just have used my own name.

I’m halfway through the book and enjoying it. A game I’ve started to play is to try and work out who might appear in the book – who’s going to get the Anno Dracula treatment – and I was only half predicting the Barbie Winters character. How do you work out who gets to feature? Do you wrestle with adding certain characters to your mythos for fear that the wrong choice will change the entire tone of the book?

Kim: Sometimes the guest characters or featured characters are inherent in the story from conception – usually, the historical ones like Baron von Richthofen or Francis Coppola. Then, I tend to cast around for borrowed or altered or parodied people who happen to fit where the plot takes me. Much of that is setting – London in 1968 or California in the ‘70s or wherever – and seeing who fits in or would seem to be part of the cultural landscape. Then I feel an obligation to incorporate versions of vampire-related characters somehow, twisting or shaping them to fit the Anno Dracula universe. Because I’ve needed many vampire characters over the years, I’ve plucked names almost at random from stories, books, films, TV episodes, cartoons, porn movies, whatever … some of these I can no longer remember what I was referring to. That’s a lot of Counts and Barons. I can’t off the top of my head remember a specific instance of rejecting a possible character for those reasons, but I’m sure I have done that. I have more often found myself hampered because I made a throwaway joke earlier that prevents me doing a more sustained riff in a more appropriate place – there’s a Kolchak gag in Anno Dracula which means that the character doesn’t show up in Johnny Alucard, where he might be more comfortable (especially since there’s a visit to Las Vegas).

“Johnny Alucard” features movies and showbiz. Was that a chance for you to tie up your knowledge from the horror movie scene with your writing? Any in-jokes that need to be revealed?

Kim: There’s a film set sequence in Dracula Cha Cha Cha,but showbiz has been part of the series – along with politics and crime – from the first. There’s a theatre scene in Anno Dracula, with Oscar Wilde. Obviously, this is the book where I most come to grips with the movies, as an industry and an art form as well as through the shadows cast by the stories the cinema tells and the way they are told. If The Bloody Red Baron is set in a historical and imaginary war, Johnny Alucard is set in ‘Hollywood’ (the idea, not just the place). Of course, I do know a lot about films and that seeps into the book. I don’t know if there are any real in-jokes, since I try to make the books accessible to everyone, but I suppose the sub-plot about Adam Simon counts. Adam is a real movie director (Carnosaur, The American Nightmare) who played himself in the first scene of Robert Altman’s inside Hollywood movie The Player – here, I used this imaginary version of him as a character in a small scene then realised he could serve a crucial function in the climax of the book. So, an in-joke namecheck for a friend of mine gets turned into a more significant bit. This is the first of the Anno Dracula books set recently enough to feature real people I’ve actually met or know quite well. No one has sent death threats yet.

Are there any plans for another book in the series? In theory, would the next book be set in the present day or would we skip to the near future?

Kim: There are plans, but they are vague. I had intended to do a war on terror novel set in the ‘90s and ‘00s but I don’t think we yet have the perspective on the period to do it justice. Also, it lacks the appeal as a setting which all the other times/places I’ve used have … I enjoyed imagining Anno Dracula versions of 1923 or 1968 or 1979 or even 1989, but it’s hard to see what there is to play with in addressing (say) 2001 or 2013 or where to set the book that would be different. I have considered doing a science fiction Anno Dracula, whether set in outer space (the other 2001) or a 1980s-style cyberpunk world – both approaches have some appeal, but also present problems. I’ve also thought of hopping back in time and doing a Western. For contrast, the next book will probably be a continuous, more focused narrative.

How well would the Anno Dracula vampires do in a gritty sci-fi world? Would the technology differences finally catch up with them and prove to be all sorts of problems or would the undead adapt again?

Kim: Even killing Dracula doesn’t get rid of him, and the things he represent seem to be inescapable. If there’s an optimistic strand in the series it’s that the characters who stand against him – regular people and vampires – can’t ever completely be crushed. Since the vampires in Anno Dracula have different characteristics, and vary in their morality and lethality, they should persist in any society.

Are their any vampire series that you would recommend to fans of Anno Dracula? Which authors do the genre justice in your opinion?

What should fans hope to see from the pen of Kim Newman in the future? What should we expect to see?

Kim: Next up is a novel called An English Ghost Story,which is just what it sounds like. I’ve also got another Anno Dracula to do eventually, a Phantom of the Opera-related thing called Angels of Music and a 1920s school story called Kentish Glory. I’ve other things brewing too. 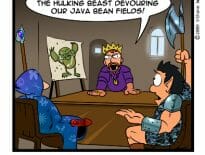 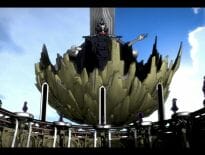