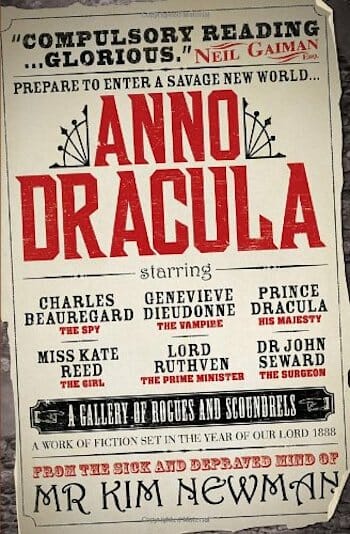 I first read Anno Dracula years ago. I can’t remember when; it feels like many life-times ago, it may have been back in the 15th century or perhaps around 1992 when the book first came out. Titan Books have brought Kim Newman’s head-of-its-time novel back and it is a clever decision.

Mashups are all the rage. There will be movies for Pride and Prejudice and Zombies and Abraham Lincoln: Vampire Hunter. Kim Newman’s Anno Dracula predates them all.

Imagine if Van Helsing had lost. Imagine if Dracula becomes King by marrying Queen Victoria. This is no spoiler… imagine is Doctor John Seward, who once had to look after Renfield in the asylum, is Jack the Ripper, armed with a silver scalpel and tracking vampires.

With Dracula as King of the British Empire and openly a vampire there is no longer any reason for vampires to hide. Dracula’s creations birth vampires of their own, who sire their own children and so forth. Soon it becomes fashionable to be a vampire. The vampire elite reserve the top jobs for themselves. Equally, soon the slums of London are all but bursting with vampire poor, trying to survive on a diet of pigs blood or perhaps pimping themselves out in exchange for a quick bite.

The dark Victorian London that Newman portrays is fantastic. Our hero is Charles Beuregard – a spy working for Queen and country. A game within Anno Dracula is to try and spot the famous names; historic or fictional, who make an appearance.

The fact that we know who Jack the Ripper is does not detract from the detective story aspect of the book. There are plenty of mysteries for the author to unravel as the plot thickens. It might not even be clear whether you’re supposed to be on John Seward’s side or not – if he’s killing vampires, is he a bad guy? Are all vampires evil?

There’s certainly the morality debate in Anno Dracula too. Do the ends justify the means? If you’re working with villains in order to stop something bad from happening… are you a villain too? Should you turn someone into a vampire in order to save their life? Make no mistake; morality debate is not code for “dull ethical questions”. Blink and these questions will zip past, carried in the tide of the fast moving plot.

Newman’s ability to create interesting and engaging characters – and to do it quickly – is impressive. There are plenty of characters in this book; Scottish detectives, warriors from the dark ages of Eastern Europe, politicians, doctors and even society butterflies. As each character feels unique, feels appropriate and has understandable motivations and reactions, there’s no confusion.

I might not remember exactly when I first read Anno Dracula but I do remember quotes from it. Given that we’re looking at about 15 years ago that illustrates just how memorable some of the scenes are. In almost every instance, the quotes from the book that I recall are short lines of dialog or responses to comments. For example, when our Scottish detective corrects an old Eastern European vampire, explaining he’s not English – the vampire immediately gets it. He’s lived through years of Eastern European countries warring against each other in the name of national identity. His reaction, in just a sentence, adds to his character, adds to the scene and is entirely memorable.

As it happens, there’s a chunky quote from Anno Dracula on the publisher’s blog http://titanbooks.com/blog/anno-dracula-excerpt/. It’s a chance to fair use some of it as an example to illustrate this review. The quote comes from Dr Seward’s phonograph diary.

Last night’s delivery was easier than the others. Much easier than last week’s. Perhaps, with practice and patience, everything becomes easier. If never easy. Never … easy.

I am sorry: it is difficult to maintain an orderly mind and this marvelous apparatus is unforgiving. I cannot ink over hasty words or tear loose a spoiled page. The cylinder revolves, the needle etches, and my ramblings are graven for all time in merciless wax. Marvelous apparatuses, like miracle cures, are beset with unpredictable side-effects. In the twentieth century, new means of setting down human thought may precipitate an avalanche of worthless digression. Brevis esse laboro, as Horace would have it. I know how to present a case history. This will be of interest to posterity. For now, I work in camera and secrete the cylinders with what remain of my earlier accounts. As the situation stands, my life and liberty would be endangered were these journals exposed to the public ear. One day, I should wish my motives and methods made known and clear.

I recommend Anno Dracula for vampire fiction fans, for historical mashup fans, for horror fans and it’ll certainly delight many readers of spy and crime stories. For the interested, there is an interview with author Kim Newman on Geek Native.