This is Audio EXP for the 21st of January 2022, and the title of this episode is “Banning your favourite game”

[The following is a transcript of Audio EXP: #132]

I’ve sent questions over to Tod at As If Productions; that’s the good news. The bad news is that, like always, a week to get in touch, a week to agree with the ground rules and send over questions takes us halfway into the month and not much time for answers to come back.

Still, you know the process. It’s great to feature a Q&A with Tod in the Spotlight, but we can push on regardless and do a follow-up and standalone post in the spirit of better late than never.

Tracking down interviews, writing reviews and watching out for geeky news is how I spend some of my time. I watch some Netflix, too, and JustWatch sent over their 2021 data for the US and UK.

What do you think are the top three movies across all the different streaming sites that the TV search engine tracks are?

In the US, in third place, it’s Wrath of Man with Jason Statham as an angry truck driver with a twist. Wrath of Man wasn’t in the top 10 in the UK.

In the second place, in the US, it was Zack Synder’s Justice League. You know the story there, DC’s angry superheroes or, for legal reasons, metahumans, coming together in a really long edit of the movie. I’ve not seen it yet. It was 10th in the UK.

So, in the first place in the US, it’s Nobody with Bob Odenkirk, Connie Nielsen and RZA about one angry dad.

In the UK, first and second place went to A Quiet Place Part II and Godzilla vs. Kong. I’ve at least seen Godzilla vs Kong. Of all the others, which should I watch, if any?

It’s good to have the choice, right?

Reports, which are next to impossible to verify, are that Chinese authorities are starting to regulate LARPs and mystery rooms.

It’s not because LARPS might be training for all sorts of covert activity, which might remind you of Hawkeye.

The authorities are worried many of these games feature the occult and the supernatural. The State isn’t keen on that, and they’re not keen on the idea of mystical Tibet or anything that might loop back to that sort of thing.

What if someone was pushing to ban your favourite game?

China’s regulation of games is hardcore and not surprising, and it’s also genuine. It comes to mind often when I get weird comments on the Geek Native blog from insecure people in the West who seem to think authorities will kick their door down and take their red box D&D away or make them play a lesbian in a Powered by the Apocalypse game.

That’s daft, of course, and the truth is there’s a whole range of games available. Later this year, a game from Japan is coming to English speaking markets, and it’s undoubtedly controversial.

That’s based on an anime that begins with some edgelord scenes of strong and graphic sexual violence. If you don’t know they’re coming, the scenes ambush you as the goblins ambush the rookie adventurers. Afterwards, the anime becomes much more traditional and calms down. It’s available on mainstream platforms like Crunchyroll.

I totally get why people don’t think an anime like that needs an RPG and why they don’t want the game in their home. I also doubt that the game will go anywhere near that level of shock value but may be proven wrong. It’s on pre-order at Amazon, which rates it 15+.

I think there’s a lot to unpack here. There’s one thing about representation and diversity and another thing about the violent content of games. They’re related, but not the same.

I suspect we’ll spend much of 2022 talking about it, as we should. I don’t want a return to the Comics Code, but I do want a better society. I think we get to a better society through action and leading by example.

There’s also cold hard cash on the table. Activision got its culture wrong; it didn’t do well enough with its corporate society. The game giant will now be bought for nearly $70bn by Mircosoft I wonder how much more that would have been without the public outcry.

I wonder if Microsoft could have bought Activision at all had it not been for how poorly the games publisher seems to have acted in some situations.

$70bn is enough to kick world hunger in the teeth, and it’s enough to make progress to Net Zero as well. It’s an amount of money that I struggle to get my head around.

Activision isn’t just Blizzard and Call of Duty; it’s as King and Candy Crush. This is a mobile play as much as it is an Xbox power-up. And while we can’t see the trees for the hype yet, it will also be a metaverse play.

I don’t think Goblin Slayer will affect Yen Press’ finances, although a company like that can’t afford a flop. I do think the integration of Activision and Microsoft will be felt in share prices and pension funds.

Of course, not all games cost money. The community of fans around Hero Games’ Champions tabletop RPG have put together several generous products in a single free download called Champions Begins.

The only bad thing I have to say about Champions Begins is that it’s another contender, in a small menu of options, of where you should begin downloading or buying content to get you started playing Champions.

There are decades of books for the superhero RPG now.

The point of Champions Begins is to get people started. The several books in the download are designed to onboard people into the game and if you’re even slightly curious about the Hero System, then it’s worth checking out.

It’s another example of a game not being banned. Hero Games didn’t say “No, don’t do this”; they said, “Thank you, let’s help publish it”.

There’s more. Another example of games getting made, not banned, is Demonworld. I think Ral Partha Europe has the rights, but FASA was pushing the third edition of Demonworld.

Now FASA has announced a fourth edition of the fantasy wargame. I think that means the proposed RPG of Demonworld has been lapped, but perhaps the momentum will carry both projects forward. It’s also interesting to see that Ral Partha seems quite happy to backseat themselves and let FASA lead the charge.

As long as someone is shepherding the game, right?

Nightfall Games are shepherding the StokerVerse RPG. We’ve seen a cover for the game, which was shown first by the StokerVerse authors and then later clarified as the quickstart by Nightfall.

It means we’ll get this digital edition of the quickstart on DriveThruRPG next month, probably costing a few dollars and that there will likely be a Kickstarter later for the whole tabletop RPG.

I can’t say I’m doing amazingly well in reigning back my Kickstarter spending. I backed a skull.

It’s a pirate skull dice tower that comes with a wooden bowl but not the costume, I think, that features on the video pitch that makes it look so cool.

I don’t even have somewhere to put it, but I do aspire to a corner table, and despite it being a dice tower, that’s where I have in mind for it. So, yeah, a future skull, for a future table, in a less than optimal location. I am still happy with the shock value of having a black skull in my living room.

Lastly, only one bit of bundle news, but it’s a two-for-one as there are collections of 1st and 2nd edition Palladium Fantasy over at the Bundle of Holding.

And on that note, let’s wrap there; look after your skull, and see you next week. 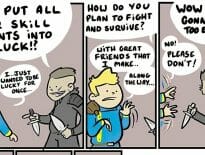 Comics Spending all your character points on Luck! 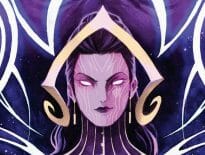