That didn’t go according to plan.

Let me backtrack and explain. Firstly, I’m excited by Cowboy Bebop. I’m a long-standing fan of the anime, stayed up to about 4am to watch the Cowboy Bebop live action (and didn’t hate it) and am absolutely hyped about the forthcoming RPG.

Secondly, I got the chance to muck around with Hero Forge.

I had the chance to mash those two things together. My cunning plan was to see if I could use Hero Forge, a name loaded with fantasy overtones, to design and produce a mini for a future Cowboy Bebop tabletop game.

Can you use Hero Forge to design a custom Cowboy Bebop mini?

I’ve many weaknesses, and perhaps the one that bothers me the most is my lack of artistic skill.

This shortcoming means I rarely use minis, can’t/don’t/won’t paint and the idea of designing one myself felt like a laughable dream.

The aforementioned cunning plan was to use Hero Forge to design a custom mini, document the process, and produce a funny but perhaps helpful guide. At my expense.

Hero Forge has no relationship with Cowboy Bebop. I’m trying to put a square peg into a round hole.

The problem? I think I succeeded. I have got a mini on the way, bundled up in the post, which I think would suit a Cowboy Bebop game. I don’t have any Hero Forge documentation because I was done after a few points, a few clicks and a handful of decisions.

I knew I had success in my sights when the Hero Forge system offered me a robotic body type within the opening moments.

So, when I say, “That didn’t go according to plan,” it is because Hero Forge was so straightforward to use, I succeeded quickly in what was supposed to be a daunting task.

Here’s how I did it; not in a guide format, but just in bulletpoints. That’s all it takes.

If I can follow these stages without getting lost, and, honestly, I think anyone can.

I did remember to take some screengrabs of the process. You can see them in this write-up, and they show the transformation from a generic fantasy hero to a causal troublemaker armed with blasters. That’s a similar move to going from a D&D game to trying the upcoming Cowboy Bebop RPG.

Are there enough options for a non-fantasy character?

Yes! But it’s clearly not what Hero Forge started as. I wanted a character with cybernetics, like Jet, and my dude (currently nameless) is a touch too ‘borg for my liking, but only a shade.

Furthermore, you can pick contemporary and sci-fi gear and weapons. Combine that with modern clothing, and minis easily escape the fantasy genre.

There’s no “anime” style, not that I found, specifically on Hero Forge. In this scenario, when I’m designing for Bebop rather than Cyberpunk RED or Shadowrun, say, I’m not sure it matters. It might be for another anime, but although Cowboy Bebop can be whacky at times, it animated towards realism rather than the more stylized anime designs.

However, there’s no doubt that there are more fantasy options than anything else. If you’re looking to create a Pathfinder mini, then you simply have a more extensive library of Hero Forge options to pick from than if you’re crafting a Call of Cthulhu investigator or, as in my case, some street hustling space punk.

Being able to change facial expressions is critical here. For my punk, it’s his quizzicle look that sells “Cowboy Bebop” to me.

There’s a big gotcha and one pit trap that I’m yet to clear.

I don’t have my mini from Hero Forge yet. Two days after completing my order, I got an email to confirm my model had been processed. That’s better than the four week warning the system gave me!

Of course, it may still take four weeks for someone at Hero Forge to carefully pack my mini and for it to make it through the current shipping crisis.

Custom colour minis aren’t cheap. Using Hero Forge is more affordable than buying a 3d-printer, of course, and their system makes it possible for a talentless oaf like me to sculpt a character I want, but I wouldn’t want to order a whole gang.

I could have designed a larger-than-human, four-legged or even mounted mini, which would have cost a lot more. In no scenario would you shrug off a broken mini in the mail.

So, yes, you can use Hero Forge to design a sci-fi model and even one for a show as charismatic as Cowboy Bebop.

It’ll be a treat, though.

And I’ll do a second post when the actual model arrives.

Disclaimer: Hero Forge paid for my mini. I would have been too worried to try without their financial support. 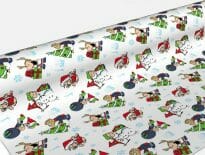 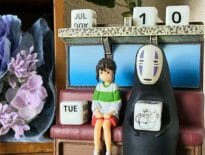