You are here: Home / TV / Anime / You’ll remember: A review of Over the Sky

Here are three things I’m sure you’ll remember about Over the Sky;

That’s to say that Over the Sky is a sentimental anime. It’ll throw flying whales at you until the sentiment hits.

I watched this during an anime festival, in a cinema, and with an audience. People started to get the giggles.

Don’t get me wrong. The audience wasn’t reduced to tears of laughter. Giggles broke out in quarters in response to surreal dream sequences. Then, as the anime equivalent of overacting kicked in, those quarters started to laugh.

But it wasn’t everyone. “Why are they laughing?” I heard echoed down from the back of the theatre.

I don’t think this was the plan but Over the Sky deals with a young woman struggling with bad anxiety, fearing that people would laugh at her. And people did.

Over the Sky looks gorgeous. That was the plan. Stunning backdrops and magical dream sequences are all part of the sentiment hammer it hits you with.

Despite that, I think the success is in the details. It’s in the peaked waves below the beautiful sunrise. It’s in the rumples on the sofa and in the monogrammed S on uniforms.

The result is scenes you’ll remember.

I have conceded that Over the Sky turns the dramatics up to 11 at times. Then, combined with dreamlike sequences, this is an anime that people laugh at. I didn’t. We’ll all remember it, though, whether we laugh at the weirdness or not. It’s not the details that stuck, but how it looked and felt. Isn’t that a success?

Furthermore, I conjecture that teens will find the events more empathic. The characters are teens coming to grips with their emotions. Subtle nudges won’t do it. I can imagine that Over the Sky might actually be quite powerful for some young adults.

As usual, I’m keen to avoid spoilers, but the plot is one of self-discovery. The last chance at it, absolutely a last chance.

The young woman, a schoolgirl, is the main character. We spend at least two-thirds of our time with her. She’s frustrating at times but not useless.
The romantic interest, a young man, gets the camera (so to speak) for a third of the movie. He’s pretty faultless, to be honest.

Is the guy here just to save the damsel in distress? Hmm. He certainly tries. However, it might just be enough to prove that he is worthy of her. I think the jury is out, but the verdict will either be “good to better” or “damsel trope”.

Most importantly, while this ride’s start point and destination are safely predictable, the route taken is not. I’m confident Over the Sky will wrong foot most audiences at least once or twice.

It’s the best sort of wrong-footing, too. You know, when the feeling of “Oh, I didn’t think that would happen…” fades to the “but I’m not surprised it did” feeling because it makes sense.

I didn’t laugh at Over the Sky, although I may have laughed with it at times.

And I’m being defensive of it. It gets the thumbs up, just about, but only one. The director pushes me away by ramping up the “notice how empathic the story is”. I’m not a teen. I can work with more subtle touches.

The Japanese title seems to translate into “You Are Beyond”, so I guess we’ll have to see how the feature-length is referred to if it gets a broader release.

I loved the movie but I was lost and confuse at times. The biggest holy crap I had was when I saw the connection between her and the goldfish. I’m not one to think very much during a movie but this one certainly made me work up a sweat.

You’ll remember: A review of Over the Sky 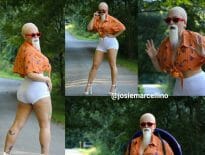 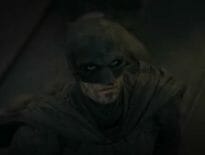 Movies The Batman trailer wins fans as it slides into the…
wpDiscuzComment Author Info
Manage Cookie Consent
This site uses cookies 🍪, and links are ads that may earn bloggers some money 💰, and with this alert, I very much hope that these dark truths 🧌 are acknowledged.
Manage options Manage services Manage vendors Read more about these purposes
Preferences
{title} {title} {title}
Loading Comments...