Vast Grimm is a MORK BORG third party RPG from Infinite Black. I backed the Gamefound for it, and the RPG was one of the first, if not the first, to pick that crowdfunder over Kickstarter.

This sci-fi is set during the plague apocalypse.

Would you enjoy your PC birthing a mutant second head, a twisted parody of a face that slowly erupts from a bleeding neck and says nothing except to wail and howl when other infected are nearby?

Think you might be tempted by a sci-fi game without rules for spaceships, except for the role to see if this life raft has actually broken down or not?

Me? I’m up for it, but only if we go in with both feet. I think Vast Grimm must be played all or nothing. I think it needs to be ramped up to ten, fully dark, disturbing and adult. Oh, I’m not thumping the edgelord bible here. I am saying that I’ve dozens of sci-fi RPGs, and if I’m to play Vast Grimm, I want the absolute vastness and grimness of it.

I’m also glad I went big on the Gamefound project, and I’ve physical goodies coming. This RPG isn’t always linear in layout, with crucial text sometimes on the right page in a spread, not the left, and that fits open books better than scrolling PDFs.

I regret not getting MORK BORG at Kickstarter. I thought I couldn’t afford it and failed to predict how it would take the world by storm even though it looked amazing.

Thankfully, I don’t need MORK BORG to play Vast Grimm. Typically, I’ve now probably spent more on Infinite Black’s project than I would have ever on an original MORK BORG.

This deadly sci-fi doesn’t rush to explain the rules to you, but there’s only a few to get, and it gets there when it gets there. Here’s the gist;

More important than the dice mechanics in Vast Grimm are the setting mechanics. This is the sci-fi setting, and it’s defined solely by Them.

It’s the future, and humanity has spread across the universe. If there are intelligent alien races, they don’t get much of a look in. There are space monsters.

A few hundred years ago, They were let out.

These are six old ones.

Don’t imagine towering and planet; imagine a plague. The end of the universe has been brought about by tiny parasites. They infect the air and anything that breathes it. Humans, animals or the aforementioned space monsters.

The infected may seem normal, and they might not even know if they’ve been infected. Almost every possible interaction in the last few days of this universe is likely to lead to infection.

Or, the infected may appear to be mutants, with powers and yet willpower of their own to do what they will. These infected might be survivors fighting for a cure or escape or devoutly working for Them.

It is actually possible to survive the infection. It’s even possible to be infected again.

It’s also possible that the tiny parasites in a body grow so large that they burst forth, shredding the host they grew in and emerge as Great Wurms.

As noted, I don’t have MORK BORG, but I believe the world is doomed in that black metal fantasy RPG.

The sci-fi future of Vast Grimm is also doomed. Given there’s a dice roll at the start of every day to see just how close that doom is, I’d suggest games will be measured in in-character weeks before the end happens.

The location of this portal is randomly determined at the start of the game by the GM. That’s the last bit of setting magic. The random table for this portal means the 100+ page rulebook does have some locations detailed.

Without this pinprick of light, the darkness of Vast Grimm wouldn’t be half as bleak.

Space is vast, but Vast Grimm is not. There are about 120 pages, but most of that is given over to random tables. These tables are about the tortured history of your almost certainly doomed character or the painful horrors of infection.

Vast Grimm doesn’t have factions, locations (beyond the potential area of the escape/reinfection point of the portal), barely any equipment, ships, civilizations, currency, distances, technology or any of the usual trappings that sci-fi games write themselves around.

The only thing in Vast Grimm is the Grimm and almost certain doom. If you want to play, you’ve two routes; go light with the story and just bridge from one encounter to another, or have a GM happy enough to spin a universe around its own death.

I’m glad I backed Vast Grimm at the level I did, but I don’t think it’s going to beat MORK BORG at its own game.

I want to play and even GM this game, but I wonder if I will. Given that I want to twist the dark dial as far as it’ll go, I don’t think it’ll suit any of my current gaming groups.

At worst, Vast Grimm is a work of art, and I suspect highly collectable. At best, Vast Grimm is an excellent example of using a solid pillar to craft a memorable RPG around. The PDF is currently at DriveThruRPG for $15 and worth every cent. 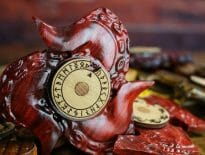