This is Audio EXP for the 11th of September 2021, and the title of this episode is “Bundles, Platforms and RPGs”

[The following is a transcript of Audio EXP: #113]

I often start these highlight podcasts off with some stats. This week there’s only a light version of that. I did get around to putting some Geek Native designs onto baseball caps but not writing up any competition polls.

I can tell you that the Off Duty Gamemaster has been the most popular design to look at so far. No sales, not yet. Geek Native is too indie to have a successful store, but people who view the goods seem to like the GM cap.

Or perhaps it’s just because I put it first on my list of hat designs.

In general, the Snaps from Mind Flayer design is the overall most popular. It’s even sold some merch. It’s hard to imagine if you’ve not seen it but imagine a cute mind flayer… taking a selfie.

You can now get that as a large desk-sized mouse mat. It’s bold!

I’m a Redbubble fan. If you’re an RPG publisher and have bought the commercial rights for art you’ve commissioned, you should also look at using it for merch. Make sure the artist is happy with the plan. It won’t cost you anything, so while I’m not an expert at monetising RPG content or running businesses, I figure this is a no brainer.

An example of a publisher making clever use of a platform and designs in the RPG and tabletop news this week is Brittannia Games. They’ve launched a Chivalry & Sorcery STL line.

These are files, made once and can now be sold forever, letting people print out official minis for Chivalry & Sorcery games using their 3d printers at home. The license is for personal use only, and Brittannia is using DriveThruRPG for this.

I’m sure it’s not cheap getting 2D art turned into 3D designs. However, if you’ve already done it for a Kickstarter, why not commercially make the designs available with a license you’re happy with.

I think the C&S minis look pretty good, and one day I’ll get a 3d-printer.

A company that does minis, and clearly doesn’t need any help in monetising RPG content is Dragori Games. Their current Kickstarter, Tanares a 5e setting, is currently sitting at over one million Pounds; that’s nearly 1.5 million Dollars.

RPG celebs like Ed Greenwood, who created the Forgotten Realms, Amy Vorpahl and Skip Williams are involved in the project.

Two things strike me about it, though, not just the great minis and the use of 5e to bring more IP to life.

Firstly, the Kickstarter looks and feels like a pitch for a board game. That’s clearly related to the minis but not entirely joined at the hip. One of the key contributors is Bruce Nesmith, who has TSR (1) experience back in the day but more with Bethesda Game Studios on computer games. Solo computer games.

Secondly, Tanares is pitched as a battle and has solo rules built-in. I think this is an important reflection on the changing landscape.

It’s not that RPGs are losing their social element, although perhaps some of us are. It’s that they are adapting the broadening hopes and demands from people interested in them.

Another success to call out, a thoroughly indie one, is Stellagama Publishing. They’ve released Cepheus Deluxe this week and it’s already an electrum best seller on DriveThruRPG. That’s an OSR sci-fi system compatible with the core Cepheus Engine SRD. There’s a growing community around it, and, anecdotally, I’ve not seen any of the Status Quo Warrior hostility that I sometimes fear from team OSR from it. That’s a good thing.

Cepheus is only a couple of bucks, therefore worth checking out.

A game that’s not yet ready for retail, but which you can find an exclusive preview of on Geek Native is Legends of the Metaverse.

That’s a 5e superheroes game with some amazing art. The blog doesn’t just have a gallery of some of those illustrations but a generous preview of the rules from publisher Good Brother Studios.

Legends of the MetaVerse is due out on Kickstarter on the 14th.

Another 5e title worth knowing about on Kickstarter is The Curse of BloodStone Isle.

It looks good, more great art and the headline reason to be interested is that Mark Ren-Hagen, the Vampire: the Masquerade creator is the man behind the project. And yes, the setting merges D&D’s high fantasy with pirates and vampires.

I think the reason one step back is more interesting. It’s a new company making the game; Lostlorn. Lostlorn is also the name of the setting that BloodStone Isle is part of.

I think if BloodStone is successful enough, we’ll see more Lostlorn content. We’re already told that in Lostlorn games, you play the monster.

So, yes, this could be the start of something else interesting for D&D and perhaps darker, perhaps even more adult.

There’s more. Another high profile creative name, Hickman, is doing new content for 5e too. Skyraiders of Abarax is the first adventure world from Tracy and Laura Hickman since Dragonlance.

That’s coming to Kickstarter, but we don’t have dates yet.

I don’t think it’s entirely a conscience that Tanares is set around gladiator squads, BloodStone Isle around pirate crews and Abarax around ships of Skyraiders. Each time we’re bringing a social structure to a 5e setting, D&D and Forgotten Realms are light on those, so these settings introduce them to weave stories around.

But that’s a lot of Kickstarter, isn’t it? I know that’s not new, and it’s worth acknowledging that while I was promoting the likes of DriveThruRPG for STL files and Redbubble as sensible platforms, Kickstarter is also a dominant platform.

Set up by the Zine Creators Workshop, SideQuest is designed to complement and be in addition to Kickstarter’s ZineQuest.

In November, use the SideQuest hashtag, and any crowdfunding platform of your choice for your RPG Zine and the community will try and help promote it.

Hopefully, this will reduce the bottleneck that ZineQuest has become without diminishing the success of a Zine boom.

We’re back to Kickstarter but stick with me because if you’re looking for a system for your Zine, then you might want to check out BURST.

The project has been funded despite it being a pay-what-you-want for the core rules. It’s a very lite, barely illustrated, zine-style genre-agnostic system.

Most interesting, at least in the context of this conversion, is that you can resell BURST or anything you make with it. You know, make money. It’s a safe system to pop in your Zine and sell the bundle for money.

Speaking of bundles, there’s been a lot of action this week. As ever, here’s a summary.

First up, a group of RPG publishers have got together at DriveThruRPG for a Hurricane Ida Relief Bundle.

Humble Bundle are pushing the charity button too. 100% of the money, they say, from the exclusive deal with Stephen King will go to the ACLU. There’s only one thing in the bundle, but it’s the never seen before Red Screen from the master of horror.

Also in Humble, celebrating a 30th birthday, is a Team17 deal. That’s the company behind the incredibly fun Worms computer game.

At the Bundle of Holding you can get a host of Monte Cook Games’ Numenera RPG content.

Lastly, and for UK listeners, there’s a competition to win an exclusive Red Eyed Boglin.

Do you remember Boglins? Rubbery puppet monsters from the 80s? They’re back.

On that note, let’s wrap there. Keep safe, I hope you find a bundle you fancy, and we’ll see you next week. 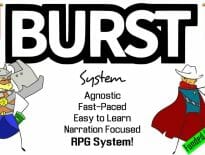