[The following is a transcript of Audio EXP: #110]

In the RPG Publisher Spotlight this month we have Trash Mob Minis. I’m pleased to say the feature on Trash Mob will be going live this coming week, so stay tuned for a sneak peek into a successful one person and Patreon powered publisher.

Geek Native’s own patrons get to vote for a publisher or creator to appear in the Spotlight, and we’re approaching the end of the month, so if you’re eligible to vote, please do.

That’s a good life rule, by the way. If you’re eligible to vote, please do.

Speaking of life, the “welcome home” intro to this highlights podcast feels especially suitable this week. Welcome to my new home.

Geek Native, me, moved flats this week. That’s why there’s less content than usual. I was offline for about three days; that’s longer than I hoped for but a lot less than I feared.

An hour ago, Amazon delivered a new USB cable for the microphone and, since I’m poor and might as well be poorer after the expensive of the move, an arm for it that’s now clasped to the end of my desk.

In terms of timing, that’s by the skin of my teeth stuff. I’ve spent too long finding things in the chaos of the unpacking. It wouldn’t need a great detective to have predicted that but, at times, I swear even Sherlock Holmes would have struggled to work out what I was thinking when I made packing decisions.

And we can start this podcast with great detectives too. Back in March, I had a copy of the comic book Alder to giveaway. That’s the Sherlock Holmes character, the super-intelligent woman who is a match for Holmes.

To enter the competition, people have to say which detective they would want to team up with. It wasn’t an open poll, people had to pick from my shortlist, but there’s now a comment section on the blog where you can give me better suggestions. You can find the link via the show notes.

Here’s the top five in reverse order, and, oh, no prizes for guessing first place.

In fifth place, Irene Alder herself – she’s a detective of thoughts in her spin-off – and with 9% of the votes.

In fourth place, Philip Marlowe with about 10% of the votes.

Then, in third place with 14% of the votes, there’s Miss Marple. I think I might have voted for Miss Marple if being teamed up with her would mean tea and cake.

Then, in second place, Hercule Poirot secured an impressive 21% of the vote. I’m rounding down, and he’d hate that.

That predictable first place, with 35% of the vote, is Sherlock Holmes himself.

Who would you have gone for?

The headline news from this week is not great. I’m sorry to say.

We learnt that Steve Perrin passed away. He had been with Chaosium since the 1970s. Chaosium’s President, Rick Meints, called him an innovative genius, and it’s only now I have an idea of just how important he was to the world of RPGs.

The other negative news, breaking and developing this weekend, is the wave of publishers cutting ties with The Broken Token.

Gloomhaven publisher Cephalofair wants nothing to do with them, Fate’s Evil Hat Productions, and the board game makers Iello or Floodgate Games are all cutting ties.

A few days ago, via the blogging platform Medium, an ex-employee of The Broken Token went public with allegations of sexual assault and other crimes against The Broken Token’s CEO.

These allegations are disputed by him.

However, these tabletop companies are putting actions and sometimes making donations to appropriate charities in place now. Details, adjustments, apologies and all the rest can be worked out later. What these companies are showing is that you can believe the victim first and do something straight away.

Meanwhile, GAMA has announced they’re working on a code of conduct for their members. The Broken Token is currently a member.

This code of conduct won’t be optional. To be a member of GAMA, companies will have to follow it. It will be fascinating to see what GAMA puts in this code of conduct if it is compulsory. It’ll also be gripping to see if GAMA, which charges for membership, will actually expel members for violations.

However, Geek Native’s return to blogging started this week with less weighty stuff.

The first piece posted from the new HQ was the final The Eternals Trailer.

It’s really dividing people. There’s an arty vibe to it, but there’s no way you can say this trailer doesn’t have plenty of superhero action either.

I also had time this week to write-up Starlogs. It’s free.

Starlogs is a framework for sci-fi RPGs like Star Trek Adventures to allow you to play them alone. It’s a methodology and accompanying tables to bring to whichever rules engine and game world you want, but very much Star Trek favoured.

It’s absolutely worth having, especially at that cost!

In RPG news, and in temptation and controversy, the anime Goblin Slayer is getting a tabletop RPG.

Well, it has one already. A Japanese game was published in 2019, and now Yen Press, which usually import and localise manga, will bring the game to the West. Despite the highly mature tones and violence in Goblin Slayer, I’m inquisitive about the game.

A far less controversial game, but perhaps equally challenging one, will be The Op’s Cuphead Fast Rolling Dice Game.

Another new release to know about is Games Workshop’s Imperium magazine.

The Hachette-powered subscription deal does two things for two audiences.

One audience is newbies who would appreciate tutorials on the basics of painting and the Warhammer 40K universe. The other audience is veterans who know all this and who want to go deeper.

The magazine also includes models on sprues along with accessories and tools for making and painting them. A reason for subscribing now and never missing an issue is you’ll end up with a Necron army and an Imperial one at the end.

If you go for the Premium subscription, and what a clever idea, you get extra goodies. It’s a bit like a loot box light tucked on the side.

Speaking of models, mentioned in the RPG news summary of Routinely Itemised, but not written upon Geek Native due to move is the news that WizKids will do Tal’Dorei and Critical Role minis.

In previous episodes of Audio EXP, we touched on the news of WizKids ramping up their paint and mini lines to take on Games Workshop in a more head-on way. I cite this as further evidence even if models of famous characters is a far more traditional WizKids move.

Equally mentioned in the RPG news summary, but cut from a write-up due to time pressure, is the news of Asmodee doing an RPG. It’s the Zombicide Chronicles game. So, not new news, but actually happening news.

Asmodee aren’t doing it alone, but imagine if they had been getting fully into RPGs – who would they buy? And how does that contrast to Edge supposedly being their RPG specialist for their remaining titles? It’s not Edge doing Zombicide; it’s CMON and Guillotine Games.

The last bit of news I have for you this week, and hopefully, it’s more like business as usual next week, is that Chaosium has bought the rights to Cthulhu Britannica and World War Cthulhu from Cubicle 7.

The two ranges were published under license in the first place, a license that expired four years ago. However, they’re now games that Cubicle 7 are unlikely to see again. Once more, I wonder whether they’re tempted to establish their own IP or not.

Chaosium will release the books in both ranges, for Call of Cthulhu 7e, but are suggesting no immediate plans to extend either.

In competition news, I’ve one that’s part of a Warhammer bundle from the Black Library on Fanatical.

As I like to remind people, Fanatical is the sister site to D&D Beyond, and right now, you can get some Warhammer 40K, or Age of Sigmar stories from it.

Answer a question about your favourite Warhammer range on the Geek Native blog, and you might win one of the Age of Sigmar bundles.

The other competition will be over in days, as the publisher wanted it to end when the book comes out. PhD and sci-fi author, Alistair Reynolds is returning to the Revelation Space range with a standalone book called Inhibitor Phase.

At the time of recording, there are only 5 days left on that competition, and if you take part now, you’ve about a 7% chance of winning.

On that note, let’s wrap there. Keep safe, embrace the grimdark future, and we’ll see you next week. 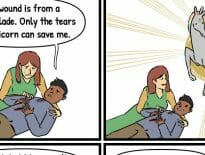 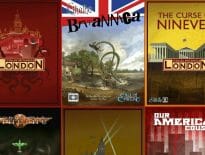