As an experiment, the winner of the RPG Publisher Spotlight has been getting a shoutout at the start of the Audio EXP podcast. That doesn’t mean the article write-up has gone away.

It’s with great satisfaction that we can focus on Trash Mob Minis this month. It’s a small company riding the wave of paper/virtual minis as the tabletop hobby grows, matures and evolves.

There are two basic ways to get involved with Trash Mob Minis and Jess’ art. You can support via Patreon by paying a little every month, or you can buy packs as one-offs from DriveThruRPG.

Speaking of Patreon, Geek Native’s own patrons voted for Trash Mob Mini to have the spotlight in August. You can see the current poll via the spotlight page.

An introduction to Trash Mob Minis

I reached out to Trash Mob and to founder Jess Jennings. I’m pleased to say he got back in touch and despite a busy schedule (and despite Geek Native’s own move), we’ve coordinated.

Who are Trash Mob Minis?

Trash Mob Minis is just me, Jess. I design, draw and publish all the minis myself.

What do you think you’re most well known for?

Probably my cute kobolds, but also there was that one time I released a set of mimics that all had huge boobs.

I think I’d like to be known for making monsters fun and charming. I get frequent messages from DMs telling me their players were more interested in befriending my minis instead of fighting them, and I think that’s cute!

Why make a move from animation to tabletop?

I currently work in animation as a day job. I am a landscape model maker at Laika. At night I work on Trash Mob Minis. Translating the visual principles of animation to paper minis was a big reason why I started doing this business. Animated characters should have clean, recognizable shapes and poses, the same goes for miniatures on the tabletop!

In my intro, I noted that the tabletop hobby has evolved. People are using minis more than ever. The theatre of the mind is still a big part of RPGs, important to gamers like me, but the growth of virtual tabletops has meant that a whole new generation of gamers uses virtual minis.

And it’s pretty cool, right? Eventually, you might treat yourself to a portrait of your character if you can’t draw. A virtual mini can happen earlier, even right at the start of the game, and your character immediately has a visual identity.

I use 2D minis mainly as paper minis, though as things on the tabletop. I wonder which happens more often; paper or virtual?

Do you think your minis are used mainly on virtual tabletops or printed out?

Definitely printed! I didn’t even know about VTT gaming when I started publishing, so a lot of my early work isn’t exactly VTT ready.

Are resin or metal minis too expensive?

That’s a hard question. There’s certainly a lot of options these days for a wide variety or minis at many different prices, and painting minis is a great hobby, but from my personal experience, that hobby really adds up! I would say it’s like any hobby, it can be expensive or affordable if you know how to spot good deals. Of course, the downside of buying conventional minis is you need to buy/prep a mini of each individual unit being fielded. With paper minis, you can print as many as you need!

How do you think 3d-printing might change the hobby landscape?

Definitely in a positive way! It doesn’t matter if you’re painting your own minis, building terrain, cutting out paper models or 3D printing, it feels so good to create and show off a new model, and then add that model to your game! TTRPGs are a wonderful and unique outlet for artists. We can contribute directly to the interface of the adventure and really feel like we are part of these worlds we create together.

What makes a good paper or 2d mini?

Readability above all else! Paper minis are intended for a very challenging context. They’re very small, and often used on a tabletop where the lighting might not be ideal. A bold silhouette and high contrast color blocking do a lot to make a mini pop on the table.

Also, rear artwork is absolutely mandatory. Anyone can clip a pic from Google and mirror it on a standee, and that is fine, but art created specifically for paper minis should always have rear art.

A final important component of paper mini art is models should have a black “border.” White borders wash out the mini’s color on the tabletop, but a black outline actually vanishes on the table, and makes the eye focus on the art.

What tips do you have for GMs/DMs looking to build their initial stock of battle maps and minis?

Look for assets you know you can get a lot of milage out of in your games. There’s no perfect “one size fits all” bundle of everything you’d need for all adventures ever, but if you know many of your encounters take place in the woods, a handful of scatter terrain of trees, fallen logs and bushes. A nice variety of monsters is always handy. You don’t need a collection where each model represents exactly what’s on the table, though paper minis certainly make that option much easier and more affordable.

As far as maps go, I find the standard wet-erase battle grid is such a useful tool to have!

The future of Trash Mob

As an aside, I invite you to compare Jess’ responses in the two previous sections. When given a chance to talk about himself, or Trash Mob, I get a line or two back from Jess.

Given a chance to talk about art, the hobby, and the minis themselves, Jess is clearly more comfortable! I think that’s always a good sign in an artist or other creator.

Are there any other projects up your sleeve that readers might want to know or check out your Patreon about in the future?

I’m always working on new minis to release every month, so there is always something new! I also frequently collaborate with other artists and creators to release themed bundles on our Patreons. We just released a desert-themed set, complete with unique minis, models, a soundtrack, complete adventure, and even pop-up terrain! We usually release these sets around holidays, like Halloween or Christmas, so keep your eyes open for those!

What’s coming up in the RPG hobby that has your interest, and why?

There’s some Dungeons and Dragons books coming out that I’m very interested in! I am especially excited for Fizban’s Treasury of Dragons, but I also love dragons, so I’m a pretty obvious target. I’ve never been interested in the MtG setting books, but the Strixhaven manual really has my attention. I might have to scoop that one up to.

Trash Mob produces minis for backers all the time but since Jess is also on DriveThruRPG, let’s look at some of the latest updates there. 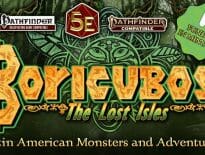 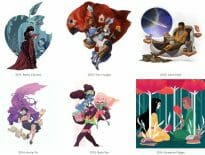