Vaesen is a horror RPG from the award-winning Free League Publishing.

The game is based on the gothic art of author and illustrator Johan Egerkrans, was a Kickstarter campaign that funded in 13 minutes and is set in an alternative nineteenth century. In this world, monsters are real.

Vaesen: Mythic Britain was announced at the Tabletop Gaming Spring showcase. It’s a new sourcebook and a campaign book set in the British Isles, bringing British folklore to the game.

It’s very early days, and plans for a Kickstarter aren’t even confirmed, but Graham Davis is believed to be writing the expansion with Egekrans once again providing the art.

Free League must be busy, with their campaign for Lord of the Rings 2nd edition joining the exclusive $1m Kickstarter club for RPGs and Ruins of Symbaroum bringing that dark fantasy to D&D’s 5e ruleset.

The video below shows the Spring Showcase interview with Tomas Härenstam. A conversation about Vaesen’s nordic folklore roots led to the news that Mythic Britain was in the pipeline and would expand the game’s mythology.

I keep hoping for a Vaesen: Mythic Japan set in Meiji era Japan. 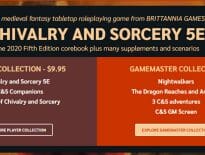