Now, the sequel to The 6 Voyages of Lone Sloane, Chaos goes on sale on the 13th of October.

In The 6 Voyages of Lone Sloane, it is 800 years after the Great Fear, a catastrophic event that changed the world. Lone is a rebel who is captured by an entity known as He Who Seeks and transported to different dimensions.

Fighting for his life, Lone Sloane is caught up in an intergalactic conflict involving space pirates, massive robots and even dark gods.

Just as the Silver Surfer battles against Galactus or Ulysses and the gods, Sloane is left to wander in a strange universe. Drullet’s influences also include the likes of Lovecraft and Escher.

Lone Sloane Chaos picks up 10 years later when the rebel comes face to face with his old enemy.

Pre-orders on Chaos are open, for Kindle, hardcover and Comixology.

The story, 74-pages long, is written and illustrated by Phillipe Druillet himself and published by Titan Comics. 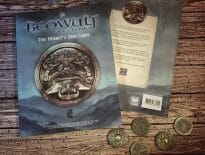