You are here: Home / Books / Comics / An interview with the Robot Slayer Vincent Kamp 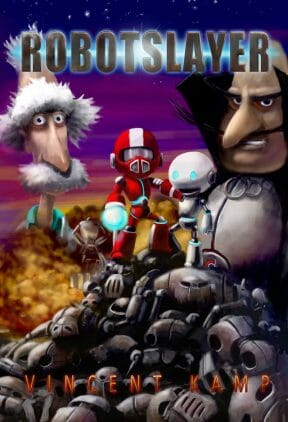 Robotslayer is both an illustrated childrens’ book and iOS app. What’s the target age group for the book and how old would kid need to be before being trusted on the app?

I think age 6 or 7 is probably the key age where the kids can start to really identify with the characters and the main thread of the story, the idea of being brave and overcoming what you may have once thought was impossible. Having said that, my 4 year old and his buddies love the interactive nature of the app and we often dive about the house pretending to take on crazy robots and at the other end of the scale, many adults have really enjoyed the story both with and without their children. If I had to give a range who might take the most from the story, it’d be 6-13.

Your day job is as a busy co-owner of a company that designs and manufactures scientific instruments sometimes used in stem cell research. Your book is about robots that started out with good intentions but which go crazy. Is there a connection here? A commentary on artificial life?

I’m involved with cutting edge technology on a daily basis and while autonomous robots are not something we work on here I can see how rapidly science and technology are advancing and while not that long ago we joked about a Terminator-led apocalypse there are now virtually autonomous robot weapons in prototype form. Maybe we will need a team of Robotslayers to take on some crazy robots in the not too distant future!

Waterstones Dorking has agreed to stock the book. How much of a help is this to you? Is it mainly PR or can a single store sell a significant number of books for you?

I don’t know what sort of effect Waterstones will have on the sale of my book, I keep hearing how bookshops are really struggling but I know that our family loves going into bookshops and flicking through the books. I think by releasing the book and the app together it may give the old dead tree model a new lease of life. There’s still something special about printed words and pictures.

Are there any indie comic book stores who are also stocking Robotslayer? Here’s a great chance to namecheck them.

So far Orbital in London is keen to stock it and we’re talking to a few others, we’ll see what happens.

You’ve also built two impressive robots to accompany the book. What does the future hold for these fellows?

There are actually going to be four in total. Leo and Benny are ready for lights and paint in time for the launch party on Dec 11th (all are welcome, at Dream Bags Jaguar Shoes in Shoreditch – snap your ticket up here on Eventbrite!). I may well make some more. I have a design in mind for a wearable giant robot suit. Just quietly there are plans for Robotslayer 2 and a much more sophisticated game but keep that on the down low! 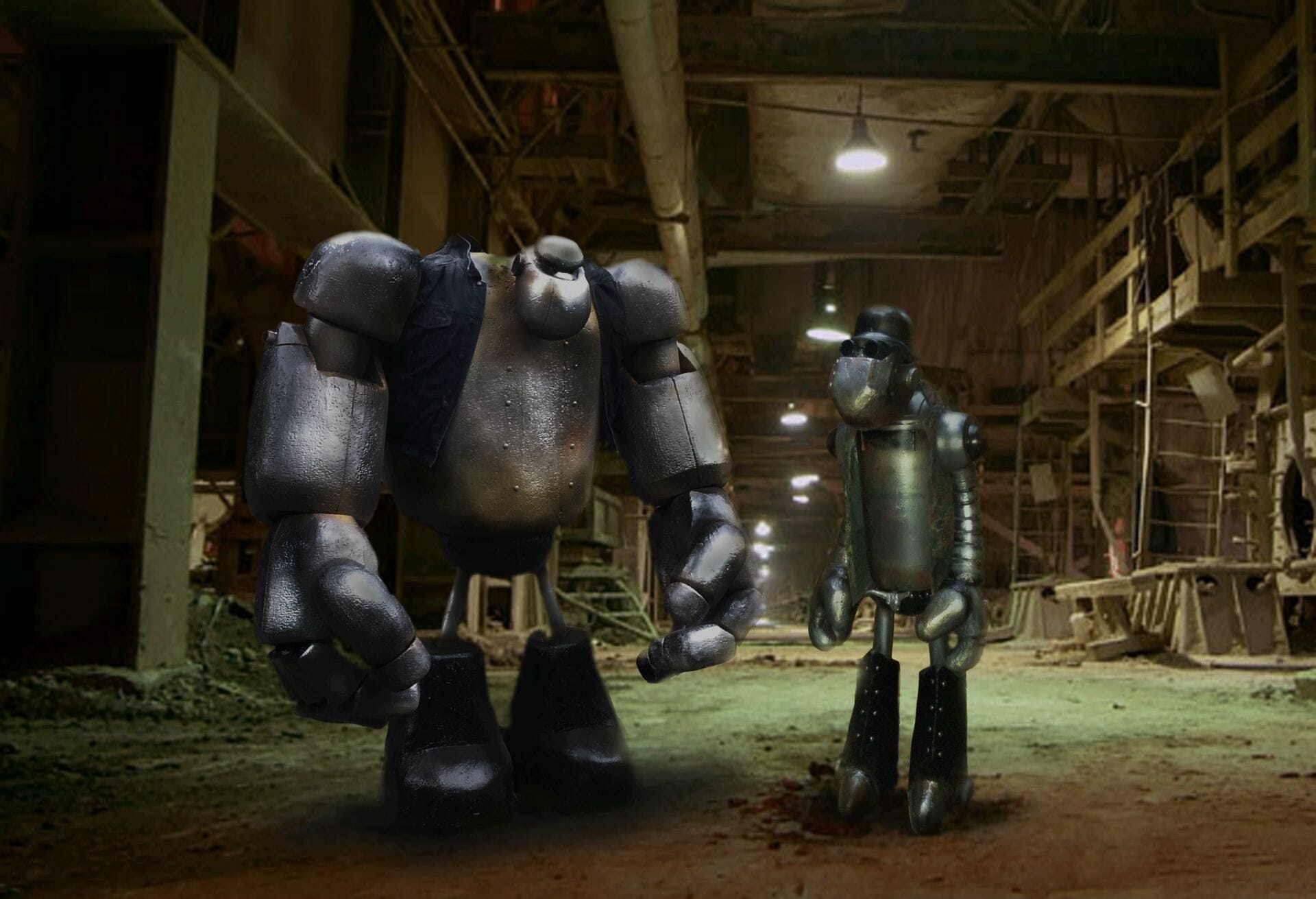 What was working with Hover Studio to build the app like? Did the agency really understand your intended audience?

Working with the guys and gals at Hover Studio and Animade (their sister company) was just amazing. When I started looking for people to work with on Robotslayer I wanted to be sure that people were enthusiastic and really got what I was trying to do. I visited a couple of larger companies but they didn’t get fired up and I didn’t get the feeling that they would bring anything to the table but software skills….yaaawn. Hoverstudio were just excited to be part of the project, full of ideas and possibility. I feel that we are now more than just collaborators on a project. They are great people to work with.

Geek Native’s own audience is that of gamers – traditional roleplayers, Dungeons and Dragons, dice, paper and pencils – a group of people willing and able to use multimedia in their bedtime storytelling with their kids. What about everyone else? Do you think X Factor parents will struggle?

Absolutely not, Robotslayer is a traditional story that parents will identify with, as far as the interactivity goes, just stand back, the kids will know exactly what to do.

Do kids read enough these days? Are you concerned that the zombie box and computer games are getting in the way of children liking books.

I’m not worried about this at all. The really good computer games are successful because they embrace story telling. My boys get bored of games quite quickly if they can’t see the point but the games that have a good story going through them like a mission really capture their imagination. The games give them some control where in life they are always being told what to do by a grown up. My boys also love being read stories by my wife and I and Leo (the older one) loves reading comics and books. I know it’s a cliché but it’s all about balance.

What are your fondest memories of the project?

Easy, I loved talking about the story with my boys and getting their input, I loved talking about a scene or some new part of the Robotslayer suit and then drawing it up for them. I guess I also loved building the robots, I just thought one day that it would be really cool and then started learning about how I could go about doing it. When they were standing in front of me I couldn’t quite believe it.

Are there any comic book authors and illustrators you draw inspiration from? Has anyone influenced the look and feel of Robotslayer?

I like lots of different comic book authors but in terms of illustration, I love Dreamworks and Pixar ‘art of’ books, particularly work by Goro Fujita and Dice Tsutsumi. I’m influenced by great stories told through images and or text, whether animated films, movies, comics or books. Hopefully Robotslayer is a combination of all of them! 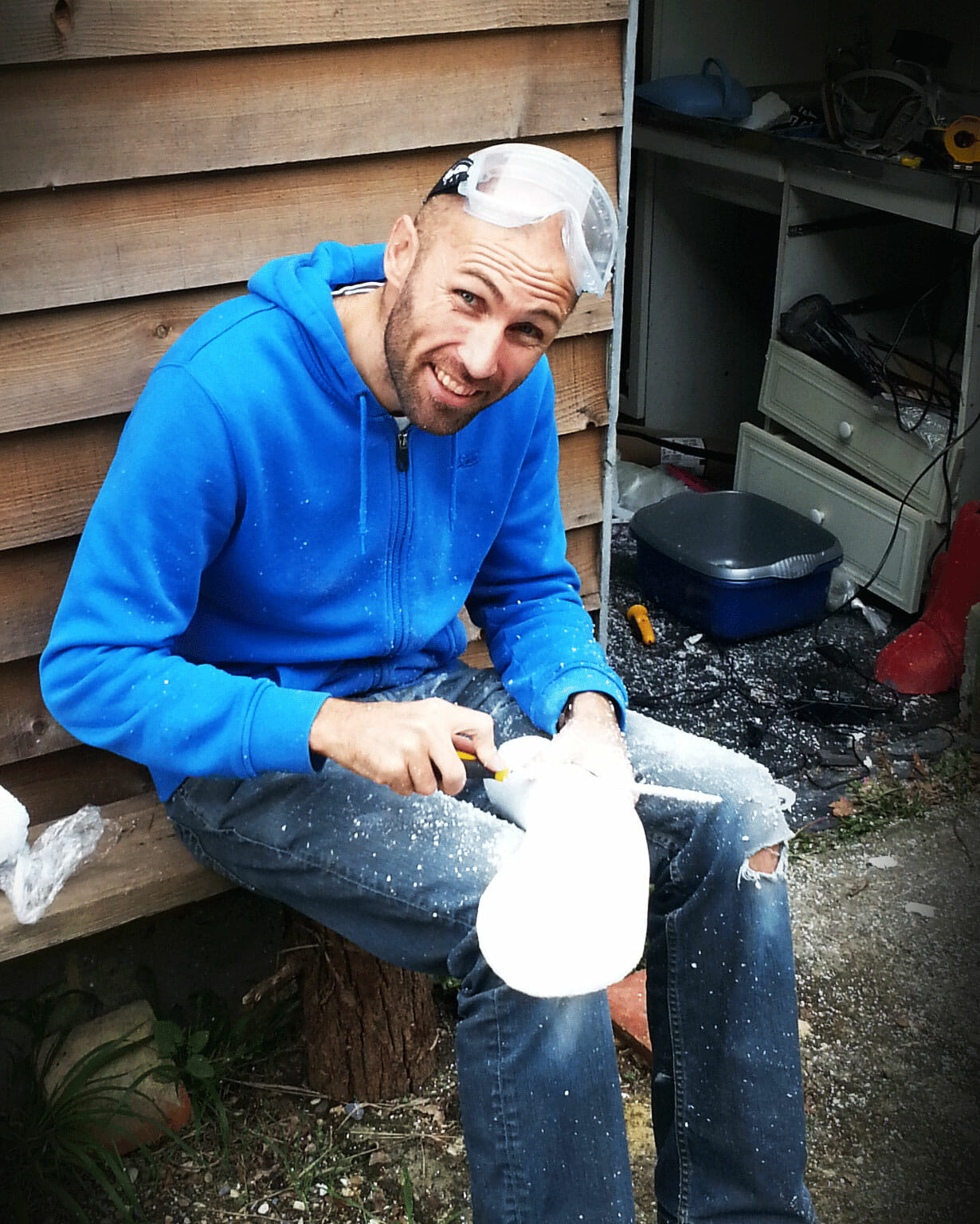 Robotslayer is an independently/published graphic novel, that is being simultaneously launched as a 60-page story and interactive iOS app, including interactive animations, sound effects and an exclusively-composed film-like musical score.

Robotslayer will be available to purchase from the site, Waterstones, Dorking and independent comic shops and in a world-first, simultaneously downloadable from the App Store in mid-December.

The app includes a shoot ‘em up game putting the player in the role of a Robotslayer, who must save Robotolis from Dr. Grububble’s robot army.

To help promote Robotslayer, Vince has created a number of robots from the story in real-life, including these two, below – the bigger one is 8 foot tall!

An interview with the Robot Slayer Vincent Kamp 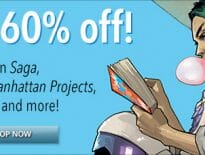 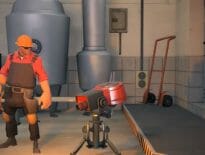