You are here: Home / Books / Comics / The Harbinger: New comic series and movie

DMG and Paramount are working on The Harbinger film. Paramount bought the rights from Sony – which removes it from the Bloodshot universe, for good or ill.

Today, Valiant Entertainment, the comic book publisher behind The Harbinger announced a new series which will arrive in the summer of 2021.

Jackson Lanzing and Collin Kelly are co-writing, and the Spider-Gwen and Batgirl artist Robbi Rodriguez will illustrate. The new series is designed to introduce readers to the most powerful telepath on the planet; Peter Stancheck.

Stancheck, Harbinger, is the only being on the planet who can activate the latent powers in others like him.

Despite the power Harbinger has at his disposal, and a story which introduces new allies, villains and even costumes, writer Collin Kelly insists the series tells a very human story.

Like many of us, Peter has made mistakes. People have been hurt. We have no interest in ignoring that part of the character’s history.” The co-writer added, “By acknowledging those mistakes and taking responsibility for them, Peter will become the person – and the hero – he has always had the potential to be. Peter Stanchek will be more than a hero; he will be a harbinger for the world we want to see.

Meanwhile, co-writer Jackson Lanzing highlights how Harbinger will be used to advance the Valiant Universe story. 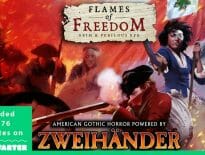 Tabletop & RPGs Flames of Freedom: Overthrowing the British while …