You are here: Home / Games / Tabletop & RPGs / The creepy occult horrors of Flames of Freedom

Flames of Freedom is a Powered by Zweihander RPG due for Kickstarter. You can click the notify me on launch button already.

There’s a free to download preamble on DriveThruRPG for the game already which introduces the American Revolutionary War of 1776 campaign setting.

There’s more than one war going on in Flames of Freedom, though. Under the surface, away from society and popular science, the occult and supernatural are real and active.

Geek Native’s been lucky enough to score a look at some of the critters, and creepy horrors characters in Flames of Freedom might encounter. Just in time to give Halloween GMs inspiration for their own games too!

If you ask me, and I might very well remind you that you did, it’s a sort of divine intervention. When I heard what William did to Bess, it filled me with the Lord’s own rage – a magistrate’s son won’t see true justice, that’s for sure… but to think she’s the one that came back and scratched out his eyes… warms my heart…

The thing crawls forth from the muck, all in tatters. Dad said to grab our things, but I was frozen in place. I could not look away from its… otherness. Its eyes burned a violent red, like the cinders of a fire. In place of its guts, all’s I saw was faces and hands, trying to tear their way free…

No, we do not go there. The spirits do not sleep in that earth – it is soured with the blood of men who slew their brothers on that land… sliced into them like cattle and devoured their flesh in the dead of winter. None may cross that land without seeing their faces, stretched in agony and terror, and none who gaze upon them live to see the next harvest…

I’d never seen one that large – it swooped down like the Devil himself, shriekin’ like a banshee. I swear it near to bit Elspeth’s throat out, clawin’ at her face and hair like some manner of wretched demon, but her crucifix lit up as soon as it tried… shot like a star into the sky. I don’t reckon I’ve seen anything like that but suffice to say… we don’t go into that cave no more…

George thought it would be funny to sneak into the cave while we were supposed to be choring. Pa wouldn’t like it, but Ma is the humorous kind and she’s quite fond of pranks and George would rather hide in the dark than tend to his wife’s caterwauling these days – his words – Mary’s the sensitive kind and now her days will be even darker. I still remember the way that monster lifted him up off the earth, thrashing him to and fro like a salmon… and the way he hit the ground like a ripe pumpkin…

…and pray that our Heavenly Father does not lead us into the hungry jaws of the wicked. Pride is a sin that fattens our soul, gorging us on false love for oneself and the world, which gladly leads us from the Lord’s pasture into the clutches of the wolves, to be ripped asunder and left to the Devil’s machinations. Stray not, my children, into the full moon’s arms and beg forgiveness when the howls wake you from your blessed slumber.

Find out more about Flames of Freedom

The creepy occult horrors of Flames of Freedom 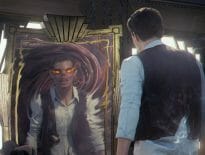 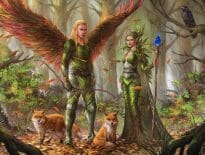