Basic World Building uses the tools from 1981’s Basic Dungeons & Dragons and Expert D&D and re-imagined in Old School Essentials to build a starting campaign setting. Even though it is based on Basic D&D, it could be used with other D&D rules or fantasy RPGs.

The first step in designing a dungeon is picking a setting, in this case a ruined palace. The second step is to choose monsters. The module covers this well enough, with just a few changes needed to kick off the adventure. Next is map the dungeon. The maps in the module Palace of the Silver Princess will be used for this step. The last step of stock the dungeon follows in some detail for the first four rooms of the Palace.

A magical catastrophe has ruined the Palace of the Silver Princess Argenta and surrounded it with an impenetrable ruby red wall of force. In the module, the fey Protectors recruit the PCs to save the Princess. I’m going to instead make the PCs find a Barrier Knight (detailed in my first column on world building) who can tell them how to get through the wall of force.

Barrier Knights are an ancient order of warriors sworn to protect the Princess’s kingdom, but they are rare now. One of these knights, now a beggar named Eddison Leadam, may be found by PCs exploring the town. Once he is found, the PCs will learn how to get past the ruby barrier around the Palace.

Eddison Leadam has a plan to get past the ruby wall of force. He knows the ruby wall of force is a bronze golem transformed into the barrier. The presence of a Barrier Captain testing its defenses or Barrier Knights trying to cut their way through the wall of force will cause it to transform back to its golem form. He plans to fight it before it can transform back into a wall. The PCs can then sneak by during the conflict. Eddison is not likely to survive this conflict, but he won’t tell the PCs that.

Barrier Knights are optional for any PCs willing to swear the oath to stand for justice and defend the weak. Before that, though, Eddison must show them the mystical flame of the order. It is hidden in his hovel, burning like a simple warming brazier. A PC wanting training must thrust his or her hand into the flame and repeat the oath the flame whispers. PCs that follow Law will be accepted and marked with a mystical flame tattoo. Neutral PCs will be burned for 2d3 points of damage and PCs of Chaos burned for 2d6 points of damage. Both alignments will be rejected.

PC Barrier Knights or Eddison cutting through the ruby wall will see a stagnant moat with a drawbridge down leading across to a portcullis. Eddison will trail behind as they cross under the gate. When the ruby wall reforms into a bronze golem, Eddison drops the portcullis and then will move to engage, urging the PCs to move into the Palace while he leads the golem away. The bronze golem is far beyond the PCs abilities which should be clear based on its size and the fire it commands.

The PCs find themselves in room 1 of the Palace of the Silver Princess. There are doors on the east and west wall and two lowered portcullis on the south wall. Faded and torn tapestries on the walls depict a green and growing valley surrounding the town of Terminus. A careful search reveals scratch marks on the floor in front of the secret door, no roll to find required.

Entrance to the Palace of the Silver Princess

Room 2 contains 3 skeletons, 2 armed with swords and 1 with a crossbow, as well as a giant rat lurking in a hole in the wall. A cleric can attempt to turn the skeletons, but his companions will have to dispatch the rat. The skeletons wear tattered surcoats with the silver dragon symbol of the Princess on them. On the south wall of the room is a lever with two positions: up or down. The lever is pushed down and is marked with an X. The up position is marked P. This lever interacts with the lever in room 3.

Room 3 is home to four more skeletons of the Princess’s guard. They lie partially crushed beneath the lever in the center of the south wall and are not undead. The ceiling right above the lever over the skeletons has become unstable and will fall and inflict 1d10 damage (save versus petrification to avoid) on anyone approaching the lever. Due to the magical effects of the wall of force, the collapse returns to a whole ceiling in ten minutes. Standing on either side of the wall and reaching for the lever will not cause the ceiling to collapse. The lever has two positions: up or down. The lever is pushed down and is marked with an X. The up position is marked S. This lever interacts with the lever in room 2 as detailed next.

If both levers are pushed up (SP for Silver Princess), both of the portcullises in the southern wall of room 1 open. If either lever is pushed up and then pushed back down, a trap is triggered. On a roll of 10 or better on a d20 a dart hidden in the wall shoots out, hitting the lever pulling character for ld4 points of damage.

Room 4 is a small, square room set up as an emergency armory. Inside the secret room are two complete kits for warriors and two bunk beds. Each kit contains a suit of chainmail, a shield emblazoned with a silver dragon, a sword, a crossbow, and 20 quarrels (crossbow bolts) in a quiver. With the secret door shut, a full day of healing can be safely completed here.

Once the portcullises in room 1 are open, the rest of the dungeon can be run as written. Because the PCs are likely not collecting loot as they go, the GM should award the PCs 1500 XP once they have explored around 40 rooms. When the Princess is released, the can earn another 1500 XP from the 3000 gp she awards each PC (with the other 1500 XP already having been awarded).

When the PCs clear the Palace of the Silver Princess and free the Princess herself, those that survive will be second to the third level. Eddison cannot be found after the PCs emerge victorious, and his fate remains a mystery for now. Ellis, another Barrier Captain the PCs freed from the Palace, will stay and look after the town and surrounding lands of Terminus. A large feast will be held, the PCs will receive medals of bravery, and the valley will be saved. The PCs will be ready to move from Basic D&D into the wilderness exploration of Expert D&D. Creating a wilderness setting will be covered in next month’s column. 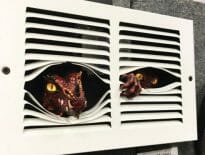 Art Eek! The cute horror of the vent dragons 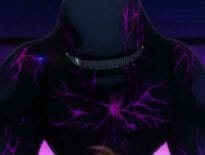