Drinking Horn Games as a Kickstarter pitch video for Terrors and Tommyguns that doesn’t take itself too seriously but as with all cosmic horror games, it’s not likely to always be fun and games for the hardboiled player characters.

The probation era game set in the fictional American city of New Babylon has players as members of a secret supernatural society, The Collective, who take on supernatural detective chores and more mundane wet work. The mythos of monsters that await them aren’t based in Lovecraft’s creations, thus avoid all that baggage and are an all-new collection from designers Nick Porter and Dominic De Dounni. The campaign has just launched and you can monitor progress here.

A pledge of $19 (about £15) will get you the PDF and all stretch goals, as well as your name in the credits. The hardback, which will ship worldwide, takes a pledge of $49. Both are expected for March 2022.

Drinking Horn Games’ have already made themselves known for their previous work Sagas of Midgard, which has a perfect 5/5 review rating on DriveThruRPG and is available as a bundle deal with Terrors and Tommyguns at other pledge levels.

The city never sleeps, though a lot of folks wish it would. Beyond the din and clatter of mundane city life, something sinister lurks beneath New Babylon. Cultists gather in the night, seeking to summon the Old Gods. Crime bosses summon dark powers and seek to solidify their power as brave men and women stand against them, betting their sanity on keeping the city, and the world, safe for one more day. Above it all, a strange Collective looms, policing all matters Occult, and keeping the dark forces hidden from the world at large– but even their motives, and methods, are dangerous and ultimately unknown.

The illustration team is back for Terrors and Tommyguns as well. In this post Drinking Horn Games showcases some of the work of James Cornell and Leah Porter, as well as cover artist Roger Creus Dorico.

The plan is to reveal more art on this page as the Kickstarter develops, so it might be worth checking out and revisiting if you’re not sure if there’s any more room for dames and damnation in your life. 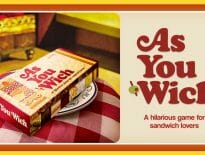 Tabletop & RPGs Tomfoolery Picnic: A review of As You ‘Wich… 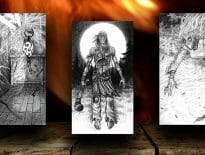