The upcoming Tasha’s Cauldron of Everything is a new D&D book that will offer optional rules for changing how racial modifiers work in the game. The goal is to get away from racial or colonial stereotypes. Orcs aren’t always dumb.

Today, though, the latest campaign setting and adventure Icewind Dale: Rim of the Frostmaiden was published and with it Wizards of the Coast updated the official D&D Adventurers League rules.

For free, you can download the latest Player’s Guide (PDF) for the Adventurers League from the organised play portal on the D&D site. It includes a single page appendix about race rules in Dungeons & Dragons.

The new Adventurers League campaign is called Plague of Ancients, and it is valid from September 15th.

Customizing Your Origin in D&D

Appendix 1 is called customizing your origin in D&D and begins with this text;

At 1st level, you choose various aspects of your character, including ability scores, race, class, and background. Together these elements help paint a picture of your character’s origin and give you the ability to create many different types of characters. Despite that versatility, a typical character race in D&D includes little or no choice—a lack that can make it difficult to realize certain character concepts. The following subsections address that lack by adding choice to your character’s race, allowing you to customize your ability scores, languages, and certain proficiencies to fit the origin you have in mind for your character. Character race in the game represents your character’s fantasy species, combined with certain cultural assumptions. The following options step outside those assumptions to pave the way for truly unique characters.

The rules then go on to say that racial modifiers are only really intended to apply to typical adventurers of each race and you can change them if you want. The guide does use the word “race”.

Some races and subraces grant skill, weapon, or tool proficiencies. These proficiencies are usually cultural, but your character might not have any connection to the culture in question or might have pursued different training. You can replace each of those proficiencies with a different one, as shown on the Proficiency Swaps table.

To see that table and access the September 15th update of the D&D AL players guide download the PDF from Wizards.com.

When will this be available in D&D Beyond? 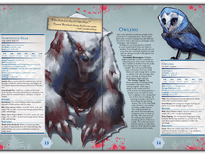