You are here: Home / Games / Tabletop & RPGs / Dark D&D: A review of The Lost Citadel

The Lost Citadel is currently available in PDF. We’ll get back to the Kickstarter later on, but the digital download has been available since May, and once lockdown logistics improve, there will be physical copies available.

Pick up a favourite D&D campaign setting, corrupt the magic, kill almost everybody off, resurrect their corpses as angry undead and place those scant few who survive in a single dwarven fortress.

That’s the basic concept to The Lost Citadel.

Obviously, the surviving human rebel against their saviours, overthrow the dwarves and force them into slavery. What else do you think we’d do?

The elves? Oh, gone mad. The shattering of magic was enough to shatter their minds.

Food? Supplies? That’s all outside the fortress with the hordes of flesh-hungry undead.

The Cost Citadel is a campaign setting for 5e. Most fantasy settings for 5e tend to go the same route; relatively high fantasy (fireballs, quests, monsters) and they tend to add to the races and classes available.

In fact, it’s pretty common to see new campaign settings for Dungeons & Dragons selling themselves to you by counting off the number of new character options they make available.

In this post-magical apocalypse setting; the dial turns the other way. There are fewer options. There are different options.

The step towards lower fantasy might not suit everyone. Really want to play a gnome? No such thing. A druid? No such thing. The decision to play The Lost Citadel will have to be a group decision and yet to get the most value from the setting then the DM will have to a bit cagey about some of the details. Details like “what actually happened?” and “just how messed up is magic?”

The bleakness of The Cost Citadel might appeal to everyone, especially not people who fancy saving the princess or destroying the necromancer’s cursed magic ring. Successes in The Lost Citadel are much lower key; like finding a relatively safe way to get out from the fortress and forage in a place likely to have some food. You might even get a spell cast without corrupting an area with dark magic.

The inequality of the dark D&D future might attract and put off players in equal measure. If you’re playing a dwarf, then you’re probably playing a slave. Green Ronin, the publishers, want to make sure you know that and are okay with that. Consensual slavery, if you will.

In fairness, that balance between being dark and being responsible is a line that the design team have worked hard to get right. It’s just that you feel the hard work, at times, you can sense the struggle. Especially with the slavery, less so with the face-eating corpse monsters, but I guess D&D players are more used to dealing with the latter in escapism.

I liked the darkness in The Lost Citadel. I adored the pitch, and that’s why I jumped on the Kickstarter and went big on it.

I love the mystery implicit in the setting. What caused this undead apocalypse, and is there any hope for the survivors?

Mystery, more than anything, is the biggest issue that The Lost Citadel wrestles with.

My initial read-through of the download was frustrating. I just wanted to know what happened! Instead, I got one view of the history of the world and how a deity known as the Bone Father got annoyed and put his foot down. I did not trust the narrator. I wanted to know what actually happened.

What happened, why it happened and what happens next, are less important than what it means for Right Now. It’s the here and now, a few generations of survivors in, with the undead still strong outside, that The Lost Citadel focuses on and the first four-fifths of the book can safely be given to players to read all about it.

I’m not saying The Lost Citadel doesn’t answer those questions. It has answers, but they’re more like pegs to hang a larger plot on if you want to take your campaign in that direction.

Character options in The Lost Citadel

The Lost Citadel is not low fantasy, but it is lower fantasy than The Forgotten Realms, and the full suite of D&D options is not available. I suspect this will be crucial for some gaming groups.

Here are the “races” you can play in The Lost Citadel

Those human cultures all squeezed into the same living space does an excellent job at whisking up conflict and options in equal number.

Here are the available classes, if it looks familiar, it’s probably been heavily modified.

As far as I’m concerned, this is a long and liberal list of possibilities. Yes, someone’s favourite D&D class might not be there but given that we’re reduced to a single fortress of survivors, is that unlikely? I don’t think so.

I think, instead, the writing team have worked hard to create plenty of variety.

I’ve not counted the pages, but it feels as if the Life in Redoubt and associated The Last City chapters make up the bulk of the book.

Redoubt is the name of the fortress, of The Lost Citadel, in which the mortal survivors of the undead induced end of the world huddle together.

What you’ll find here are the details for GMs and gaming groups that get into the details of surviving in a long-term and magically flawed siege. That’s to say, the survivors in Redoubt can get outside, can smuggle in dribs and drabs of food and that the blockade might, therefore, go on for generations.

It’s here you’ll find information on topics like food (and that’s pretty rare in D&D supplements, in hindsight, on jobs and the guilds and the currency system that the RPG uses.

You’ll find careful rules on slavery, the black market and on what passes for entertainment.

What do you think happens to people who die inside the fortress at the end of the world? This is a fortress that is the last bulwark against the undead swarm. People are careful to dispose of the bodies, of course, to render them down to harmless parts.

We look at the very many factions that make up the city. In some games, these are background dressing. Does it matter if the Tribes of Two Moons or the Cults of Idolatry are annoyed that you found a way through the Fissures and got outside? Not really, in a game like that, what matters is that some group within Redoubt is being a pain.

In other games, the politics of the world is the world. It matters if you have a contact in The House of Mercy, and are wooing The Forerunners while betraying The Crown of Blood.

The Lost Citadel works hard to turn these dozen or so groups into living and breathing entities and to do so without turning a 300-page book into a 600-page one. Whether or not you appreciate the effort is less clear and I suspect this is a slow-burning gift. The more you play The Lost Citadel, the more you’ll thank the authors for taking the time and the space for this section.

In other words, on your first blush through the book, you might prefer more pictures of undead monsters and less long term plot seeds. Resist that.

The Lost Citadel does not skimp on pictures of undead monsters. I would be disappointed if it did.

Yes, D&D 5e has some undead. The Lost Citadel generously adds to that weighty dish.

I think the most helpful thing this review can do is to be sure to include plenty of illustrations of the terrors that stalk the end of this fantasy world.

However, it’s also worth pointing out that there are tiers of monsters in The Lost Citadel. The monsters that most are familiar with are brainless, aggressive and driven only to feed.

It’s only later on in your adventures that players might discover that some of the undead are intelligent. They are generals and strategists in the horde. I’m not entirely sure why they haven’t crushed the survivors yet. Still, perhaps that’s an opportunity for DMs to dig into and maybe that’s because the most powerful of the undead beasts are only newly manifested.

There’s plenty of excellent illustrations in The Lost Citadel. I wish it had more. I wish it had one on every other page because I think it’s a setting that needs to work incredibly hard to push back against the fantasy tropes.

In most fantasy games, controversially, heroes are low-level superheroes. They can fling fireballs, they challenge the odds and represent hope. If The Lost Citadel is a horror game, then that fantasy set up isn’t appropriate.

This RPG uses words, building out the fortress of Redoubt, to push back against the standard fantasy setting. But it could have used pictures. Illustrations, though, are more expensive.

I said I went big on the Kickstarter. I backed the print. This review is of the PDF, but just in the last day or so, Green Ronin has been able to show pictures of the paper product as the books finally begin to beat the COVID-19 lockdown and start to move. As I expected, the paper product looks so much better. This is an unholy tome you can take to bed.

Magic is the pivotal element in the look and feel. Magic is what takes that low-level superhero aspect away and puts it on the high shelf. It’s not gone entirely, it’s just not The Forgotten Realms.

If you want to play a magic-user at the end of the world, you can. It’ll just be a different experience and isn’t that why you’d be interested in The Lost Citadel after all.

Crucially, The Lost Citadel isn’t a straight-up apocalyptic horror game. As noted, that’s hard to do in D&D fantasy. The Lost Citadel is actually a story about one cycle ending and a new one beginning. There is horror in Redoubt, but there’s also hope. In this RPG, the PCs can make a difference, people can be saved.

The production of The Lost Citadel has entirely come off the rails. You can honestly be forgiven for forgetting that you had ever backed it. It’s that late.

The irony of a global pandemic is one of the delaying factors is not lost on me.

I like the PDF. It’s novel, and it gives D&D 5e life through unlife. It’s not quite the game I splashed out on in Kickstarter, but I’m confident that game is (slowly) making its way towards me.

I would play the game. I’d think carefully about whether I had the time to DM it. I’m really looking forward to my hardback.

You can buy a digital version of The Lost Citadel from DriveThruRPG.

Dark D&D: A review of The Lost Citadel 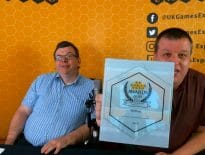 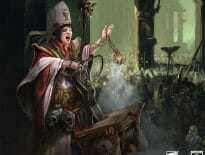