2020 has been a learning experience for conventions with physical events cancelled, leaving mere months to discover an online format that works. I think Virtually Expo did well. The convention didn’t feel as vast as the offline event, but I liked the use of the website as the central pillar, the use of virtual badges to encourage engagement and the event schedule system made it easy enough to plan your weekend.

Introduced in 2007, the UK Games Expo Awards were not derailed by the lockdown, and simply became part of the virtual gathering. Twitch was used to broadcast the event, with the Virtually Expo website homepage embedding the live video feed. 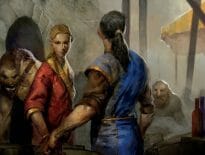