You are here: Home / Games / Tabletop & RPGs / Nightfell to bring grimdark horror to D&D and make it look good

Nightfell is a D&D 5e campaign setting from Italian author and illustrator Angelo Peluso. It’s a world in which the undead have risen and eternal beings, doomed to exist forever, crave the end of reality.

The sun is dead, but the moon still glows, and the world struggles on in the darkness. Peluso asked for €10,000 to fund this book and, with 20 days at the time of writing, has raised €80,000. You can check out the details at the campaign page.

Angelo has teamed up with the Mana Project Studio to make this game happen. That’s reassuring as it means they have support, but also because Mana’s previous projects like Historia and Journey to Ragnarok have looked great.

In Nightfell, PCs are night explorers, they are adventurers who are coping, just about, with the Lunar Age and where life only endures thanks to the last Primordial beings.

A pledge of €24 (about £22) will get you the Nightfell Corebook and Bestiary in PDFs.

Step up to €55, and you’ll get the hardback of Nightfell also. The retail price for that bundle would typically be €70, and so that’s a steep discount.

The Kickstarter describes the Nightfell Quickstart as a free download.

Actually, the Nightfell Quickstart is a pay-what-you-want with a suggested price of £4.

Mismatches like this always give Geek Native some trouble as the blog likes to encourage gamers not to take pay-what-you-want as a synonym for free. In this case, though, if you’re strongly leaning towards backing the project and just want to see a little more of it, then I suspect a free download of the Quickstart would be fine.

Pledges can go higher. €98 (about £88) gets all the books in hardback as well as a GM screen, with tiers beyond even that. 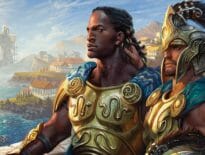 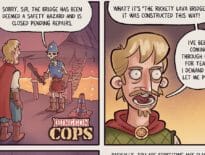 Comics Comic: Dungeon Cops
💰 Copper Coins 💰 Geek Native is an affiliate and may earn commission on purchases you make from third-party sites.
🍪 Privacy & Cookies 🍪 The site uses cookies to survive. By accessing the site, you agree to use your browser to control cookie use or take 1d4-3 privacy damage (tracking). If you defeat cookies via ad blocking, please consider the Patreon. An intro to cookies, and how to control them, can be found here. I Manage Cookies