You are here: Home / Games / Tabletop & RPGs / Jim Henson’s Labyrinth: The Adventure Game is out

It feels like a lifetime ago but it was only November when we had a good sneak peek at the RPG based on Labyrinth.

Published by River Horse and written by Ben Milton (aka Questing Beast) the game comes with two custom dice and a full-length adventure with over 100 scenes.

Jim Henson’s Labyrinth’s game has its own streamlined rule system, perhaps there for Labyrinth fans who aren’t roleplayers (yet) but can also be used by ‘expert’ roleplayers using whichever system they prefer.

The bulk of the book is the adventure, and in it, one player takes on the role of the Goblin King while the others pick characters.

Ben Milton’s own popular YouTube channel, unsurprisingly, has the best preview of the game so far.

Artists featured in the game include Labyrinth stalwarts such as Ralph Horsley, Johnny Fraser-Allen and Brian Froud.

Jim Henson’s Labyrinth: The Adventure Game is out 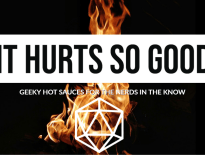