I first reported on the forthcoming Dune RPG back in 2018. Cloud Force 9 has the license, has already taken advantage of it for Dune board games and wasted no time in appointing Modiphius in charge of getting the tabletop roleplaying game created.

We don’t yet have a release date for the game, and Modiphius won’t say whether the book will tie in with the new movie that’s on the way (although that would certainly be one reason for the wait). The wait hasn’t dampened enthusiasm for the project, though, and the Dune RPG came top in EN World’s most anticipated RPGs of 2020 poll.

Yesterday, Charlie Hall over at Polygon reported the first few details about the game and confirmed it will be using Modiphius’ 2d20 system.

It’s no surprise to discover that the Major Houses of the Landsraad, such as Harkonnen and Atreides, will be there for characters to be members of. However, players can create their own House too.

While the byzantine politics of the Great Houses contain more than enough potential adventure,”

The gameplay will cover all manner of agents, spies, mercenaries, and even criminals that serve the agenda of your House.”

There’s not too much to say about the game. However, Hall noted the large team of creators on the project and rightly praised the diversity.

One of the writers is Khaldoun Khelil, an Arab-American of Palestinian descent (who has worked in counterintelligence and written for Vampire: The Masquerade). Khelil pointed out some of the issues Dune tackles in its own way, saying;

In Dune, the Spice takes the place of oil and the Fremen represent the exploited population that sits upon that resource that has to be managed by the exploitative class and colonizers, as represented by the Great Houses that all have very European names and cultural markers in the original books,”

Herbert was also very concerned with the environment, and his focus on water and the desert as a living place has a special place in my heart as I’m half Algerian and I have spent a lot of time in the Sahara desert with my family. Herbert was a great writer and these elements are not slapped in the readers’ face, but they are there and in some ways we see the story of Dune playing out today.”

Harlem Unbound and Haunted West’s Chris Spivey is also working on the project and taking a proactive approach in improving the diversity of the setting. Chris told Polygon;

The books themselves were very white-cis-male-focused. I wanted to attempt to expand that world, bringing different marginalized groups to the front. My goal was to show the history of humanity is vast and inclusive, and to explore the struggle as one where we must all work together to succeed.”

It’s assumed that this mighty team aren’t writing in committee or as a space-faring hive mind, but each has individual assignments (adventures, equipment, etc.) to rule over.

Are you looking forward to the Dune RPG? The film is due out at the end of the year so do you think we’ll get the roleplaying game at about the same time? 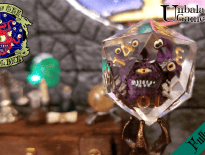 Geek Stuff A Beholder trapped in a dice… it’s the… 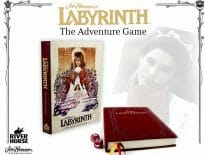 Tabletop & RPGs Jim Henson’s Labyrinth: The Adventure Game i…
wpDiscuzComment Author Info
Manage Cookie Consent
This site uses cookies 🍪, and links are ads that may earn bloggers some money 💰, and with this alert, I very much hope that these dark truths 🧌 are acknowledged.
Manage options Manage services Manage vendors Read more about these purposes
Preferences
{title} {title} {title}
Loading Comments...