You are here: Home / Games / Tabletop & RPGs / Hellish weaponry: Shane Hensley chats about the weird west and The Sixth Gun

Oni Press and Pinnacle Entertainment Group are running a Kickstarter for The Sixth Gun. It’s a weird west RPG based on the comic book The Six Gun. You can check out the pitch video below, the campaign page here and our Q&A with PEG’s Shane Hensley, Scott Woodard, and Cullen Bunn by scrolling down.

Can you quickly describe Savage Worlds for fans of The Sixth Gun who might be new to roleplaying and the rules?

Sure can! It’s designed from the ground up to be super easy for the Game Master to run, from the way adventures are structured to the rules themselves. Common bad guys are up, down, or or off the table–we only track other wound states for the big bads.

Dice-wise, it uses all the regular dice, and rates your character in skills and attributes from a d4 up. Dice explode, so bigger is better and produce other special effects like extra damage or results depending on what you’re doing.

The rest of your abilities come through special abilities called Edges that give you bonus, let you break the rules in some way, or give you other advantages.

Can you describe The Sixth Gun for gamers who’ve yet to encounter the project?

It’s the story of six legendary weapons that have existed from near the beginning of time and have the ability to warp (maybe even “reset”) reality. In the actual story, they’ve taken the form of six guns that our heroes–and a passel of incredibly cool and unique villains–are after.

Why do you think the two make such a good match?

I assume you mean Deadlands and The Sixth Gun. It’s kind of like Lord of the Rings and Dungeons and Dragons. There are lots of differences, but lots of GREAT ways they cross over and can be used together. A Deadlands player can bring in the monsters, relics, and villains of the Sixth Gun into his campaign, and vice-versa.

Why do you think the Weird West attracts such loyal and imaginative fans?

I think that–at least fictionally–it’s a great time for heroes and villains. In a Western–whether it’s actually in the West, in space, feudal Japan, etc–the hero is more or less on his own. Help may be days away, if not weeks. There are hostile enemies, creatures, and weather all out to get him. If you can survive all that, you’re at least a bad ass. Those who do the right thing despite all this adversity is an actual hero.

Will we get stats for key characters from the series? Will they be playable?

You do, and you could play them if you wanted! I think most will want to create their own characters, but they’re there so it’s YOUR decision.

How can gamers experience the world of The Sixth Gun without straying from the comic book canon? For example, should the Third Gun change hands? Should a key baddie die or are they unkillable?

The tales we’re telling cross and intersect the main story of The Sixth Gun, so it’s really up to the Game Master. His party could cross paths with Drake, Becky, and Billjohn as they battle General Hume; or he could have the party come upon the guns all on their own and tell their own story.

At the current rate you may exceed your $48,000 stretch goal target? Any plans on stretch goals after that? Any clues for us as to what they may be?

We do indeed! We planned it out before the Kickstarter began and will be able to give our backers a special bonus for the materials we’re already delivering. Probably all I can say right now without getting in trouble though…

Where would you like to see the world of The Sixth Gun go next?

Cullen, Brian, and Scott are all hot to do more material for the world of The Sixth Gun, so for this project, I’m actually excited to sit back and enjoy it just like the rest of you–as a fan. Those guys are amazingly creative and I’m thrilled to be a part of it, and for once sit back and let someone else create a Weird West I want to play in!

Hellish weaponry: Shane Hensley chats about the weird west and The Sixth Gun

time to read: 3 min
Music Short film: The Curse of the Sad Mummy 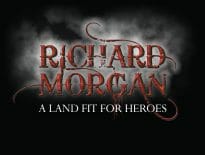