You are here: Home / Movies / Valiant gives us a second Bloodshot trailer

Okay, I prefer the Bird of Prey trailers, but Bloodshot is a superhero that’s neither Marvel or DC. He’s not even Hellboy!

So? I’m interested in the film both academically and emotionally. I think, though, to enjoy it I’ll have to engage the no-brain-action-movie part of me. Don’t worry. It’s easy.

Vin Diesel is Bloodshot, and Guy Pearce steals his chunk of the trailer easily.

We won’t have to wait long for Bloodshot. It’s out in the UK on the 21st of February… or it was. The movie was delayed in the US. Interestingly, UK media still thinks it’ll air here in February. Cineworld says 26th, for example.

If that’s true, then it’ll be a few weeks later, on the 13th of March when the movie hits American cinema screens. 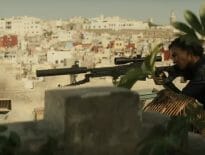 Movies Who the hell is that guy? Black Widow’s seco…