Geek Native has been tracking Lex Arcana since a very impressive preview came out last year.

In that time, the project has gone to Kickstarter, done very well but then become a little delayed. Lex Arcana has become an example of how showing progress and being frequent with communications help manage timetabling challenges. You’ll see in the interview below that the new schedule has PDFs delivered before the end of the year but after the insanely huge Lucca.

One of the early heroes of the game has been the artwork. Just tour through Geek Native’s archive of Lex Arcana posts and you’ll see some cracking art. There’s more in this post, art that’s not been seen before.

Geek Native had the chance to catch up with Francesca Garello, an archaeologist and author who works on the game, Mauro Longo, a game designer and writer as well as Valerio Ferzi, the COO of Quality Games to talk about Lex Arcana.

It is not just the release schedule we touch on here. We chat about whether it is possible to play in this alternate reality version of the Roman Empire if your knowledge of the real world Roman Empire is a bit shakey.

Can you describe Lex Arcana for people who might be reading about it for the first time?

Mauro: Lex Arcana is a role-playing game in which players wear the clothes and armor of the Custodes (“Warden”) of the Cohors Auxiliaria Arcana, the most exclusive elite force of the whole Roman Empire. Among them are fighters, scholars, augurs, diplomats, explorers and assassins, and all these Custodes are sent in any corner of the Empire to face deadly risks and supernatural enemies.

Valerio: Lex Arcana is also the role-playing game that probably had the most success in Italy, after DnD, of course. At the time of the first edition in the 1990s, it was even sold in tobacconist (that in Italy can be considered widespread as the newsagent’s shop) something not usual in Italy for this type of products.

You’ve already shared a generous preview of Lex Arcana. What have people’s reactions been like?

Mauro: I guess the feedback was very high. The best sentence about the whole project, in my opinion, came by The Curator reviewers: “Lex Arcana is not just ‘playing in Rome’, but it’s actually made by people in Italy, so if they don’t know what are talking about, I don’t know who does, right?”

Valerio: Exactly! I remember a backer making a negative comment about one of our artworks saying that in ancient Rome there were no fire-breathing lions. Actually, our illustrator had portrayed a Chimera, a famous mythological monster with a fire-breathing lion’s head.

Actually, Roman mythology is literally full of monsters that can be assimilated in what can be found in a fantasy setting. And with our artworks, we have tried to make people understand this: ancient Rome was a dark, dangerous and hostile world more that the one described, for instance, in the sword and sandals 60s movies.

Do you have a sense that the roleplaying games scene in Italy is similar to elsewhere in the world or are the differences?

Mauro: We absolutely have a strong influence from the US, British and North Europe scenes, before any other context, so the game we play most are from those countries or similar to them. In decades, I have noticed we in Italy are players a lot more “narrativistic” and actor-like than US gamers. Usually, our scenarios and sessions are “fuzzy”, very few railroaded. Italian players can spend the whole game session in the Inn drinking and chatting with strangers more than go adventuring… Like Italians do…

Valerio: Or like the ancient Romans, lying on their tricliniums

What’s been the biggest challenge in getting the game made?

Mauro: We had a huge, unexpected success with the crowdfunding campaign. We planned to publish as a first release 1-2 books, then we found ourselves (happily) trapped with 4 different important publications. So, the problem is now to finish everything in time (or with just an acceptable late).

Francesca: For me the hardest thing was finding the right balance between history and fantasy. Many Lex Arcana enthusiasts are also Roman history lovers, so they expect a certain degree of “reality” in the setting. But of course this is an alternate world, so it’s impossible and perhaps illogical to reproduce all the aspects of “real” Rome. So the challenge was: how far can we get from the original model and still be recognizable as “Ancient Rome”? It wasn’t an easy choice.

Do you have a release schedule for Lex Arcana?

Valerio: Yes, we plan to deliver all the PDFs for the end of the year through our pledge manager, doing it progressively, ideally starting after Lucca Comics and Games 2019.

While for the printed part we foresee indicatively the beginning of the year, the end of January or the beginning of February, certain dates will be communicated as soon as we have feedback from all the partners we are working with.

What’s your favourite piece of art from the game?

Mauro: We have a lot of wonderful art, sometimes really astonishing. We decided to have a great artist also for maps and plants, so Francesco Mattioli joined the team. I can’t stop looking at his maps!

Valerio: As far as I’m concerned this is like asking a dad which child he prefers. In addition to the pre-gens by Antonio De Luca and his team, I also take pictures of Alessandro Manzella for the volume on Egypt: his pictorial style is quite distant from the classic style that is expected on an Egyptian monograph, I think it will be interesting get the feedback from the backers.

What’s the tone of the game? Supernatural horror like a Roman X-Files or does it feel more like a Special Forces military game? Something else?

Mauro: The default version of the game feeling should be “righteous Roman praetorians send as a proud task force against mythical monsters or prophecies, for the glory of Rome” but every time we play, according to our personal mood and inclination, we add elements and flavours: I like to insert “pulp and weird situations”, ironic quotes and apocalyptical enemies.

Other friends add more historical based characters and situations, other players add horror elements, dark fantasy mood and conspiracies among the Romans itself… As usual, the RPG as written is free to manipulate to create the adventures everyone wants…

Valerio: As Demiurge (the game master of Lex Arcana) I preferred to write about adventures or campaigns that would focus on the journey: the Roman Empire was enormous, you could go from the desert to the steppe or to very Norse environments easily. It wasn’t bad. Politics, betrayals and secret sects were my favorite sidewalk, during these long campaigns.

Francesca: Adventures in Lex Arcana can be quite different one from another: sometimes the stories are humorous, sometimes more serious and “dark”, some show a horror touch, others involve some fighting and sometimes the better strategy is just run. What I particularly enjoy is that all of them require a great deal of investigation. This alternate Roman world is deceiving, things are not what they seem, characters have to be watchful and intelligent.

Do you need a good knowledge of Roman history to get the most from the game?

Mauro: This was a strategical decision we took before the 2nd edition will be announced. The answer is “No!” We decided to see the whole Roman setting not as a historical period, but as a “narrative genre”.

A non-American person can watch western movies or playing role-playing set in the “far west” (and having fun) also without knowing the history, geography and facts related to the U.S. XIX century. Using the same point of view, you can refer to the “Roman world” as a genre and not a series of precise historical notions. This way, those who want to go deep in Roman chronicles and society can add details at will, without the game and the adventures break.

On the other hand, those who want to approach Lex Arcana on a more superficial way can do so easily: the handbooks and the adventures already contain all the needed information (few) to play the game. After all, we have chosen from the beginning an alternative history with a point of divergence much earlier in time to the present of the setting, to allow players and Demiurges to be free to recreate every time their “own” Endless Empire.

What three tips would you give a new Lex Arcana GM to help them craft a better experience for their players?

Mauro: Choose some historical character, iconic movie, mythical monster or famous location you like, and use it in your adventure. I did a whole adventure based on From Dusk till Dawn, and turned everything in a “Classical” menace, setting the adventure in Cadiz, a city renown for its prehistorical temple to a god of death, its dancers and the Atlantic sailors who dock there.

Valerio: I know it’s a stupid advice, but … use the net: the internet is full of resources that once did not exist, and this surely brings us closer to the use of notions once maybe more difficult.

An example? vici.org, the Archaeological Atlas of Antiquity, a huge, enormous database of ideas and hooks to write your adventure.

What three tips would you give a player joining a Lex Arcana game for the first time?

Mauro: In this game, roles are very simple to perform: fighters, explorers, assassins, investigators, augurs and sages… You are part of a task force sent by the Emperor, and you will face misteries and weird menaces. Just choose a hero and try to think in a “classical way” and everything should be fine.

Francesca: Don’t be intimidated by the setting. Yes, it’s Ancient Rome, but it’s not about solemn characters delivering sermons in Latin. Ancient Roman historians themselves loved to mix history and legend, reality and magic. I think that GMs -or “Demiurges” as they’re called in the game – have the same role of those ancient narrators. They should feel free of mixing historical reality and invention to provoke a sense of wonder and to make us -readers and players- wishing to take part in a great adventure.

What does the roadmap for Lex Arcana look like? What’s going to be published next.

Valerio: The basic idea is to produce a sort of Lex Arcana “Wave 2”: during October the authors will start to write a small set of new volumes to be ready after summer 2020.

For the kind of sourcebook, we would like to continue with the ‘geographic’ type sourcebooks, of which Aegyptus is the first of the series: it is the best way, in our opinion, to show how vast and powerful Lex Arcana is it as RPG.

Where do I go to buy the “first wave” of print products?

You might find someone who can tell you over at the Lex Arcana fan Facebook group. https://www.facebook.com/groups/LexArcanaFan/ I’ve not had any update from the publisher. 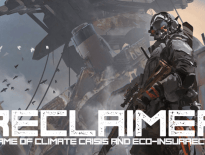 Tabletop & RPGs Reclaimer: A game of climate crisis and eco-insurr… 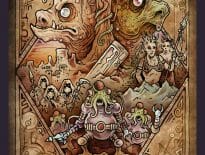