Two weeks ago Evil Hat put the brakes on their plans for the RPG Agon. Why? union-busting rumours about Kickstarter and their management worried the company.

Today, Agon launched on Kickstarter, and it looks great. So let’s first check out the campaign and then come back to what Evil Hat has decided about the crowdfunding platform.

I love the art. That’s by John Harper, who also did game design, writing, layout and graphic design. It was Ryan Dunleavy who did the animation for the video’s music is by Allison Arth. Sean Nittner joins in offering game design and writing skills too, along with project management and editing.

John Harper is One Seven Design, Evil Hat’s partner for Agon, and who took an active part in the discussions around the ethics of Kickstarter. Harper may well be best known for his excellent work on the Blades in the Dark RPG.

A pledge of $10 gets you immediate access to the prototype for the game. $15 will get you that and the final PDF with art, all stretch goals and a purchase code for an at-cost print-on-demand option.

$25 will get you the hardcover of the game and everything already mentioned but Evil Hat only ship to US postal addresses.

The first edition of Agon came out in 2006 when it won runner up in the Indie RPG Awards for the most innovative game.

Agon, the new edition, sticks with the ancient fantasy world of myths and legends with all sense of historical or literary accuracy at all. Players are very much encouraged to craft their own stories.

Tempted, you can back the project on Kickstarter.

Evil Hat are crowdfunding again on Kickstarter, for now.

In a blog post, Fred Hicks and team recognise that the Union organisers at Kickstarter have not called for a boycott.

Furthermore, Evil Hat acknowledges the situation is fluid and staff at the platform continue to push the Union together, and yet Kickstarter has not recognised this. The publisher also feels they might have more influence inside Kickstarter, as a customer, rather than an ex-customer.

Are you a Kickstarter backer? Evil Hat is drawing attention to this petition that asks Kickstarter to reconsider recent decisions and apparent direction.

Will you be backing Agon and has the Kickstarter controversy influenced that decision? 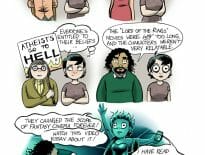 Comics Roxy on opinions and Lord of the Rings 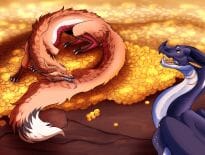