You are here: Home / Games / Tabletop & RPGs / Genre Police: This Water Is Not Window

So in the last article, we talked a lot about Surrealism, it’s closeness to gaming and some of the RPGs that best exemplify the real surreal ideology. Now I’d like to offer some techniques you might want to try to generate RPG content that might lead you in new and interesting directions as a GM. These techniques are made to generate ideas outside of your normal scope and can be really good if you feel you’re stuck in a rut with the same ideas surfacing all the time.

I have divided the techniques up into Dadaist, Surrealist and Abstract Expressionistic techniques. If you need a base understanding of those forms for the purpose of this article, I suggest you return to the first part of this article.

While the intent of Dadaism was to make an anti-art movement, some foundational techniques of later art styles began here. Here are a few we can use.

Readymades: The artist DuChamp would often simply exhibit exiting objects in galleries and rename them, remove them from context. The art was in the framing of the object as a new thing. We can easily do this as GMs without a problem. Go through an existing adventure or sourcebook and write down three rules/statblocks/moments that capture your interest. Remove that from the adventure and remember it. Wait until you’ve got to a point where you haven’t planned and try to put one of those elements into your game with a new context. For example, by the time this article has aired I have done this for a D&D game: I will have taken an encounter from Out of the Abyss and thrown it into a map from Tomb of Annihilation in order to create something different for my game – that is neither of those adventure paths.

Photomontage/Cut-Up: Photomontage is an idea of a picture made up of other pictures, media reused and cut together. Cut-up is its literary cousin, where a writer takes text and cuts it up, rearranging it to create a new, often random narrative. If we’re to believe the urban legend, the film Mars Attacks was created using a similar method – the writer simply threw a set of old alien invasion bubblegum cards in the air and wrote a story based on the order of the pictures on them as they picked them up. Take a series of pictures you like that mirror the game you want to run, print them out and place them face down. Then scramble them and turn them face up, then try to build a narrative around them. You find you bend yourself in new shapes.

Collage/Assemblage: Dadaists used to create collages and three-dimensional sculptures that included artifacts from everyday life that they considered worthy of record despite the current society placing little to no value in them. One technique we can use from this is to base an encounter or session around a physical artifact – something odd that has caught your eye or something you find particularly beautiful or weird. Base a session around it and – if you can – bring it to the session. The physical presence of an object can be really memorable for players. Personally I find children’s toys are really inspiring this way – I have had several set pieces in games take place inside children’s wooden toys and an old superhero game once had an entire villains lair built of pre-existing board games (Monopoly, Snakes and Ladders, Labyrinth & Dominoes) and a giant dancing Santa was a huge mech at one point.

Surrealist techniques are sometimes less about form and more about content, which can be useful to us as storytellers.

Exquisite Corpse: The game of exquisite corpse is a fairly common one – you draw the head of a person/creature, fold the paper over and hand it to someone else. They, unable to see the head, draw a different body and pass it on to a third person to do the feet. This could be a really fun experiment in co-GMing where one person writes a start of an adventure and runs it, then in the second session, a different GM takes over and then in the third, a new GM takes over. Or you can use it with your adventure design by seeking help from an outside influence. I often explain my session ideas to my wife when I am brainstorming – she has a different perspective and it makes me generate new ideas and twists. In many ways, I pass her the vague head of a thing, she fills in some body and then I give the thing legs as I run it.

Automatic Writing: Automatic writing is a thing that happens when you sit down at a table, take a pencil and with no ideas, just start writing. You’d be surprised how fast something just takes over. To begin with, it can be glorious nonsense but it can also spill things out you aren’t expecting. Try this a few times with no real intent. Then put them in a drawer you don’t use often. When you find them again, use them to inspire content. You need that time and distance to separate the two events and you need to be unsure of what content you are trying to make (maybe it’s an NPC’s internal dialogue, maybe a series of events, maybe worldbuilding) before you begin so as not to inform the process.

Dream Resume: A dream resume is a resume written about the accomplishments of a person in their dreams. It sounds ridiculous and strange, but it is an interesting idea. If you start a list of all the things you have accomplished in dreams, you probably have a really good set of objectives/moment for a campaign, particularly something odd like Mage or Nobilis. If you need a weird environment, you can also map a series of dream you had and see if the locations tie together, which allows for weird shifts in tone. This is especially good for games like Lacuna Part 1 or Don’t Rest Your Head but would work just as well in any dream realm.

These techniques are largely products of modern artistic design and painting so they require a little more translation to use.

Minimalism: Strip away. While a world is important to build, it’s also good to occasionally not fill a space and let the players imagine. Don’t have massive sections of read-aloud text, instead work out how you can say the same thing with four lines. If you use a published product, don’t read room descriptions, instead work out what counts in the description. Don’t have NPCs say how they feel to players, instead show it when they talk. Remember what’s left unsaid is powerful, too.

Decollage: A technique of layering different paintings on top of each other and tearing hole through canvas to see the elements underneath, creating a picture that has hidden depths that lie in contrast to its opening layer. There’s a couple of ways we can use this. The first is to layer in our design – have two stories going on, but the deeper story takes work to find. Maybe orcs are invading the northern villages but they are only doing that because they’ve been driven out by a graver threat. It is possible to stop the orcs without meeting the graver threat, though.

A second way of doing this is more experimental. Write out five campaign ideas and stick the paper to layers of cardboard. Tear holes and layers away until you have a weird assembly of all five ideas. This is your actual campaign.

Action Painting: Action painting is the form of painting used by Jackson Pollock which was about getting pain on paper according to mood. A way to convert this to play is maybe through sound, a sort of ‘Action GMing’. Have a series of musical tracks spun up on random in the background. When you are GMing, whenever the music cuts in and seems to be informing the mood, change what you are doing or inject an element inspired by the song/music. There’s an entire RPG called Ribbon Drive inspired by mixtapes that is doing something very similar to this.

That’s our new arthouse techniques to try for new improv elements. I hope you found them really fun ideas to try at a table. If anyone has any stories about using these ideas, feel free to comment and let us know how it went! Until next time, when things get a little more…real…! Just remember: This window is not water.

Genre Police: This Water Is Not Window 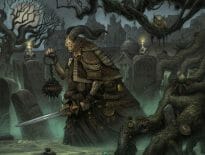 Art Gateway: The Book of Wizards by Sean Murray 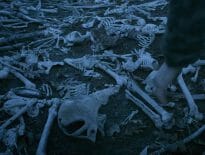