Martin Luther King breathed deeply and checked the settings on the laser, watching the mecha spider advance through the crowd. As a group of heroes fight to stop it, he realises if he’s doesn’t act soon, lives will be lost. He thinks about all the things that have lead to this moment. Hitler’s silly five-year war that brought the ‘specials’ into focus and changed the world forever. The assassination of President Truman and the election of President McCarthy. The years of fear and then, the time for peaceful resistance. This million man march, all he had worked for. But the marchers were under attack. If he pulled the trigger to save them, knows he will be seen to be taking a path of violence on national television, forsaking his principles. He also knows he can’t just let them die.

Martin swallows and makes a choice. He levels the laser at the pilot of the Mech and fires. As the construct stumbled backwards blazing, Doctor King hopes he hasn’t sacrificed the integrity of his dream.

Do you remember when the communists invaded America? What about when the Allies made a Devil’s bargain with the Nazis to halt the destruction of Europe? How about when the black plague killed 90% of the world’s western population and left the walking dead in its wake? No? That’s a shame because alternative/speculative history fiction can really allow us to dig deep on issues of our past so we can learn new lessons about how we got where we are.

There’s a lot of subgenres within Alternative History we can unpack. For the purist, there are a few hard rules about how we construct an Alt-History story. A ‘true’ version of the genre has no mystical or sci-fi elements and must not be speculative. It must pick an event in history, change that event and examine the consequences. But that definition in itself is problematic because the great-grandaddy of the Alt-History genre, Harry Turtledove, wrote an eight-novel series about Axis and Allied powers coming together in World War II to fight a horde of invading aliens and everyone seems to give him a pass. How can we avoid the pitfalls of other writers bad versions of fiction? Do we really need to?

I think the problem for us as gamemasters is that our audience for this genre is going to be a very specific type. Anyone who signs up for a game based in a specific alternative Earth time period is 75% likely to have an interest in that time period. It can lead to groups where a player is far more educated than the GM about the setting. Therefore, I think it’s important to hit a big divergent point early and to go as bizarre as possible.

What, you were expecting advice about being heavily researched and calm, collected logical charts? Skip to the advice section, this party is not for you.

Still here? Ok. What we need to bear in mind whenever we play an RPG is, that no matter how seriously to take your game, genre or the subject of RPG’s in general, you aren’t writing the next great American novel. You’re playing an RPG with your friends. You need to be able to make setting calls for yourself about this new history you are forging and you need to establish the far point of variation. If you want to have aliens invade Gettysburg or the Crimean War result in a zombie outbreak or have the British miner’s strikes lead to a communist uprising, just go for it. After you’ve made this mad leap, then explore the fallout within the newly establish laws of the universe you just created (so now aliens exist or zombies are a thing). THEN start worrying about if things make sense within the canon of history.

I know, I know, so far my advice on this Genre police article is ‘don’t worry about genre conventions’ and you’re screaming at me that this is counter-intuitive. But bear with me. It’s not always necessary to doggedly follow the rules of a genre you are playing with because genres are, in the long run, just categories we invent to describe a set of elements that make up a specific mood or tone within our media. This column has always really been about blending that feeling back into your game and using what serves that agenda. In games about alternative takes on history, getting bogged down in continuity before you’ve begun will not serve you. Wreck status quo and then reassemble as you go. You’ll be a happier camper.

There are quite a lot of Alt-History games, here’s a cross-section of games that feature important moments in history. To be clear, I haven’t picked alternative histories that were possible futures when the game was written, like Aberrant.

Brave New World: The emergence of the superhero creates a dystopian society of American oppression. While a lot of supers games feature alternate takes on history, the meta-plot of this one gives it cool edge.

GURPS: That’s right, I am suggesting GURPS. This game is full of sourcebooks with alternate timelines. The atomic bomb test rips a hole to hell, Confederates rule America, Vikings raid Mexico – it’s all there already, waiting for you. As long as you don’t mind maths.

So, what do you need to do to present an alternate historical universe? Here are some pointers for the genre.

Do Research….
This is perhaps the most important thing. You’re going to find your time taken up by all kinds of odd research activities and you’ll definitely end up wasting time. In spite of this, it’s worth it because you’ll find all kinds of things that can generate plot: Glasnost, The Isle Of Hydra, The Weather Underground. Because in order to write an alternate history, we need to have and understanding of real history and once you have a grasp of things, you’re not in danger of the players telling you your alt-history is wrong. This continues throughout your campaign; stay informed.

…But Understand it is fallible.
Understand that Historical sources are often written post-fact to align the ‘facts’ of the situation with someone’s desired narrative. While in writing a dissertation this would be a problem, unless your players feel deeply about some point in history, for an Alt-History RPG you can get away with reading stuff that might only be half-true, because really you’re creating a world that could have happened, not one that definitely would have happened. I think understanding this is key to not being afraid of running this type of game. It’s your world, even if it looks like ours.

Use Cameos…
Always pull real-life figures into the game. Alternative versions of Elvis, John F Kennedy, Shakespeare, Florence Nightingale & Gary Gygax always go down well in my experience. It’s these cultural touchstones that really hammer home to players how the universe you are playing in has shifted away from our own.

…But
It’s very easy to subscribe to the ‘Great Man of History’ theory – that no matter the circumstances, special people will find a way to be special. But that’s a bit of a lie. Often the circumstances of a person’s rise to import are around and the person takes the right decision in that moment to step into the spotlight. Those circumstances are unlikely to form around that person if they aren’t in that exact time/place. So the further you deviate from the timeline, the more these people should turn up in less familiar positions. For example, in one of my games that began to diverge in the 40s but picked up speed in the sixties, Elvis still became a music legend but survived his vices and ended up dying when he stepped in front of a bullet intended for John Lennon (small-ish change), whereas Madonna, who is further down the timeline, was a female soldier on the frontlines of a war against hell, hadn’t done anything special with her life and would literally never think about a music career (Big change). The changes there are far more pronounced the longer the timeline diverges. No one has a ‘destiny’. Unless of course you’re using this format to ape Moorcock but I feel like that’s a whole other column.

Planning is for amateurs
Another thing to do is to be a bit more freeform – allow your players to shape the history, not just be part of it. Note down the historical event you are going to change, then consider five or six versions of the alternative timeline and let the players guide you. They’ll change history in ways you don’t expect but that’s part of the fun right? It’s very easy in this genre to kind of get stuck on the rails of your vision but if you give players the chance to affect established history, they are always gonna remember that time they tried to fix the Cold War and invented an 1980’s super caliphate.

That’s all for now, next week we’re going to be looking at a particular form of alt-universe that forges the best kind of hero. Join me as we throw off the chains of oppression. 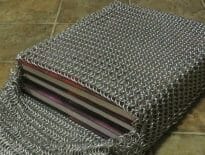 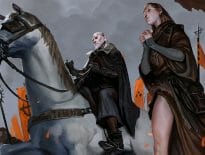