You are here: Home / Games / Tabletop & RPGs / Genre Police: Is this a DM I see before me?

A king with three daughters leaves his throne vacant in an epic tale of kinship, suffering and greed. In the wake of the death of his father, a young prince hesitates, ultimately unleashing a bloody, unstoppable conclusion. Two lovers, trying to be with each other in a city tearing itself apart die in each other’s arms without properly saying goodbye.

Welcome to tragedy. The most Anti-RPG genre ever made.

As part of our Shakespearean series, we need to look at his tragedies. But it’s worth slowing down here for a second. RPG’s are often about wish fulfilment and heroic empowerment. In content, mood and conclusion this might seem alien to someone who has only played world ending epics. But if we surrender ourselves to RPG worlds with less optimistic feelings, sometimes we can learn more about ourselves.

When I look back on my RPG experience, I find that most of my favourite moments come when the heroic narrative is upended – a moment when we realised a long D&D campaign was going to end with the cost of victory being too high or a game of Changeling when we realised our characters were horrible people. There’s scope in RPGs for tragic tales. Obviously dwelling there for an entire campaign is probably a bad plan but the players don’t have to win every conflict if you can tell an interesting story of defeat.

Tragedy is also a universal constant in our storytelling. From ancient Greece to Beckett, tales of loss and not exactly just Shakespeare’s purview. But his most famous and best work (not including the late romances) are his tragic tales. So let’s look at a key idea and structure for the implementation of tragedy and how we can bring that to bear in our games.

While at first glance it might not seem like Tragedy is a common factor in RPGs, let us just look at what we can lean on for support.

Vampire: The Masquerade: Go back and read vampire again. Ignore the trenchcoats and cool powers. Ignore even the gothpunk aesthetic for a minute. What is the game about? Loss of humanity and the compromises we make of the self in order to accomplish our overarching goals. The debate about which is more important. You have to work at it, but Vampire can still achieve those goals if set on the right path to begin with.

Alas For The Awful Sea: A PBTA game that tells the tales of a fishing village with no hope or future, Alas is maybe the purest expression of the tragic form, charting a period of transition and decline for a subset of people.

Kingdom Of Nothing: Let your friends decide what you went through, what happened that shattered you forever, as you try to live on unforgiving streets. A game that deals with the aftermath of tragedy, it’s worth checking out for its fusion of real-life themes and fantastical weirdness.

In most of his plays, Shakespeare used the five act model, which with tragedy works very well. It meant that his stories were told in five acts, each with a different aim. This experience is replicable in RPGs. We’re going to look at each of acts as what they are and how we can adapt them for a tragic RPG tale. We should note, this requires a small level of deception on your part with regards to the players. I suggest making players clear that the campaign will be about consequences and personal demons. Also, suggest that a happy ending is not guaranteed. Prepare them as best you can for things not going as they plan.

Act 1: Exposition
In this Act we largely meet the cast, setting and are introduced to the central conflict in the story – it often hasn’t kicked off yet, but we have it somewhere in the background. Characters will remark upon the problem but as of yet, they will not act heavily on it. This is largely scene setting but introduces our flaw hero. As DM, you need to view this time as the beginning of a campaign or game. Make sure that any character creation is done either around you or with enough time to talk to the player. You are looking for any character flaws in the PC. Are they arrogant? Misinformed? Bloodthirsty? Then design opening adventures or scenes that show up those character flaws. Allow the players to show the trait that will eventually cost them. Also begin to think about three or four things that come out of these sessions, unforeseen consequences that have wider reaching implications for the PC. It’s important because later, the protagonist players need to see that this was all their fault. That moment is called Agnorisis; it’s the expressive moment you are leading to and it begins here.

Act 2: Complications
In the second Act of a tragedy, complications are added and agendas come up against each other. Intrigues and actions happen with an alarming rate, the central conflict introduced earlier springs into the foreground when an unexpected event sets the ball in motion. In an RPG, our adventure proper has gotten underway. Our Central plot – as far as the players are concerned – is now foreground. As a DM you move the visible threat on the board. In a traditional RPG set up, this would be the moment where the true bad guys begin to reveal themselves. As a DM, you need to continue to chart how and when the heroes ignore this threat or ignore something else important to deal with threat. Drown them in choices so that no one is the correct one.

Act 3: Action Climax
The action reaches a high point and victory is within their grasp…. but there’s a cost. Right now that cost looks payable. As a DM you need to ramp up the action and almost pretend that this Act is the campaign ender. Make sure that the heroes are making choices that affect the world and in a moment of high drama offer a choice that has hidden knives attached. This is a difficult thing to do and you need to make sure it isn’t mentioned again for a while. This gives this new problem time to evolve in a natural way. Bear in mind: you cannot force a player to make the bad choice. If they don’t, that is great. This story is about overcoming a character flaw. But make the choice with bad consequences easier to accomplish and lean into character flaws and most people’s sense of narrative will kick in.

Act 4: Falling Action
Reversals and consequences trigger in this Act. In an action film, it’s this moment everything seems lost, in a tragedy, it seems that everything might still be ok but you still need to ramp up the tension. Take one thing that was taken for granted in the old campaign (‘These are the bad guys’, ‘This place in invulnerable’) and flip it, create problems. Create a wall of bad outcomes. Then show the players a possible way through.

Act 5: Catastrophe
Remember in Act One we charted something unexpected that fell out of one of those sessions, probably linked to a character flaw? Now is the time we introduce that threat to blot out all hope. The making of this problem must feel like the natural consequence of earlier actions, or the whole thing feel forced. If the end of a fiction is in the beginning we as audience/players are far more likely to accept the reality of it, we can connect the dots logically. Now we can allow the players to resolve the issue with a downfall, denouement or transfiguration (they lose, resolve the issue as best they can or change themselves). Remember that while we are writing a tragedy, in an RPG game, agency is more important than a definitive conclusion. You aren’t looking to screw the players, you’re trying to create a differing style or game. Shakespeare may have ended on a downer but it’s up the group as a whole to decide what goes down.

With that beast out of the way, next time we’re going to lighten up and follow Falstaff to Windsor in order to cover the comedic side of life.

Genre Police: Is this a DM I see before me? 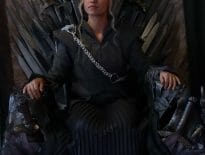 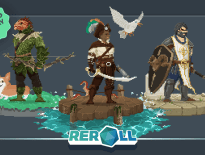