You are here: Home / Games / Tabletop & RPGs / YouTube star charm in a box for your D&D character: Ginny Di’s Library of Witticisms

When Geek Native was just a young blog, I was emailed about some clever Harry Potter inspired music videos complete with cosplay. Ginny Di was one of the stars.

As recently as six years ago, Geek Native even managed to land first look at a photograph of Ginny Di as Ayra.

Of course, since then, one of us has gone on to even greater heights and fortune.

So, er, well done Ginny. And now with Unlimited Realms, Ginny Di’s Library of Witticisms is a Kickstarter project to put one-liners and clever responses your fantasy characters could use into a handy pack of cards.

Ginny Di has over 220 thousand followers on YouTube. It’s perhaps not a surprise to discover that the £15,000 target has been met.

At the time of writing, the Library of Witticisms has collected nearly £40,000 and has 27 days still on the clock.

Ginny Di isn’t just putting her name on the project; she’s the creative lead for the project and already has videos on this theme.

Ginny Di’s Library of Witticisms is a collection of three decks designed to inspire your RPG character’s jests and quips! Whether you seek new insults to assert your dominance or smooth pickup lines to woo your paramours, this collection is also the perfect accompaniment for spells that involve mockery, flirting and causing hideous laughter!

There are stretch goals, and they are beginning to kick in. Each pack of cards will now have 2 collectable art cards of Di’s cosplay characters, and the highest goal that’s been revealed looks to be within reach. That adds 2 more.

A pledge of £22 is needed for one of the decks. There’s no PDF only version, and while I’m sure that will arch some eyebrows, I understand why. The campaign is about putting handy cards in your hand to avoid scrolling through PDFs of notes.

Two decks take a pledge of £44, economies of scale begin to click in as it only takes a promise of £58 to get all three.

The limited to 100 only signed decks sold out in a flash.

The expected delivery on the project is July 2021, which feels just around the corner.

YouTube star charm in a box for your D&D character: Ginny Di’s Library of Witticisms 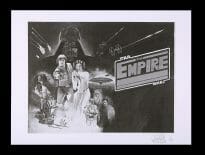