There are three truths you must know.

How do you escape? You ascend.

Fire Ruby Designs’ Esoterica is a modern occult fantasy. Players are adepts who can wield magic in the mundane world while they try to progress through to an unknown otherworld on the other side of the Veil.

Mechanically, Esoterica is nice and simple. It uses the Mini Six system from AntiPaladin which you can download for free. It’s the same system as used in Fire Ruby Designs’ Summerland, and if you’ve read that RPG, you’ll find some of the examples of how the mechanics work very familiar.

PCs have dice pools which allow a certain number of d6s to be rolled in response to challenges. Values are added up and if the result is high enough then the PC has succeeded. There’s a lovely narrative system built in through ‘tags’ which describe the PCs in both positive and negative ways and which creative storytelling allow you to weave into the current challenge for bonus or penalties.

Esoterica’s greatest success, though, is a system of checks and balances which come together to ensure that PC action (or inaction) creates the next wave of drama and story.

The first in this system of checks and balances are Cabals. Some fundamental spells require more than one Adept to cast. As a result Cabals form and so PCs become either potential recruits or potential enemies to every other Cabal out there. It’s not possible to stand on the sidelines in a world were your power and potential can be sensed.

Power itself is part of the story. As PCs use their magic, they will eventually gain more power, and this takes them one step closer to escaping the lie and ascending. However, it’s more likely that the use of power will cause corruptions known as Stains.

Stains are horrible. Even at low levels, the corruption of Stains manifests as open sores on PCs’ faces and other attributes that most players will strive hard to address, cure and avoid if they can.

Each time a PC suffers a corruption then otherworldy horrors known as Hungers merge through the Veil to stalk them. These Hungers are always as powerful as the infected PC, and they are sneaky, sly, smart and very dangerous. It is possible to outsmart them, escape or even destroy it (especially with the help of someone else) but in the likely event of a PC succumbing to a Hunger then they lose a Tier of Power.

Fortunately, there is a way to cope with Stains and corruptions; with Soul Jars.

Rather than suffer the adverse effects of magic adepts can store them in rare Soul Jars instead. Esoterica stories, therefore, always include an element of finding Soul Jars and protecting the few the Cabal already has. No one can create them.

Losing a Soul Jar is horrible news. When a jar is opened by a rival Adept and the correct ritual performed on it, a ceremony necessary to tune the Soul Jar to the new owner, all the corruption currently locked away in it comes flooding out and straight into the Adepts it should be associated with. In other words, a perfectly healthy Adept can lose a Soul Jar and then, without warning, be torn down by an incoming wave of sickly and potentially fatal curses.

There are three types of magic that PC Adepts can use; Arts, Mysteries and Rituals.

There are three types of Arts; Domination, which is power over others, Mastery, which is power over yourself, and Insight, which is knowledge from beyond the Veil. Adepts have three dice in their strongest Art, two dice in their second strongest Art and one die in their weakest art. This distribution defines what type of Adept they are. For example, Domination 3D, Mastery 2D and Insight 1D mean that the Adept is a Magician and requires two hours of study to refresh their power. On the other hand, Domination 1D, Mastery 3D and Insight 2D mean the Adept is an Ascetic and will need at least two hours of peaceful medication to refresh their power.

Arts can only influence probability. You can’t become invisible with an Art, but you might be able to make it so that no one sees you.

Mysteries are used to achieve the impossible. They are the spells of the system and Adepts only have access to a few. An example Mystery is Clairvoyance which allows the Adept to perceive people and objects hidden from sight or Levitation which the Adept can use to float.

Rituals are used when the Adepts don’t have the Mysteries they need or when it is necessary for the Cabal to work together to achieve a strong enough success.

It’s the balance of power that makes Esoterica work so well as a setting. It’s like a clockwork machine where even a small click of a gear somewhere in the device will result in cogs and gears starting to move elsewhere until there is a full rotation and the consequences circle back to the start.

However, there is one important condition underpinning this; PCs must be trying to Ascend. There is plenty that GMs can do to drag PCs into a wider story, but characters who do not accept the three truths of the game do not work as PCs. There’s no point to them.

Fortunately, any gaming group tempted by Esoterica are likely to be mature gamers who understand and accept the responsibilities of being good players and a fair GM. Esoterica begins and concludes with whole sections on how to set up the atmosphere of the game and how to run it.

Author Greg Saunders recommends that before the game begins, before character generation and before even session zero, the group agrees on the themes of the game. Suggested topics include; magic, horror, mystery or bonds. There’s also elements of adventure; action, investigation/discovery and even survivalism.

It would be entirely possible to use Esoterica as an alternative to Kult in those scenarios where the horror of an unknown and magical world begins to pollute the mundane world. In terms of horror, the themes feel very similar, but whereas Kult takes you beyond the Veil (if you let it), Esoterica does not. Escaping the mundane world is the end game in Esoterica even if both RPGs are steeped in Gnosticism.

It is also entirely possible to use Esoterica as an alternative Call of Cthulhu. There’s a whole section in the game about adapting it to the Mythos. In this, the Hungers are the named creatures from H.P. Lovecraft’s stories (or nameless ones), and there’s more emphasis on the eventual doom of the heroes.

As it happens, Liminal, a recent RPG from Wordplay games overlaps significantly with Estoerica, and I can honestly see gamers in their local FLGS with a copy of each in hand and wondering which to go for. One is the Secret World, and the other is the Hidden World. Both are good, but Esoterica is darker and more likely to steer into horror and Esoterica has stronger reasons for PCs to stick together (Cabals) than Liminal.

I love the art in Esoterica. It is Kickstarter funded and used well. I only have the PDF of the game and so don’t get the full impact of the full spread art inserts.

There’s a mix of imagery in the game, and this is a nod towards the number of themes and styles you can conjure with the rules and setting. Some of the illustrations in the book veer towards Hellraiser style occult, others are more surreal, some X-Files modern and some more suggestive of Dead Space but they’re all likely to inspire scenes and campaign ideas.

I struggle with the font used for headings. Yep, it’s an arcane scrawl script. It’s not terrible, but I’m old, and it makes me squint. I suspect it works better in print than it does on screen.

More significantly, this is not a game that makes heavy use of pull out quotes, boxes and tables. You need to read to get answers; scanning isn’t going to find what you’re looking for. This layout choice, of course, is countered by the fact that Esoterica is rules light. I found myself scrolling up and down in the powers section, hunting up and down from Mysteries to Arts, in particular. I’m sure this is simply due to the fact I’ve only had the game for a little while, and after two or three campaigns it would no longer be an issue.

Esoterica is good enough that I fancy playing two or three campaigns, too. I like urban fantasy with a dark shadow, and this RPG hits that particular niche fully. If you enjoy Summerland then absolutely check out Esoterica. If you fancy roleplaying in a world where Clive Barker meets the X-Files then also give Esoterica a shot. I think you’ll like it. 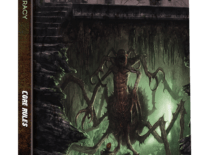 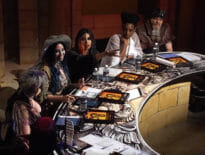 Online Shows Team D&D just beat the Mad Men at their own g…
💰 Copper Coins 💰 Geek Native is an affiliate and may earn commission on purchases you make from third-party sites.
🍪 Privacy & Cookies 🍪 The site uses cookies to survive. By accessing the site, you agree to use your browser to control cookie use or take 1d4-3 privacy damage (tracking). If you defeat cookies via ad blocking, please consider the Patreon. An intro to cookies, and how to control them, can be found here. I Manage Cookies